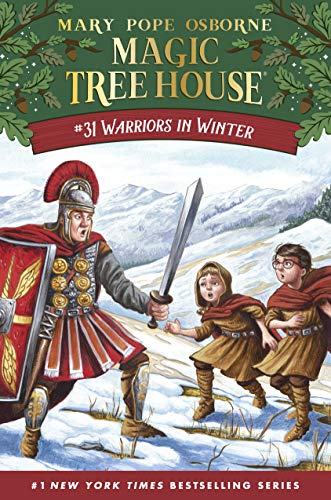 Product Description Travel back in time in the magic tree house with Jack and Annie in this #1 bestselling series and meet the greatest warriors of all--the Romans! We are warriors! Jack and Annie have met knights, pirates, ninjas, and Vikings, but they have never met the most fearsome warriors of all: Roman soldiers. When the magic tree house whisks them back to the early 100s AD, Jack and Annie find themselves in a Roman camp. Their mission: Be like a warrior. That is easier said than done! The Roman soldiers are much scarier in person--and suspicious of strangers. Then a mysterious man riding a black horse gives Jack and Annie some advice to help them on their mission. But the man may not be who he seems. Will Jack and Annie be good warriors? Can they learn what makes the Roman soldiers so great? And who is the mysterious rider . . . ? Did you know that there's a Magic Tree House book for every kid? Magic Tree House: Perfect for readers who are just beginning chapter books Merlin Missions: More challenging adventures for the experienced reader Fact Trackers: Nonfiction companions to your favorite Magic Tree House adventures If you're looking for Merlin Mission #31: Summer of the Sea Serpent, it was renumbered as part of the rebrand in 2017 as Merlin Mission #3. About the Author MARY POPE OSBORNE is the author of the New York Times #1 bestselling Magic Tree House series as well as co-author of the Magic Tree House Fact Tracker series, along with her husband, Will, and her sister, Natalie Pope Boyce. For more information, visit the Magic Tree House® website at MagicTreeHouse.com! AG FORD is a New York Times bestselling children's book illustrator and recipient of two NAACP Image Awards. He grew up in Dallas with his mom, his dad, two sisters, and one brother. He majored in illustration at the Columbus College of Art and Design. He lives with his family in Frisco, Texas. Visit him online at agfordillustration.com. Excerpt. © Reprinted by permission. All rights reserved. “Wake up, Jack.” Jack opened his eyes. The light was dim outside his window. His sister, Annie, was standing by his bed. “What’s going on?” he asked. “I heard a weird sound outside,” said Annie. “And guess what I saw!” “What?” said Jack. “An eagle!” said Annie. “A huge eagle. It was sitting on top of the lamppost in our yard.” “No way,” said Jack. “Yes, way,” said Annie. “I’ll bet Morgan sent him.” Jack sat up in bed. He threw off his covers. “I’m coming!” he said. “Hurry. We have to get back home before Mom and Dad get up. Meet you on the porch.” Annie slipped out of the room. Jack climbed out of bed. He changed into his jeans, sweatshirt, and sneakers. He grabbed his backpack. Then he crept downstairs and went out to the front porch. Annie was waiting in the chilly, damp air. Dawn was breaking. “There!” she whispered. She pointed toward the lamppost in front of their house. An eagle was perched on top. He was dark brown, except for a ring of golden-brown feathers around his neck. He stared at them with piercing eyes. “Oh, man, that’s a golden eagle,” whispered Jack. The eagle spread his wings. He rose into the early-morning sky and flew toward the woods. “Follow him!” said Jack. Jack and Annie ran down the porch steps. They crossed their yard and dashed down the sidewalk after the eagle. “There!” said Annie, looking up. She pointed to the bird gliding above the Frog Creek woods. Jack and Annie crossed the street. They hurried between the shadowy trees, until they came to the tallest oak. “Whoa!” said Jack. The eagle was perched on the roof of the magic tree house. “Yay!” said Annie. “You were right!” said Jack. They climbed up the rope ladder and into the tree house. Sunlight streamed onto the floor. It shined on two small wooden tablets. Next to the tablets was a scroll. “A message from Morgan!” said Annie. She unrolled the scroll and read: Land by the Danube Many years ago. Find a Roman