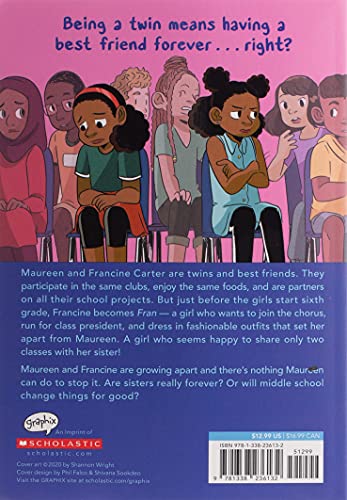 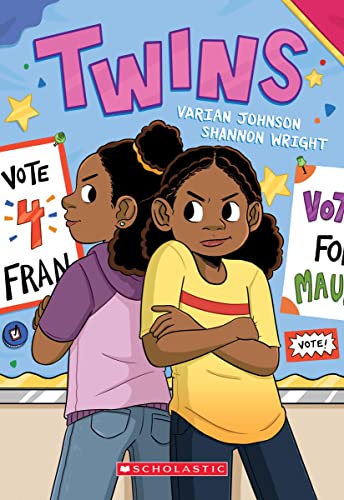 Product Description Coretta Scott King Honor author Varian Johnson teams up with rising cartoonist Shannon Wright for a delightful middle-grade graphic novel! Maureen and Francine Carter are twins and best friends. They participate in the same clubs, enjoy the same foods, and are partners on all their school projects. But just before the girls start sixth grade, Francine becomes Fran -- a girl who wants to join the chorus, run for class president, and dress in fashionable outfits that set her apart from Maureen. A girl who seems happy to share only two classes with her sister!Maureen and Francine are growing apart and there's nothing Maureen can do to stop it. Are sisters really forever? Or will middle school change things for good? From School Library Journal Gr 3-7-The start of sixth grade has not been smooth sailing for identical twins Francine and Maureen Carter, who are both Black. Francine, "the talker," is eager for new challenges and experiences and more time away from her sister/best-friend-oh, and she goes by "Fran" now, please. Meanwhile, Maureen, "the thinker," misses dressing alike and having all her classes with her twin, and is especially intimidated by the lunchroom and Cadet Corp. When Maureen discovers that the girls' separate classes are due not to a scheduling error but to Francine's interference, her anger spurs her to action and she challenges her sister by running against her for student council president. As the girls develop campaign strategies and try to best each other, will they permanently ruin the bond they once had? The twins' transforming relationship captures all the fraught possibilities of adolescence-the fear of change and the excitement of potential. A fully realized array of friends and family who help with (and occasionally add to) the drama create a world that readers will wish they were a part of. Wright's colorful artwork brings this endearing cast of characters to life with a dynamic range of expressiveness that suits the story's emotional highs and lows and many warm laughs. VERDICT A must-read for middle grade comics lovers. Expect high demand from fans of comics like those by Svetlana Chmakova, Jerry Craft, and Raina Telgemeier.-Darla Salva Cruz, Suffolk Cooperative Lib. Syst., Bellport, NYα(c) Copyright 2011. Library Journals LLC, a wholly owned subsidiary of Media Source, Inc. No redistribution permitted. Review Praise for Twins: National Indie Bestseller Junior Library Guild Selection NPR Best Book Washington Post Best Children's Book Kirkus Reviews Best Book Horn Book Best Book School Library Journal Best Book Booklist Best Book for Youth Barnes & Noble Best Book Today.com Best Book for Kids, Tweens, and Teens Nerdist Best Comic Chicago Public Library Best Book University of Pennsylvania Graduate School of Education Best Book for Young Readers Cooperative Children's Center Best Book Bank Street College of Education Best Children's Book Mike Wieringo Comic Book Industry Award Winner Recipient of five starred reviews ★ "Wright's artwork, crisp and colorful, does a masterful job of tracking the twins's emotional arcs through expressive composition, and Johnson's impeccable pacing keeps things moving while still making room for rich development. A beautiful reflection on sisterhood and coming of age that belongs in every collection." -- Booklist, starred review ★ "The sibling bond is palpable and precious as each conflict and triumph pushes them apart or pulls them together.... A touching, relatable story of identity, sisterhood, and friendship." -- Kirkus Reviews, starred review ★ "A must-read for middle grade comics lovers. Expect high demand from fans of comics like those by Svetlana Chmakova, Jerry Craft, and Raina Telgemeier." -- School Library Journal, starred review ★ "Johnson and Wright have expertly teamed up to create a relatable story for all middle schoolers." -- The Horn Book, starred review ★ "An engaging read that speaks to worries of burgeoning self-ide

Amazing
Great
Average
High
This is absolutely the best time to buy. Don’t miss out, there's 41% probability of this price being higher soon. Buy now.
Buy on Amazon

Disney Maps: A Magical Atlas of the Movies We Know and Love

Twins A Graphic Novel Twins 1 1, is it available on Amazon?

Yes! But at Pricepulse we inform you when is the lowest price to buy the Twins A Graphic Novel Twins 1 1

Should I buy the Twins A Graphic Novel Twins 1 1 now?

What is the current price of Twins A Graphic Novel Twins 1 1?

What was the lowest price for the Twins A Graphic Novel Twins 1 1?