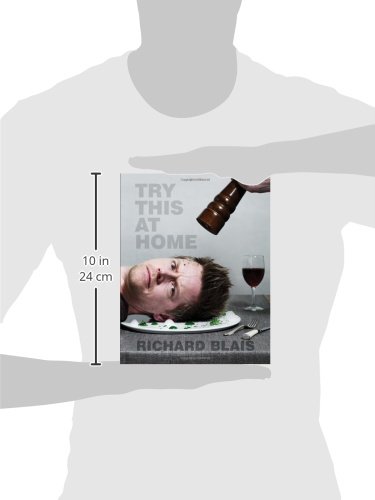 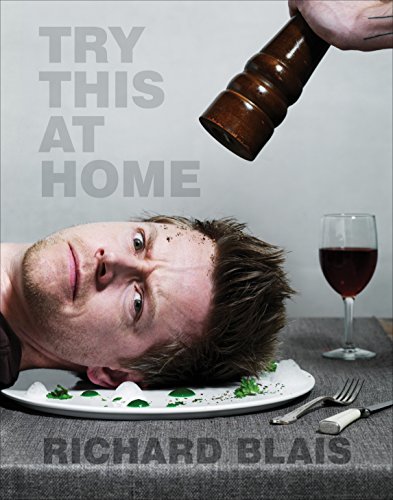 Product Description From Bravo’s Top Chef All-Stars winner Richard Blais comes his very cool debut cookbook for home cooks looking to up their game with more excitement in the kitchen. This is accessible and fun, and includes the signature recipes, flavor combinations, and cooking techniques that have made him such a popular chef. A new way to make a dish is always on Richard Blais’s mind. He has a wildly creative approach—whether it’s adding coffee to his butter, which he serves with pancakes; incorporating the flavors of pastrami into mustard; making cannelloni out of squid; microwaving apple sauce for his pork chops; or cooking lamb shanks in root beer. In his debut cookbook, with equal degrees of enthusiasm and humor, he shares 125 delicious recipes that are full of surprise and flavor. Plus there are 25 variations to add more adventure to your cooking—such as making cheese foam for your burger or mashed sous vide peas to serve alongside your entrée. Dive into an exploration of your kitchen for both creativity and enjoyment. Now try this at home! From Booklist Southern cooking isn’t what it used to be. Although the cuisine of the American South has become fashionable all across the nation, its evolution in the past several decades has taken it a good distance from its roots. At his Spence restaurant in Atlanta, celebrity chef Blais combines tradition with postmodern technique for spectacular results, and now he offers his recipes for home kitchens. The first hint that the cookbook’s title imperative may prove no small challenge comes right up front in Blais’ equipment inventory, a list calling for a siphon, a sous-vide cooker, and a smoking gun. Since few home kitchens have access to such tools, Blais’ fans may need to consider the book’s more accessible recipes, such as quail potpie, pasta with sausage and broccoli rabe, and lamb shanks braised in root beer. The spiky-coiffed chef also shares his formula for his remarkable hair gel: duck fat and liquid nitrogen. --Mark Knoblauch Review “The most innovative chef on Top Chef, Richard Blais brings us creative, thought-provoking recipes for the home cook. Let him make you look like a rock star.” —GRANT ACHATZ   “Luckily for the rest of us, Richard didn’t heed his mom, nor does he plan to cease playing with his food any time soon.  And now, in Try This at Home, he has managed to cleanly and clearly break down his process so that you can have a good time trying out some of his methods in your own kitchen.  This is a cookbook from a serious chef who knows how to make fun of himself and lighten up the whole process.  Cooking need not be an overly complicated, overwrought process with eighteen ingredients and fourteen pans.  Though you can try using a good iSi siphon and a smoking gun (not that kind of smoking gun).  And occasionally some nitrous oxide.  Oh, and good ingredients, of course.  Plus a spirit of fun.  You have the cookbook.  Now, as your mother would say, “go play!” —from the foreword by TOM COLICCHIO “Of all the contestants on Top Chef, Richard Blais was easily the most fascinating to watch. His food pays solid respect to the past while looking fearlessly to the future. Try This at Home takes Richard’s years of thinking, experimenting, trying and failing, and trying and succeeding, and brings it all home in thrilling and decidedly useful ways. This is the fast, accessible route to looking like a genius at your next dinner.” —ANTHONY BOURDAIN “I've known Richard for a long time now and his cooking has always been a huge inspiration. Try This at Home totally captures his creativity, his talent, and his awesome sense of humor.” —SEAN BROCK “I’ve been rooting for Richard Blais since his first season on Top Chef and always wondered, How’d he do that? Now I finally have the answers . . . and I will definitely try these recipes at home!” —ZOOEY DESCHANEL “Richard has created a book that I wish I had written—a book that will inspire not only prof

Amazing
Great
Average
High
Although this is an Average price, there's a 74% probability this price will be lower. If you can wait, our advice is to Watch it.
Buy on Amazon

Try This At Home Recipes From My Head To Your Plat, is it available on Amazon?

Yes! But at Pricepulse we inform you when is the lowest price to buy the Try This At Home Recipes From My Head To Your Plat

Should I buy the Try This At Home Recipes From My Head To Your Plat now?

Although this is an Average price, there's a 74% probability this price will be lower. If you can wait, our advice is to Watch it.

What is the current price of Try This At Home Recipes From My Head To Your Plat?

What was the lowest price for the Try This At Home Recipes From My Head To Your Plat?