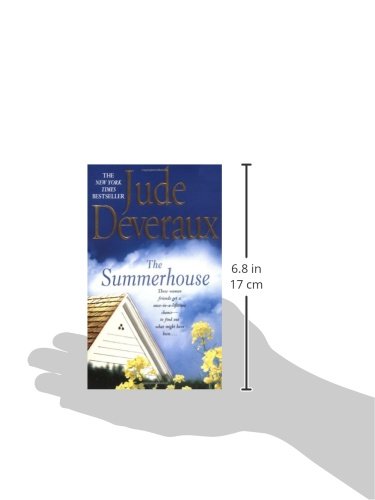 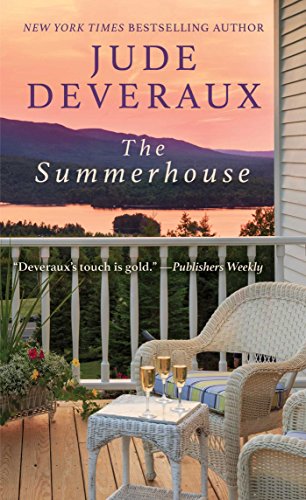 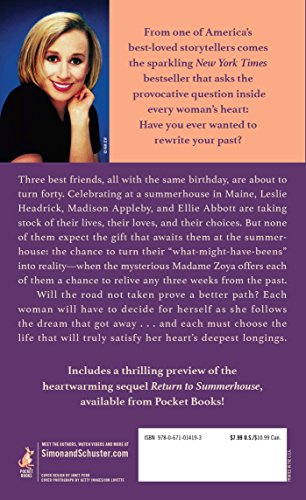 Product Description Jude Deveraux’s marvelous New York Times bestseller is a touching and delightful exploration of the longings that live deep inside every woman’s heart, featuring three friends who get a once-in-a-lifetime chance to find out what might have been... Have you ever wanted to rewrite your past? Three best friends, all with the same birthday, are about to turn forty. Celebrating at a summerhouse in Maine, Leslie Headrick, Madison Appleby, and Ellie Abbott are taking stock of their lives and loves, their wishes and choices. But none of them expect the gift that awaits them at the summerhouse: the chance for each of them to turn their “what-might-have-beens” into reality... Leslie, a suburban wife and mother, follows the career of a boy who pursued her in college wonders: what if she had chosen differently? Madison dropped a modeling career to help her high school boyfriend recover from an accident, even though he’d jilted her. But what if she had said “no” when her old boyfriend had called? Ellie became a famous novelist, but a bitter divorce wiped out her earnings—and shattered her belief in herself. Why had the “justice” system failed her? And could she prevent its happening the second time around? Now, a mysterious “Madame Zoya,” offers each of them a chance to relive any three weeks from the past. Will the road not taken prove a better path? Each woman will have to decide for herself as she follows the dream that got away...and each must choose the life that will truly satisfy the heart's deepest longings. About the Author Jude Deveraux is the author of more than forty New York Times bestsellers, including Moonlight in the Morning, The Scent of Jasmine, Scarlet Nights, Days of Gold, Lavender Morning, Return to Summerhouse, and Secrets. To date, there are more than sixty million copies of her books in print worldwide. To learn more, visit JudeDeveraux.com. Excerpt. © Reprinted by permission. All rights reserved. The Summerhouse One Leslie Headrick looked out her kitchen window at the old summerhouse in the back. Now, in early fall, the vines and twisted stems of the old roses nearly covered the building, but in the winter you could see the glassed-in porch well. You could see the peeling paint and the cracked glass in the little round window above the front door. One of the side doors was hanging on one hinge, and Alan said it was a danger to anyone who walked past the place. In fact, Alan said that the whole structure was a danger and should be torn down. At that thought, Leslie turned away from the window and looked back at her beautiful, perfect kitchen. Just last year Alan had gutted her old kitchen and put in this one. “It’s the best that money can buy,” he’d said about the maple cabinets and the solid-surface countertops. And Leslie was sure that it was the best, but she missed her ratty old Welsh dresser and the little breakfast nook in the corner. “That table and those chairs look like something kids made in a shop class,” Alan had said, and Leslie had agreed—but their perspective of what was beautiful differed. As always, Leslie had given in to her husband and let him put in this showplace of a kitchen, and now she felt that she was ruining a piece of art when she baked cookies and messed up the perfect surfaces that scratched so easily. She poured herself another cup of tea from the pot, strong, black English tea, loose tea, no wimpy tea bags for her, then turned back to again look out at the summerhouse. This was a day for reflecting because in three more days she was going to be forty years old—and she was going to celebrate her birthday with two women she hadn’t seen or heard from in nineteen years. Behind her, in the hallway, her two suitcases were packed and waiting. She was taking a lot of clothing because she didn’t know what the other two women were going to be wearing, and Ellie’s letter had been vague. “For a famous writer, she doesn’t say much,” Alan had said in an u

The Summerhouse, is it available on Amazon?

Yes! But at Pricepulse we inform you when is the lowest price to buy the The Summerhouse

Should I buy the The Summerhouse now?

What is the current price of The Summerhouse?

What was the lowest price for the The Summerhouse?