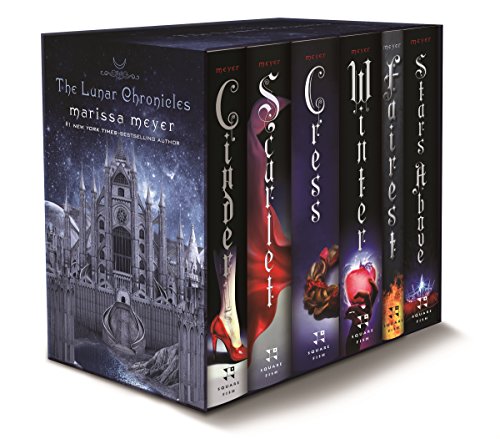 About the Author Marissa Meyer is the #1 New York Times–bestselling author of the Renegades Trilogy, The Lunar Chronicles series, the Wires and Nerve graphic novels, and The Lunar Chronicles Coloring Book. Her first standalone novel, Heartless, was also a #1 New York Times bestseller. Marissa created and hosts a podcast called The Happy Writer. She lives in Tacoma, Washington, with her husband and their two daughters. Product Description The #1 New York Times-bestselling series that brought fans a complex and thrilling world of cyborgs and evil queens, available together for the first time in one beautiful boxed setOnce upon a time, in the future . . . .The Lunar Chronicles are futuristic retellings of classic fairy tales. In Cinder, a teenage cyborg (half human, half machine) must deal with a wicked stepmother, start a rebellion against the evil Queen Levana, and decide how she feels about a handsome prince. As the series continues, Cinder forges alliances with Scarlet, a spaceship pilot who is determined to solve the mystery of a missing loved one―with the help of a magnetic street fighter named Wolf; Cress, a computer hacker who is imprisoned by Queen Levana; and Winter, a princess who's in love with a commoner, and who discovers that Cinder, Scarlet, and Cress may hold the key to saving her kingdom―and the world.Follow Marissa Meyer's The Lunar Chronicles from the beginning with Cinder, Scarlet, Cress, Fairest: Levana’s Story, Stars Above (a collection of stories set in the Lunar Chronicles universe), and the epic conclusion, Winter. Praise for the Lunar Chronicles:"A mash up of fairy tales and science fiction . . . a cross between Cinderella, Terminator, and Star Wars." ―Entertainment Weekly "Prince Charming among the cyborgs." ―The Wall Street Journal Review Praise for the Lunar Chronicles:#1 New York Times-Bestselling SeriesUSA Today BestsellerPublishers Weekly Bestseller"Terrific." ―Los Angeles Times"Marissa Meyer rocks the fractured fairytale genre." ―The Seattle Times"Epic awesome." ―Bustle"A binge-reading treat." ―MTV"Takes the classic to a whole new level." ―NPR "Singing mice and glass slippers are replaced with snarky androids and mechanical feet in this richly imagined and darkly subversive retelling of ‘Cinderella.' " ―The Bulletin on Cinder"It's another Marissa Meyer roller-coaster ride, part science fiction/fantasy, part political machination with a hint of romance." ―Booklist, starred review of Scarlet "Meyer continues to show off her storytelling prowess. The next installment cannot come fast enough." ―Publishers Weekly, starred review of Cress “Meyer's series has sold well and achieved a degree of acclaim. This conclusion's cinder-block size should only drum up further interest.” ―Booklist, starred review of Winter"Thorough world-building and fascinating character development will thrill fans and entice new readers." ―School Library Journal on Fairest “Those who have enjoyed Meyer’s sci-fi fairy tale retellings will relish the chance to dip their toes more deeply into this rich world.” ―VOYA, starred review for Stars Above