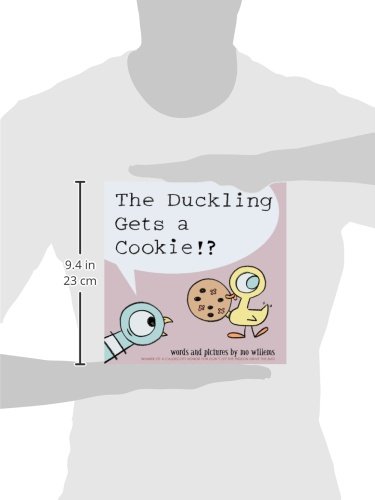 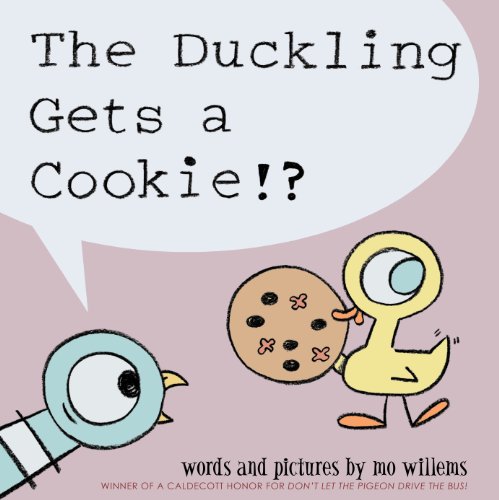 Product Description The Duckling asks for a cookie -- and gets one! Do you think the Pigeon is happy about that? Amazon.com Review : The Pigeon is back (hooray!) and this time the drama centers on an adorable little duckling who gets a cookie just by asking-- politely. Just by asking?! Politely reminds the duckling, but the Pigeon is already off on a hilarious rant about all the things he asks for--many of which readers of the earlier Pigeon books will remember--ending with the all-too-familiar refrain, “It’s not fair.” Author Mo Willems adds a new twist to this Pigeon story by juxtaposing Pigeon’s familiar high volume theatrics with the calm simplicity of a soft-spoken duckling. As a parent, I appreciate the book’s message about the power of politeness and the rewards of sharing (warning: cookies are involved), yet the story never loses the jovial, high-spirited quality that makes the Pigeon books so popular with kids and the adults who read to them. --Seira Wilson Amazon Exclusive: The Pigeon: A Life in Pictures (Click on images to enlarge) Due to a lack of other material, we decided to make the December issue a sketchbook with just my cartoons. I have been producing small cartoon and story sketchbooks for clients and pals every year since then. Born in the margins of a 1997 notebook filled with potential picture book ideas, he was complaining that his ideas were better than mine. To mollify him, I put him in that year’s sketchbook. was much longer than the final published volume, but some of the lines were the same. and rejected my picture book ideas. She suggested I revisit my sketchbook with an eye to turning it into a picture book. My wife was working at a school library at the time and had read the sketchbook to her kids, who had enjoyed it. So I suppose it wasn’t too crazy an idea. I started to revise the layout and work with color. after several dozen rejections because the book was “unusual,” an editor decided that “unusual” was a good thing. Plus, it made her laugh. I began reworking and rewriting. The Pigeon was now starting to look more like his mature self. was published in April 2003 and, to my surprise, proved to be popular quite quickly. Thankfully, that Pigeon doodle in the notebook back in 1997 was so insistent. He was right! From Booklist Pigeon is back, in all of his indignant, passive-aggressive glory, overwrought this time at one gross injustice: a cute little duckling is now on the scene and has been rewarded a cookie (with nuts) for doing nothing more than asking for it politely. Pigeon pulls out all of the usual pigeon stops—coy glances, cartwheels, and crocodile tears—in the hopes of securing a cookie for himself . . . and it works! The duckling shares. As with the other titles in the Pigeon series, simple pencil drawings on pale, blank backgrounds focus our attention on the characters’ interactions. Willems has an extraordinary ability to convey immediate, deep characterization with a few deft strokes. He knows, too, how to spread the action across a picture book, carefully managing the panels and page turns to ramp up the drama. Fans will delight at another outing, and the protagonist’s indelible pigeonality will welcome newcomers to the club. HIGH-DEMAND BACKSTORY: Pigeon is a beloved character, and his legions of fans will clamor for this, the seventh Pigeon book from hugely popular, award-winning Willems. Preschool-Kindergarten. --Thom Barthelmess Review Everyone's favorite grouch of a fowl returns, though the spotlight is firmly fixed elsewhere. Never content to be merely a supporting character, The Pigeon nonetheless takes a backseat in a story in which The Duckling asks for and receives a cookie with nuts. Incensed, The Pigeon proceeds to rant about the various items and impossibilities he has asked for over the years, ignoring point blank the fact that The Duckling got his cookie by asking politely. At the end of the expected meltdown, the smal

Amazing
Great
Average
High
Although this is an Average price, there's a 75% probability this price will be higher. Our advice is Buy Now.
Buy on Amazon

Eyes That Kiss in the Corners

The Duckling Gets A Cookie Pigeon Series, is it available on Amazon?

Yes! But at Pricepulse we inform you when is the lowest price to buy the The Duckling Gets A Cookie Pigeon Series

Should I buy the The Duckling Gets A Cookie Pigeon Series now?

Although this is an Average price, there's a 75% probability this price will be higher. Our advice is Buy Now.

What is the current price of The Duckling Gets A Cookie Pigeon Series?

What was the lowest price for the The Duckling Gets A Cookie Pigeon Series?