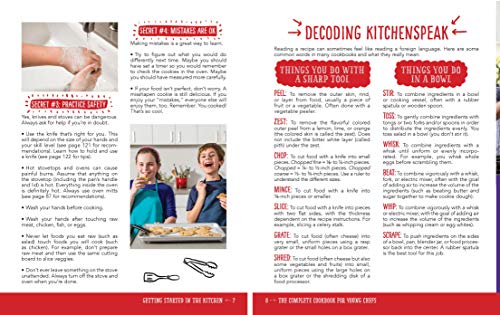 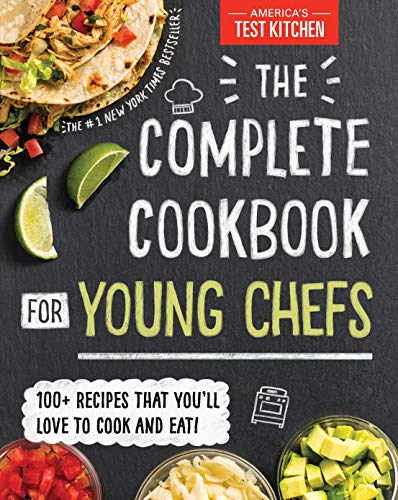 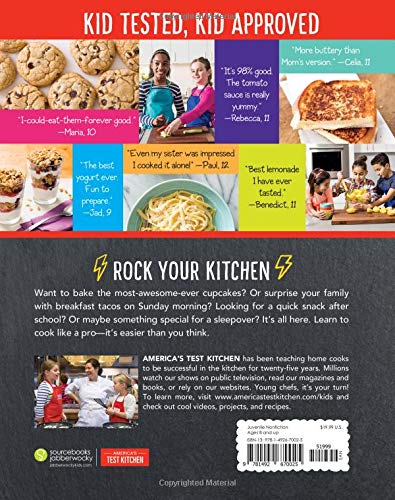 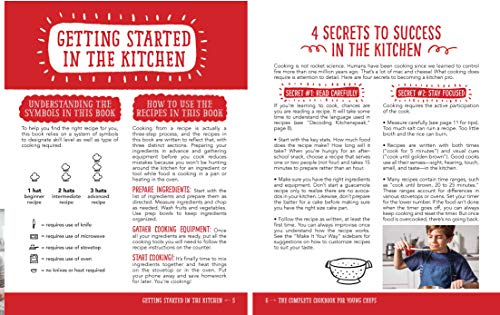 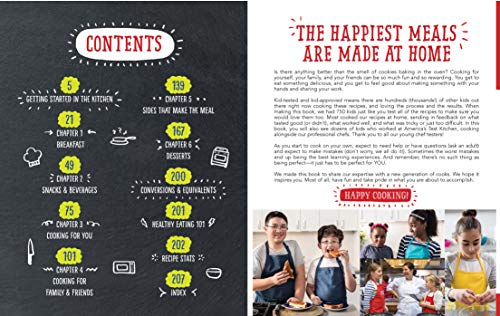 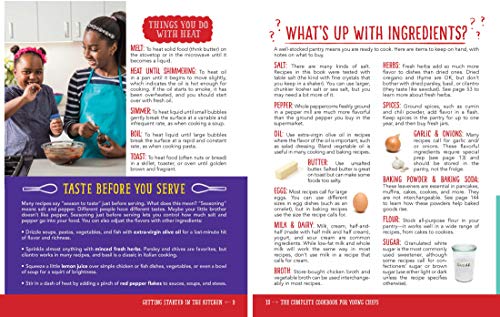 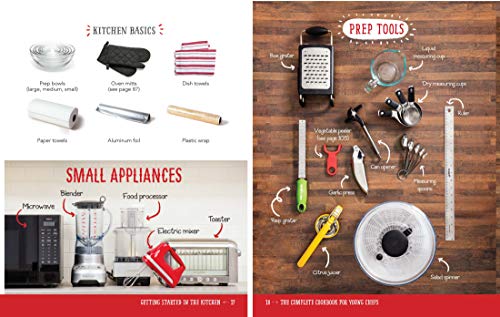 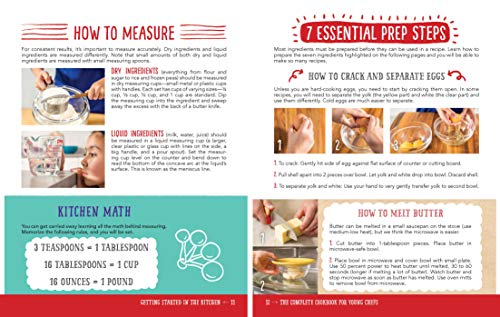 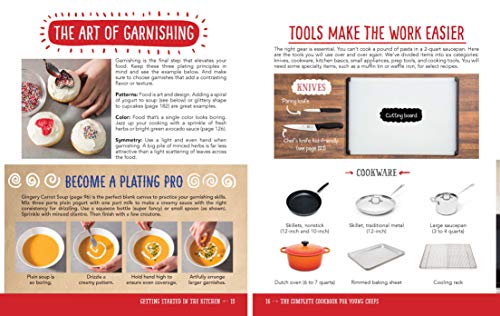 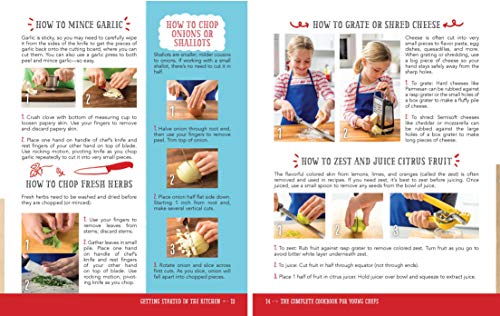 Product Description The #1 New York Times Best Seller!An Amazon Best Book of 2018!IACP Award Winner Want to bake the most-awesome-ever cupcakes? Or surprise your family with breakfast tacos on Sunday morning? Looking for a quick snack after school? Or maybe something special for a sleepover? It's all here. Learn to cook like a pro―it's easier than you think. For the first time ever, America's Test Kitchen is bringing their scientific know-how, rigorous testing, and hands-on learning to KIDS in the kitchen! Using kid-tested and approved recipes, America's Test Kitchen has created THE cookbook every kid chef needs on their shelf. Whether you're cooking for yourself, your friends, or your family, The Complete Cookbook for Young Chefs has delicious recipes that will wow! Recipes were thoroughly tested by more than 750 kids to get them just right for cooks of all skill levels―including recipes for breakfast, snacks and beverages, dinners, desserts, and more. Step-by-step photos of tips and techniques will help young chefs feel like pros in their own kitchen Testimonials (and even some product reviews!) from kid test cooks who worked alongside America's Test Kitchen will encourage young chefs that they truly are learning the best recipes from the best cooks. By empowering young chefs to make their own choices in the kitchen, America's Test Kitchen is building a new generation of confident cooks, engaged eaters, and curious experimenters. From School Library Journal Gr 4 Up-This cookbook contains over 100 kid-tested recipes and 20 desserts from America's Test Kitchen and is contemporary eye-candy for middle grade readers and teens. Each recipe includes short testimonials from some of the 750-plus kids who were part of the test group, making the book fun and interactive. The cookbook also features informational sections for new chefs, such as "Getting Started in the Kitchen" and "Conversions and Equivalents." Taking a stance on nutrition, the work provides a section on "Healthy Eating 101" in the back matter, which includes information dedicated to the U.S. Department of Agriculture's MyPlate system of five food groups. The design of the book is busy and blocky, reminiscent of Pinterest or Instagram, with informational asides and related tidbits with snappy headings. The organization follows a similar tact, including general information-such as how to choose the right kid-friendly knife-among the recipes, rather than in the front matter of the book that is dedicated to "Getting Started in the Kitchen." The pictures are small (there are no full-page spreads) and few step-by-step photos are included. Younger cooks and emergent readers may feel overwhelmed by the sheer enormity of information contained on a page, as the format sometimes fights the procedural and chronological nature of a recipe. VERDICT Despite some flaws, this is a must-have book to update tween cookbook collections-and a great holiday buy, too.-Shannon O'Connor, Unami Middle School, Chalfont, PAα(c) Copyright 2011. Library Journals LLC, a wholly owned subsidiary of Media Source, Inc. No redistribution permitted. Review "For kids who are interested in cooking... [The Complete Cookbook for Young Chefs] introduces kids to all the basics... and of course there's a whole lot of easy and very tasty recipes to try." - NPR Morning Edition "The inviting, encouraging tone, which never talks down to the audience; emphasis on introducing and reinforcing basic skills; and approachable, simplified recipes make this a notable standout among cookbooks for kids." - Booklist, starred review "What a great way to encourage a child to find fun in the kitchen!" - Tribune "The perfect gift... Any kid who spends enough time with this book will learn enough to at least make their own school lunches-if not the occasional family meal" - Epicurious "a must-have book... a great holiday buy, too" - School Library Journal "Inspiring not just a confidence in executing delic

Current price$11.85
Since 2 months
Average price$13.85
Based on 3 years
Lowest price ever$8.01
18 months ago
Highest price ever$19.99
3 years ago
Amazing
Great
Average
High
This is a great price to buy! There's a 62% probability this price will be higher. Our advise is Buy it now.
Buy on Amazon

Kid Chef: The Foodie Kids Cookbook: Healthy Recipes and Culinary Skills for the New Cook in the Kitchen

Kid Chef: The Foodie Kids Cookbook: Healthy Recipes and Culinary Skills for the New Cook in the Kitchen

Boynton's Greatest Hits The Big Green Box: Happy Hippo, Angry Duck; But Not the Armadillo; Dinosaur Dance!; Are You A Cow?

The Cookbook for Kids (Williams-Sonoma): Great Recipes for Kids Who Love to Cook

The Tale of the Mandarin Duck: A Modern Fable

How to Catch a Mermaid

Would You Rather be a Bullfrog? (Bright & Early Board Books(TM))

What's Inside A Flower?: And Other Questions About Science & Nature

My First Library : Boxset of 10 Board Books for Kids

Go, Dog Go (I Can Read It All By Myself, Beginner Books)

The Complete Cookbook For Young Chefs 100 Recipes, is it available on Amazon?

Yes! But at Pricepulse we inform you when is the lowest price to buy the The Complete Cookbook For Young Chefs 100 Recipes

Should I buy the The Complete Cookbook For Young Chefs 100 Recipes now?

This is a great price to buy! There's a 62% probability this price will be higher. Our advise is Buy it now.

What is the current price of The Complete Cookbook For Young Chefs 100 Recipes?

What was the lowest price for the The Complete Cookbook For Young Chefs 100 Recipes?