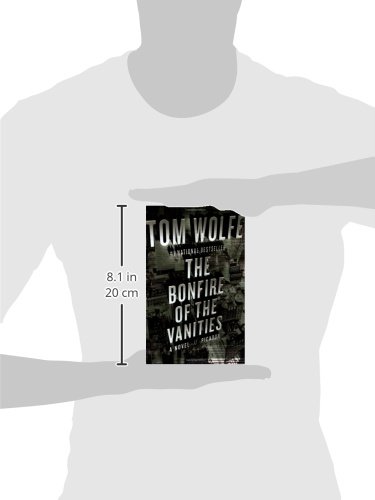 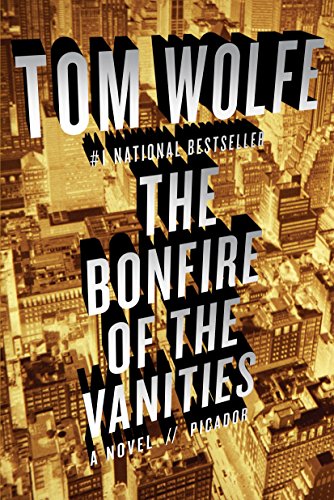 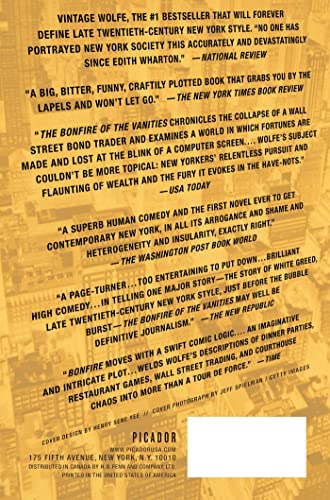 Product Description Vintage Tom Wolfe, The Bonfire of the Vanities, the #1 bestseller that will forever define late-twentieth-century New York style. "No one has portrayed New York Society this accurately and devastatingly since Edith Wharton" (The National Review)“A page-turner . . . Brilliant high comedy.” (The New Republic)Sherman McCoy, the central figure of Tom Wolfe's first novel, is a young investment banker with a fourteen-room apartment in Manhattan. When he is involved in a freak accident in the Bronx, prosecutors, politicians, the press, the police, the clergy, and assorted hustlers high and low close in on him, licking their chops and giving us a gargantuan helping of the human comedy, of New York in the 1980s, a city boiling over with racial and ethnic hostilities and burning with the itch to Grab It Now. Wolfe's novel is a big, panoramic story of the metropolis that reinforces the author's reputation as the foremost chronicler of the way we live in America. Review “A big, bitter, funny, craftily plotted book that grabs you by the lapels and won't let you go.” ―The New York Times Book Review“The Bonfire of the Vanities chronicles the collapse of a Wall Street bond trader, and examines a world in which fortunes are made and lost at the blink of a computer screen. . . . Wolfe's subject couldn't be more topical: New Yorkers' relentless pursuit and flaunting of wealth, and the fury it evokes in the have-nots.” ―USA Today“A superb human comedy and the first novel ever to get contemporary New York, in all its arrogance and shame and heterogeneity and insularity, exactly right.” ―The Washington Post Book World“A page-turner . . . Brilliant high comedy.” ―The New Republic“More than a tour de force.” ―Time From the Back Cover Tom Wolfe's modern American satire tells the story of Sherman McCoy, a Wall Street "Master of the Universe" who has it all -- a Park Avenue apartment, a job that brings wealth, power and prestige, a beautiful wife, an even more beautiful mistress. Suddenly, one wrong turn makes it all go wrong, and Sherman spirals downward in a sudden fall from grace that sucks him into the ravenous heart of a New York City gone mad during the go-go, racially turbulent, socially hilarious 1980s. About the Author Tom Wolfe (1930-2018) was one of the founders of the New Journalism movement and the author of such contemporary classics as The Electric Kool-Aid Acid Test, The Right Stuff, and Radical Chic & Mau-Mauing the Flak Catchers, as well as the novels The Bonfire of the Vanities, A Man in Full, and I Am Charlotte Simmons. As a reporter, he wrote articles for The Washington Post, the New York Herald Tribune, Esquire, and New York magazine, and is credited with coining the term, “The Me Decade.”Among his many honors, Tom was awarded the National Book Award, the John Dos Passos Award, the Washington Irving Medal for Literary Excellence, the National Humanities Medal, and National Book Foundation Medal for Distinguished Contribution to American Letters.A native of Richmond, Virginia, he earned his B.A. at Washington and Lee University, graduating cum laude, and a Ph.D. in American studies at Yale. He lived in New York City. Excerpt. © Reprinted by permission. All rights reserved. The Bonfire of the VanitiesA NovelBy Tom WolfePicadorCopyright © 2008 Tom WolfeAll right reserved.ISBN: 9780312427573Prologue: Mutt on Fire"And then say what? say, 'forget you're hungry, forget you got shot innaback by some racist cop-Chuck was here? Chuck come up toHarlem-'""No, I'll tell you what-""'Chuck come up to Harlem and-'"''I'll tell you what-""Say, 'Chuck come up to Harlem and gonna take care a business forthe black community'?"That does it.Heh-heggggggggggggggggghhhhhhhhhhhhhhh!It's one of those ungodly contralto cackles somewhere out there inthe audience. It's a sound from down so deep, from under so many lavishlayers, he knows exactly what she must look like. Two hundredpounds, if she's

Amazing
Great
Average
High
This is a great price to buy! There's a 76% probability this price will be higher. Our advice is Buy it now.
Buy on Amazon

The Bonfire Of The Vanities, is it available on Amazon?

Yes! But at Pricepulse we inform you when is the lowest price to buy the The Bonfire Of The Vanities

Should I buy the The Bonfire Of The Vanities now?

This is a great price to buy! There's a 76% probability this price will be higher. Our advice is Buy it now.

What is the current price of The Bonfire Of The Vanities?

What was the lowest price for the The Bonfire Of The Vanities?