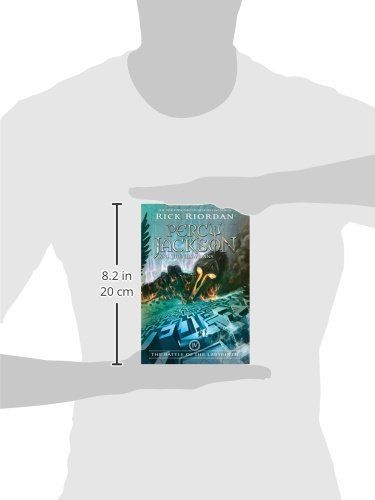 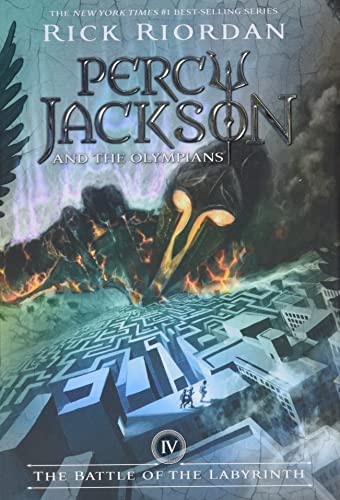 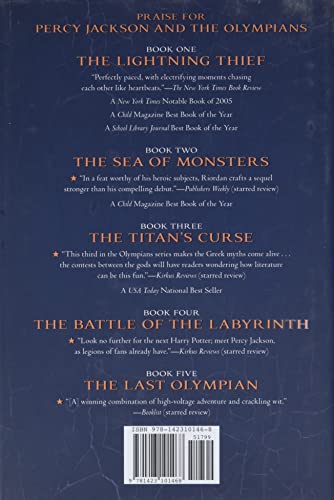 Product Description NOTE: Cover art may vary and cannot be selected. As an incoming freshman, Percy isn't expecting his high school orientation to be any fun. But when a mysterious mortal acquaintance appears, followed by demon cheerleaders, things quickly move from bad to worse. In this fourth installment of the blockbuster series, time is running out as war between the Olympians and the evil Titan lord Kronos draws near. Even the safe haven of Camp Half Blood grows more vulnerable by the minute as Kronos's army prepares to invade its once impenetrable borders. To stop them, Percy and his demigod friends will set out on a quest through the Labyrinth-a sprawling underground world with stunning surprises at every turn. Full of humor and heart-pounding action, this fourth book promises to be their most thrilling adventure yet. From School Library Journal Grade 5–9—The battle starts, literally, with an explosion and doesn't let up. After Percy destroys the high school band room battling monsters called empousai who have taken on the form of cheerleaders, he has to hide out at Camp Half-Blood. There, Grover's searcher's license is going to be revoked unless he can find the god Pan in seven days. An entrance to the Labyrinth has been discovered, which means that Luke, the half-blood turned bad, can bypass the magical protections and invade the camp. Annabeth insists that she must follow a quest to locate Daedalus's workshop before Luke does. Percy is disturbed by visions of Nico, the son of Hades, who is summoning forth the spirits of the dead with McDonalds Happy Meals. Percy, Grover, and Percy's Cyclops half-brother follow Annabeth into the maze not knowing if they will ever find their way out. Riordan cleverly personifies the Labyrinth as a sort of living organism that changes at will, and that traverses the whole of the United States. Kids will devour Riordan's subtle satire of their world, such as a Sphinx in the Labyrinth whose questions hilariously parody standardized testing. The secret of Pan is revealed with a bittersweet outcome that also sends an eco-friendly message. Like many series, the "Percy Jackson" books are beginning to show the strain of familiarity and repetition. However, the overarching story line remains compelling, and the cliff-hanger ending will leave readers breathless in anticipation of the fifth and final volume.—Tim Wadham, Maricopa County Library District, Phoenix, AZ Copyright © Reed Business Information, a division of Reed Elsevier Inc. All rights reserved. Review Percy Jackson, the half-blood son of Poseidon, enters the mythical Labyrinth with his friends Annabeth (daughter of Athena), Tyson (a Cyclops), and Grover (a satyr)-originally to help Grover locate the missing god Pan, but as their explorations continue, they uncover a plot by the evil Titan lord Kronos to invade Camp Half-Blood. The melding of Greek myths with modern-day settings remains fresh and funny in this fourth installment in the series, in which Percy seeks the help of the inventor Daedalus and battles monsters throughout the ever-shifting maze. Close loyalties among the foursome strain at times (Percy has started to grow into a chick magnet, a fact that upsets Annabeth) but never break as they defend their camp and draw nearer to the foreshadowed showdown against Kronos and the renegade half-blood Luke. Horn Book" Percy Jackson's fourth summer at Camp Half-Blood is much like his previous three-high-octane clashes with dark forces, laced with hip humor and drama. Opening with a line for the ages-"The last thing I wanted to do on my summer break was blow up another school"-this penultimate series installment finds Percy, Annabeth and the satyr Grover furiously working to prevent former camp counselor Luke from resurrecting the Titan lord Kronos, whose goal is to overthrow the gods. When the heroes learn that Luke can breach Camp Half-Blood's security through an exit from Daedalus's Labyrinth, they enter the maze in search

Amazing
Great
Average
High
This is absolutely the best time to buy. Don’t miss out, there's 93% probability of this price being higher soon. Buy now.
Buy on Amazon

The Battle Of The Labyrinth Percy Jackson And The, is it available on Amazon?

Yes! But at Pricepulse we inform you when is the lowest price to buy the The Battle Of The Labyrinth Percy Jackson And The

Should I buy the The Battle Of The Labyrinth Percy Jackson And The now?

What is the current price of The Battle Of The Labyrinth Percy Jackson And The?

What was the lowest price for the The Battle Of The Labyrinth Percy Jackson And The?