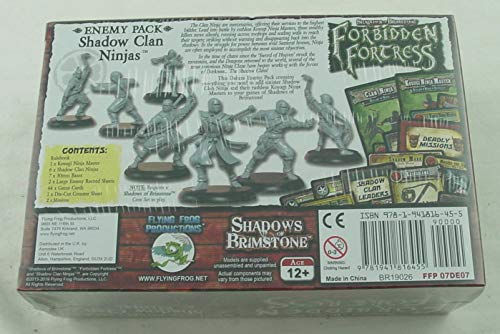 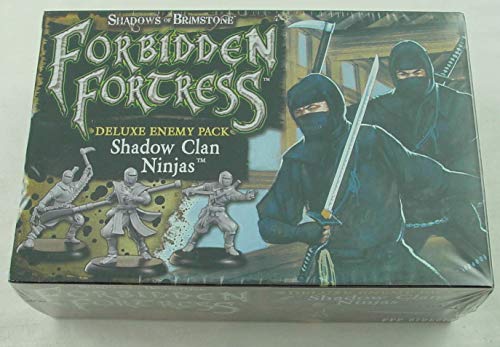 Kidnappers, thieves, and assassins, the Clan Ninja are mercenaries, offering their services to the highest bidder. Lead by a ruthless Kosugi Ninja Master, these stealthy killers move silently, running across rooftops and scaling walls to reach their targets; striking without warning and disappearing back into the shadows. In the struggle for power between rival Samurai houses, Ninja are often employed to accomplish the most sinister objectives. In the time of chaos since the meteor struck the mountain and the Demons came, several of the most notorious Ninja Clans have begun working with the forces of Darkness. These treacherous assassins have betrayed their own world for the promise of untold riches and power, while others have declared their own bid for domination, searching endlessly for mystical artifacts imbued with the power of the Void to fuel their ambitions. Includes 7 detailed plastic miniatures, 40+ game cards (including new decks) themed for the Clan Ninjas and their ruthless Master, as well as rules and 2 new missions!

Celebrity Who Is It Question and Answer Game

The Adventures of Robin Hood | A Kosmos Game | Family-Friendly, Cooperative, Role-Player, Story-Driven Game for 2 to 4 Players, Ages 10 and up

Shadows Of Brimstone Shadow Clan Ninja Deluxe Enem, is it available on Amazon?

Yes! But at Pricepulse we inform you when is the lowest price to buy the Shadows Of Brimstone Shadow Clan Ninja Deluxe Enem

Should I buy the Shadows Of Brimstone Shadow Clan Ninja Deluxe Enem now?

What is the current price of Shadows Of Brimstone Shadow Clan Ninja Deluxe Enem?

What was the lowest price for the Shadows Of Brimstone Shadow Clan Ninja Deluxe Enem?