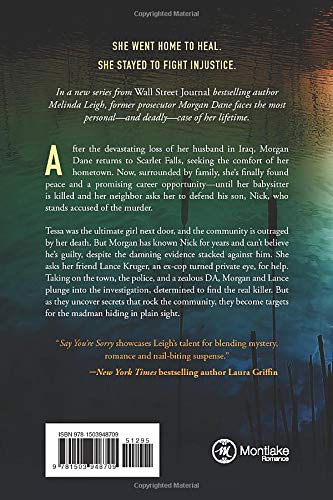 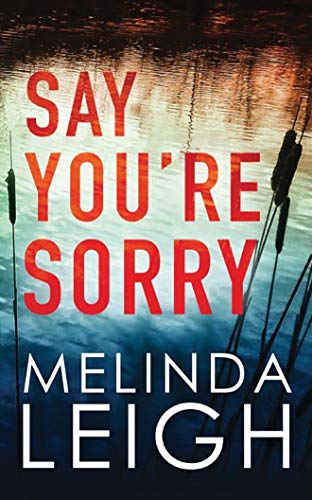 Review "Leigh masters every aspect of a thriller, and with every book sets the crime fiction bar higher." ―USA Today"Another winner from Melinda Leigh! Say You're Sorry showcases Leigh's talent for blending mystery, romance, and nail-biting suspense." ―Laura Griffin, New York Times bestselling author Product Description A #1 Amazon Charts bestseller and Prime Reading's most read book of 2018.In this multimillion-copy bestselling series from #1 Wall Street Journal bestselling author Melinda Leigh, former prosecutor Morgan Dane faces the most personal―and deadly―case of her lifetime.After the devastating loss of her husband in Iraq, Morgan Dane returns to Scarlet Falls, seeking the comfort of her hometown. Now, surrounded by family, she's finally found peace and a promising career opportunity―until her babysitter is killed and her neighbor asks her to defend his son, Nick, who stands accused of the murder.Tessa was the ultimate girl next door, and the community is outraged by her death. But Morgan has known Nick for years and can't believe he's guilty, despite the damning evidence stacked against him. She asks her friend Lance Kruger, an ex-cop turned private eye, for help. Taking on the town, the police, and a zealous DA, Morgan and Lance plunge into the investigation, determined to find the real killer. But as they uncover secrets that rock the community, they become targets for the madman hiding in plain sight. About the Author Wall Street Journal bestselling author Melinda Leigh is a fully recovered banker. A lifelong lover of books, she started writing as a way to preserve her sanity when her youngest child entered first grade. During the next few years, she joined Romance Writers of America, learned a few things about writing a novel, and decided the process was way more fun than analyzing financial statements. Melinda's debut novel, She Can Run, was nominated for Best First Novel by the International Thriller Writers. She's also earned three Daphne du Maurier Award nominations and a Golden Leaf Award. Her other novels include She Can Tell, She Can Scream, She Can Hide, She Can Kill, Midnight Exposure, Midnight Sacrifice, Midnight Betrayal, Midnight Obsession, Hour of Need, Minutes to Kill, and Seconds to Live. She holds a second-degree black belt in Kenpo karate; teaches women's self-defense; and lives in a messy house with her husband, two teenagers, a couple of dogs, and two rescue cats.

Say Youre Sorry Morgan Dane 1, is it available on Amazon?

Yes! But at Pricepulse we inform you when is the lowest price to buy the Say Youre Sorry Morgan Dane 1

Should I buy the Say Youre Sorry Morgan Dane 1 now?

What is the current price of Say Youre Sorry Morgan Dane 1?

What was the lowest price for the Say Youre Sorry Morgan Dane 1?