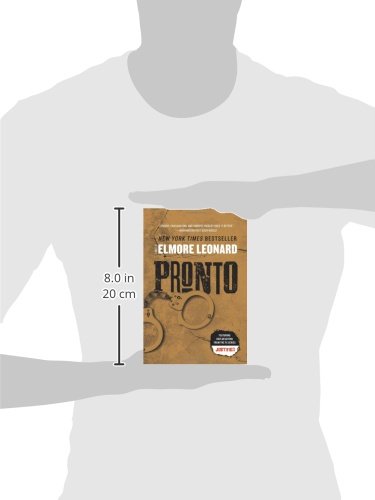 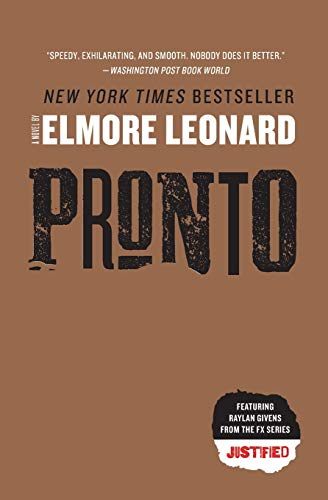 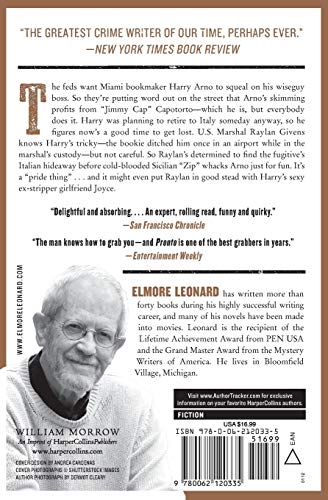 Product Description “Speedy, exhilarating, and smooth. Nobody does it better.” —Washington Post “The man knows how to grab you—and Pronto is one of the best grabbers in years.” —Entertainment Weekly Fans of U.S. Marshal Raylan Givens of the hit TV series Justified are in for a major treat. The unstoppable manhunter with the very itchy trigger finger stars in Pronto, a crime fiction gem from the one and only Elmore Leonard, “the greatest crime writer of our time, perhaps ever” (New York Times Book Review). The Grand Master justifies the overwhelming acclaim he has received over the course of his remarkable career with an electrifying thriller that sends the indomitable Raylan racing to Italy on the trail of a fugitive bookie who’s hiding from the vengeful Miami mob. The legendary Leonard, whom the Seattle Times lauds as the “King Daddy of crime writers,” proves that all comparisons to American noir icons John D. MacDonald, Dashiell Hammett, and James M. Cain are well deserved with this tale of very dirty doings and extremely dangerous men coming together in the birthplace of Puccini, Garibaldi, and La Cosa Nostra. From the Back Cover The feds want Miami bookmaker Harry Arno to squeal on his wiseguy boss. So they’re putting word out on the street that Arno’s skimming profits from “Jimmy Cap” Capotorto—which he is, but everybody does it. Harry was planning to retire to Italy someday anyway, so he figures now’s a good time to get lost. U.S. Marshal Raylan Givens knows Harry’s tricky—the bookie ditched him once in an airport while in the marshal’s custody—but not careful. So Raylan’s determined to find the fugitive’s Italian hideaway before cold-blooded Sicilian “Zip” whacks Arno just for fun. It’s a “pride thing” . . . and it might even put Raylan in good stead with Harry’s sexy ex-stripper girlfriend Joyce. About the Author Elmore Leonard wrote more than forty books during his long career, including the bestsellers Raylan, Tishomingo Blues, Be Cool, Get Shorty, and Rum Punch, as well as the acclaimed collection When the Women Come Out to Dance, which was a New York Times Notable Book. Many of his books have been made into movies, including Get Shorty and Out of Sight. The short story "Fire in the Hole," and three books, including Raylan, were the basis for the FX hit show Justified. Leonard received the Lifetime Achievement Award from PEN USA and the Grand Master Award from the Mystery Writers of America. He died in 2013.

Pronto A Novel, is it available on Amazon?

Yes! But at Pricepulse we inform you when is the lowest price to buy the Pronto A Novel

Should I buy the Pronto A Novel now?

What is the current price of Pronto A Novel?

What was the lowest price for the Pronto A Novel?