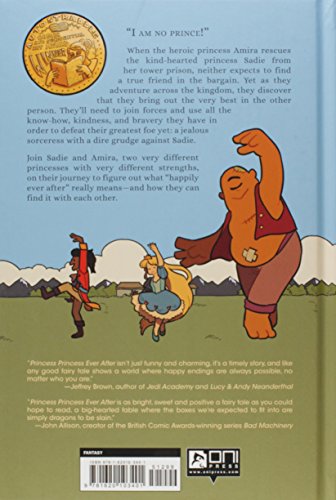 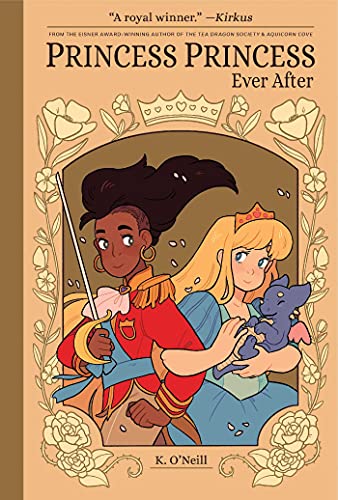 Product Description A sweet and positive fairy tale in which two princesses meet and embark on an adventure to overcome their own personal obstacles.  2014 Cybils Awards Finalist 2014 Autostraddle Comic Art Award for Favorite Graphic Novel 2017 ALA Rainbow Book List Top Ten 2018 Sakura Medal Nominee "It’s super cute, super queer, and feminist as all get out." –– BookRiot When the heroic princess Amira rescues the kind-hearted princess Sadie from her tower prison, neither expects to find a true friend in the bargain. Yet as they adventure across the kingdom, they discover that they bring out the very best in the other person. They’ll need to join forces and use all the know-how, kindness, and bravery they have in order to defeat their greatest foe yet: a jealous sorceress, who wants to get rid of Sadie once and for all. Join Sadie and Amira, two very different princesses with very different strengths, on their journey to figure out what “happily ever after” really means—and how they can find it with each other. Don't miss K. O'Neill's next queer fantasy, The Tea Dragon Society, in stores now! From School Library Journal Gr 3 Up—This fairy tale will leave readers smiling and believing in true love. Princess Amira, who is dark skinned and sports a Mohawk, doesn't want to be a princess and sets out to prove herself a capable warrior. Blonde-haired Princess Sadie is locked away in a tower. When Amira rescues Sadie, they embark on a life-changing journey filled with empowering messages about friendship, gender roles, identity, heroism, and the importance of staying true to oneself. The beautifully crafted, eye-catching illustrations of various characters, whether human or animal, are absolutely adorable. O'Neill's attention to detail, especially when it comes to characters' expressions, is strong. Kids will enjoy this quick, entertaining read and will especially love the romance between Amira and Sadie. VERDICT An excellent addition to graphic novel collections. Hand to fans of nontraditional fairy tales, such as Ursula Vernon's "Hamster Princess" series or Jeremy Whitley's "Princeless" books.—Jessica Bratt, Grand Rapids Public Library, MI Review "Combine a cuddly purple dragon, much sharing of cookies, abundant humor, and two distinct and appealing heroines, and you have a royal winner." ― Kirkus “[...] tells a story filled with sweetness and snark that should appeal to fans of all ages.” -- Lori Henderson ― School Library Journal "Meant for kids ages 9-12 but lovely at any age, Katie O’Neill’s Princess Princess Ever After is a lively graphic normal that eschews stereotypes about ‘damsels in distress’ while maintaining the whimsy of fairy tales." ― AfterEllen.com "Princess Princess Ever After is a wonderful story that’s great for any comics readers among you, as well as a great gift for any young comics readers in your life of any gender. If you’re looking for a quality story featuring LGBTQIA characters, consider picking this one up!” ― The Mary Sue " Princess Princess Ever After is as bright, sweet and positive a fairy tale as you could hope to read, a big-hearted fable where the boxes we're expected to fit into are simply dragons to be slain." -- John Allison, author of GIANT DAYS About the Author K. O'Neill is an Eisner and Harvey Award-winning illustrator and graphic novelist from New Zealand. They are the author of  Princess Princess Ever After,  Aquicorn Cove, The Tea Dragon series  and  Dewdrop, all from Oni Press. Their books reflect their interest in tea, creatures, things that grow, and the magic of everyday life.

Princess Princess Ever After, is it available on Amazon?

Yes! But at Pricepulse we inform you when is the lowest price to buy the Princess Princess Ever After

Should I buy the Princess Princess Ever After now?

What is the current price of Princess Princess Ever After?

What was the lowest price for the Princess Princess Ever After?