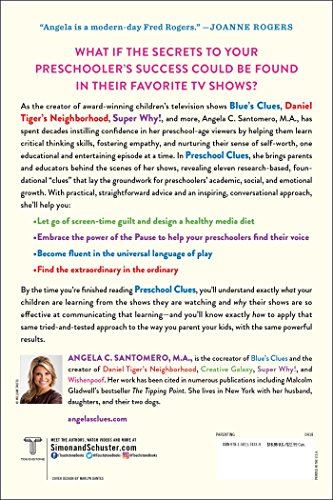 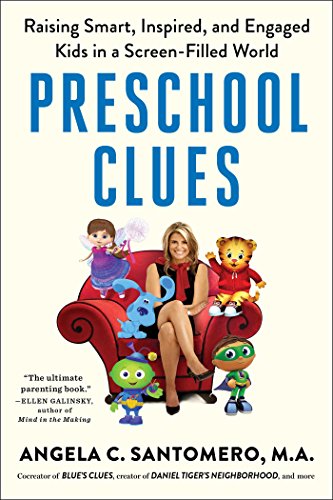 Product Description The award-winning creator of Blue’s Clues, Super Why!, and Daniel Tiger’s Neighborhood shares the secret sauce behind her shows’ powerful, transformative results in the form of eleven research-based, foundational “clues” to ensure that preschoolers flourish academically, socially, and emotionally during this critical time. The preschool years—when children are between the ages of two and five—are the most influential, important years in a child’s life. Studies show that pausing to interact, playing to solve problems, diffusing with humor, and using repetition are the hidden clues conscious parents use to raise successful kids and help them learn critical thinking skills, foster empathy, and nurture their sense of self-worth. Angela C. Santomero, MA, the award-winning creator of children’s television phenomena knows this better than anyone and has spent decades working to instill confidence in her young viewers. In Preschool Clues, she breaks down the philosophy behind her shows—educating, inspiring, and empowering kids—into concrete strategies that parents and educators can incorporate into their family and classroom to set their preschoolers up for success, such as: -Intentionally pausing to foster bonding, independence, and resilience -Developing empathy and confidence through soliciting preschoolers’ help -Becoming “fluent” in the language of preschoolers: Play -Igniting your preschooler’s curiosity -Being an involved co-player everyday -Designing a healthy media diet In Preschool Clues, Angela shares the latest research from top thinkers in child development and education. Through her practical, straightforward advice and inspiring, conversational approach, you will not only understand exactly what your children are learning from the shows they watch and why these shows are so effective, you’ll know exactly how to apply these same proven approaches in your daily life and with the same powerful results. From School Library Journal In Santomero's first book, the cocreator of award-winning programs such as Blue's Clues, and Daniel Tiger's Neighborhood shares the inspiration behind her educational, live-action, animated series, which incorporate both child development and early education principles. Admitting her major influence was Fred Rogers, Santomero gives readers "clues" to help preschoolers thrive academically, socially, and emotionally. She begins with the controversial question of whether screen time should be allowed for preschoolers and argues that, like the best children's media, parent time with kids should include play, thinking, learning to help others, and laughing, all elements she believes led to the hit success of her programs. Each chapter concludes with "Angela's Clues," a succinct section that provides suggestions for implementing the author's tips. VERDICT Fans of Blue's Clues and Santomero's other popular children's shows will enjoy her practical advice and conversational tone. Educators and parents will likely find a takeaway or two in this breezy, informative read.—Julia M. Reffner, Richmond, VA Review "Angela is carrying on Fred's legacy with her work in children's media -- like a modern day Fred Rogers." – Joanne Rogers “Angela Santomero is a bigger showrunner than Vince Gilligan, David Milch, and Judd Apatow combined — to a kid. The creator of  Blue Clues,  Super Why!,  Creative Galaxy — and yes,  Daniel Tiger’s Neighborhood — is the driving force behind the best educational programming for children.” –Fatherly.com “In this practical and research-based guide, Santomero,  Blue’s Clues cocreator and creator of  Daniel Tiger’s Neighborhood and other children’s TV shows, helps parents of preschoolers understand how to use media effectively and age appropriately… Parents will find plenty of fresh ideas for raising “smart, inspired, and engaged” preschoolers in this wise and enthusiastic text.”— Publishers Weekly "Leave it to the genius behind Blue’s Clues and Da

Amazing
Great
Average
High
It's not a good time to buy now, there's a 65% probability this price will decrease. Our advice is to Watch it.
Buy on Amazon

Preschool Clues Raising Smart Inspired And Engaged, is it available on Amazon?

Yes! But at Pricepulse we inform you when is the lowest price to buy the Preschool Clues Raising Smart Inspired And Engaged

Should I buy the Preschool Clues Raising Smart Inspired And Engaged now?

It's not a good time to buy now, there's a 65% probability this price will decrease. Our advice is to Watch it.

What is the current price of Preschool Clues Raising Smart Inspired And Engaged?

What was the lowest price for the Preschool Clues Raising Smart Inspired And Engaged?