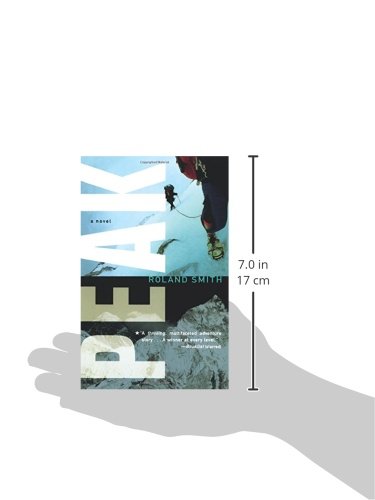 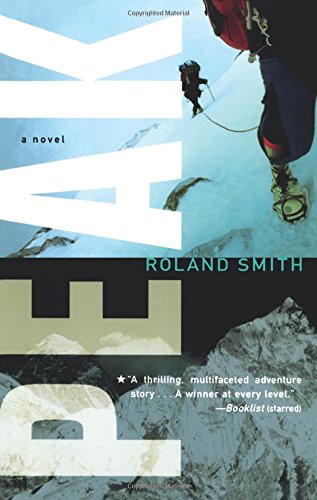 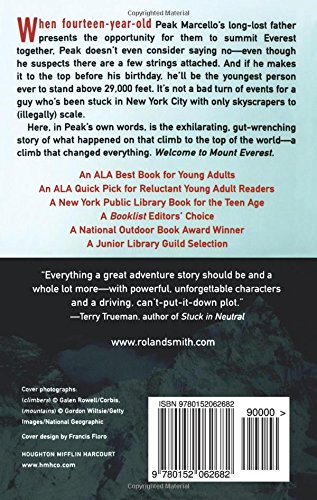 Product Description The only thing you’ll find on the summit of Mount Everest is a divine view. The things that really matter lie far below. – Peak Marcello After fourteen-year-old Peak Marcello is arrested for scaling a New York City skyscraper, he's left with two choices: wither away in Juvenile Detention or go live with his long-lost father, who runs a climbing company in Thailand. But Peak quickly learns that his father's renewed interest in him has strings attached. Big strings. As owner of Peak Expeditions, he wants his son to be the youngest person to reach the Everest summit--and his motives are selfish at best. Even so, for a climbing addict like Peak, tackling Everest is the challenge of a lifetime. But it's also one that could cost him his life. Roland Smith has created an action-packed adventure about friendship, sacrifice, family, and the drive to take on Everest, despite the incredible risk. The story of Peak’s dangerous ascent—told in his own words—is suspenseful, immediate, and impossible to put down. Review [set star] “A thrilling, multifaceted adventure story . . . A winner at every level.”— Booklist (starred) “A riveting read for reluctant and experienced readers alike.”— VOYA (5Q—highest rating) About the Author New York Times best-selling author Roland Smith is the author of 28 young adult novels including Peak, The Edge, Beneath, Above, Sasquatch, Elephant Run, Zach’s Lie, Shatterproof (39 Clues), the Cryptid Hunters series, the I,Q series, and the Storm Runner series. His novels have garnered dozens of state and national book awards. He speaks to over 50,000 children and adults every year at schools and conferences all over the world. He lives in Portland, Oregon. www.rolandsmith.com.