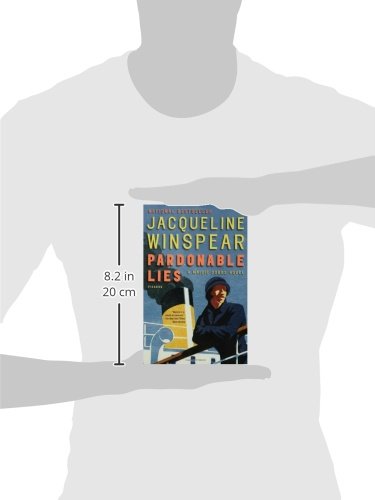 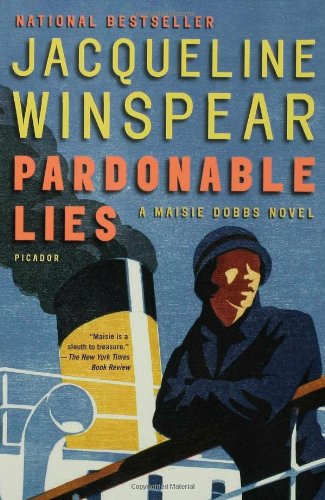 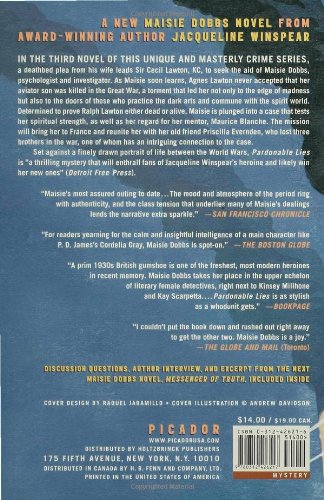 Product Description In the third novel of this bestselling series, London investigator Maisie Dobbs faces grave danger as she returns to the site of her most painful WWI memories to resolve the mystery of a pilot's death.A deathbed plea from his wife leads Sir Cecil Lawton to seek the aid of Maisie Dobbs, psychologist and investigator. As Maisie soon learns, Agnes Lawton never accepted that her aviator son was killed in the Great War, a torment that led her not only to the edge of madness but to the doors of those who practice the dark arts and commune with the spirit world. In accepting the assignment, Maisie finds her spiritual strength tested, as well as her regard for her mentor, Maurice Blanche. The mission also brings her together once again with her college friend Priscilla Evernden, who served in France and who lost three brothers to the war―one of whom, it turns out, had an intriguing connection to the missing Ralph Lawton.Following on the heels of Jacqueline Winspear's triumphant Birds of a Feather, PARDONABLE LIES is the most compelling installment yet in the chronicles of Maisie Dobbs, "a heroine to cherish" (Marilyn Stasio, The New York Times Book Review). Review “In Maisie Dobbs, Jacqueline Winspear has given us a real gift. Maisie Dobbs has not been created--she has been discovered. Such people are always there amongst us, waiting for somebody like Ms. Winspear to come along and reveal them. And what a revelation it is!” ―Alexander McCall Smith, author of The No. 1 Ladies' Detective Agency series“Maisie is a sleuth to treasure.” ―The New York Times Book Review“Maisie's most assured outing to date . . . The mood and atmosphere of the period ring with authenticity, and the class tension that underlies many of Maisie's dealings lends the narrative extra sparkle.” ―San Francisco Chronicle“For readers yearning for the calm and insightful intelligence of a main character like P. D. James's Cordelia Gray, Maisie Dobbs is spot-on.” ―The Boston Globe“A prim 1930s British gumshoe is one of the freshest, most modern heroines in recent memory. Maisie Dobbs takes her place in the upper echelon of literary female detectives, right next to Kinsey Millhone and Kay Scarpetta. . . . Pardonable Lies is as stylish as a whodunit gets.” ―BookPage“I couldn't put the book down and rushed out right away to get the other two. Maisie Dobbs is a joy.” ―The Globe and Mail (Toronto)“Will thoroughly delight existing fans and should garner her new ones . . . Winspear carefully crafts each sentence, building toward a thrilling and emotional conclusion.” ―Library Journal“If you haven't read the Maisie Dobbs stories, you are missing a treat.” ―The Ledger Independent (Kentucky)“Fans of Miss Marple and Precious Ramotswe are sure to embrace Maisie, a pitch-perfect blend of compassion and panache.” ―Booklist“To give an idea of how much I liked Pardonable Lies, I immediately went to my local bookstore and ordered the first two in the series. Long live Maisie Dobbs!” ―Mystery News“Maisie is immediately captivating. . . . Dobbs ponders the mysteries of life as well as the mysteries she is hired to solve. . . . Surprisingly eloquent, evening moving.” ―Saint Paul Pioneer Press“Jacqueline Winspear's historical mysteries prove exactly what this subgenre can achieve, offering a prism of the past and a mirror of the future. . . . Fascinating.” ―Sun-Sentinel“A fine examination of a young woman making her way amid the economic and social dislocations of 1930s Britain . . . Pardonable Lies is a reflection, a meditation even, on how those of us who have experienced war carry with us the scars that can reopen in an instant.” ―The Sunday Patriot-News“Winspear again treats us to a story broad in scope and rich in detail and suspense. . . . An excellent series.” ―The Orange County Register“Filled with convincing characters, this is a complex tale of healing, of truth and half-truth, of long-held secrets, some, perhaps, to be held forever. Winspear writes seamle

Yes! But at Pricepulse we inform you when is the lowest price to buy the Pardonable Lies A Maisie Dobbs Novel Maisie Dobbs