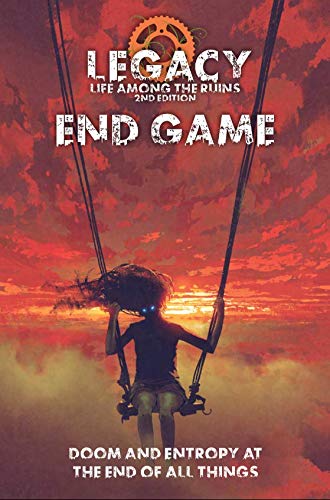 Legacy: End Game expands on the core game, providing a range of ways to increase the drama and peril of your post-apocalyptic wasteland and fight against a final end. This book greatly expands Legacy s ability to tell stories of desperate survival in the ruins of the future. Rules for building greater horrors in world creation and adding a doom clock help a GM add a greater sense of peril to the game, while the Traitor role and tweaked Treaty rules encourage players to turn on other factions - and even betray their own. Wonders like the Tartarus Site and the Race to the Stars give players an opportunity to escape insurmountable threats - if they can trust each other. It also includes faction and character options that push play in a perilous, tense direction: the Deathless Elite wring the wasteland dry to maintain their immortality, the Eldritch Servants conduct dark rites to appease their alien gods, and the Road Warrior leaves a trail of destruction behind them as they try to outrun their past. There are 13 new playbooks to pick from, each impacting the world the group creates and the story they tell together. Finally, the book includes GM assistance: essays on Isolation, Tragedy, Creative Playing and Strategy from guest authors, and a quickstart adventure of high-octane action and danger on a monster-haunted moon.

Amazing
Great
Average
High
It's not a good time to buy now, there's a 39% probability this price will decrease. Our advice is to Watch it.
Buy on Amazon

Hasbro Gaming Mouse Trap Board Game for Kids Ages 6 and Up, Classic Kids Game for 2-4 Players, with Easier Set-Up Than Previous Versions

Masters of the Universe Origins He-Man Action Figure, Battle Character for Storytelling Play and Display, Gift for 6 to 10 Year Olds and Adult Collectors

Star Wars The Vintage Collection The Child with Pram Toy, 3.75-inch-Scale The Mandalorian Action Figure, Toys for Kids Ages 4 and Up, Multicolored (F1900)

The Elf on the Shelf: A Christmas Tradition

Yes! But at Pricepulse we inform you when is the lowest price to buy the Legacy End Game Muh051697

It's not a good time to buy now, there's a 39% probability this price will decrease. Our advice is to Watch it.

What is the current price of Legacy End Game Muh051697?

What was the lowest price for the Legacy End Game Muh051697?