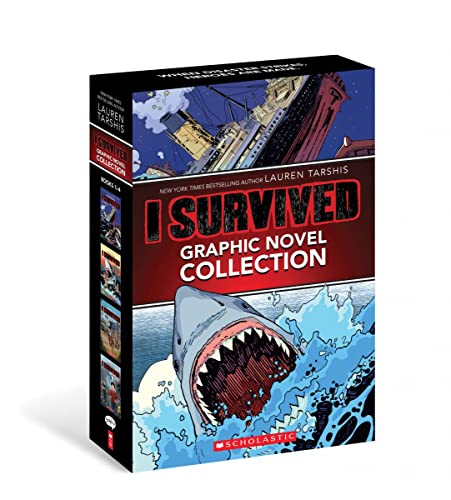 Product Description Lauren Tarshis's New York Times bestselling I Survived series takes on vivid life in this box set of four paperback graphic novel editions. With text adapted by Georgia Ball and art by Haus Studio, Álvaro Sarraseca, and Corey Egbert, these graphic novels combine historical facts with high-action storytelling that's sure to keep any reader turning the pages. Each book includes a nonfiction section at the back with facts and photos about the real-life event. The set is perfect for I Survived fans as well as any reader interested in stories of disaster and survival, or who wants an action-packed experience of the events that have shaped history. This set includes: I Survived the Sinking of the Titanic, 1912 (I Survived Graphic Novel #1): George Calder must be the luckiest kid alive he and his little sister, Phoebe, are sailing with their aunt on the Titanic, the greatest ship ever built! But one night while George is off exploring, a terrible boom shakes the entire boat. George has always gotten out of trouble before. Can he survive this nightmare? I Survived the Shark Attacks of 1916 (I Survived Graphic Novel #2): Chet Roscow is finally feeling at home in his uncle's little New Jersey town. He has three new friends, and they love cooling off in the creek on hot summer days. One afternoon, Chet spots a gray fin in the creek, but it must be his imagination It's impossible he's about to come face-to-face with a killer shark... right? I Survived the Nazi Invasion, 1944 (I Survived Graphic Novel #3): It's been years since the Nazis invaded Max Rosen's home country of Poland. All the Jewish people, including Max's fam­ily, have been forced to live in a ghetto. One day, Max and his sister, Zena, make a dar­ing escape into the nearby forest, where they are rescued by Jewish resistance fighters. But soon, grenades are falling all around them. Can Max and Zena survive the fallout of the Nazi invasion? I Survived the Attacks of September 11, 2001 (I Survived Graphic Novel #4): Hoping to get some advice from his firefighter uncle, eleven-year-old Lucas skips school one beautiful September morning and takes the train into Manhattan. But just as Lucas arrives at his the firehouse, everything changes and nothing will ever be the same again. Review Praise for I Survived Graphic Novels #1-4: A Graphix Collection: "Kids ages 7-13 who enjoy graphic novels and historical fiction are likely to be glad for a boxed set from Lauren Tarshis’s ‘I Survived’ series … The books are packed with risk, danger and the heroism of young characters caught up in terrible events: Just the thing for a bit of cozy holiday reading." -- The Wall Street Journal "Eight-year-olds should read a mix of fiction and nonfiction. These graphic novel adaptations of Lauren Tarshis' popular ‘I Survived’ series put kids in the middle of historical events, including the sinking of the Titanic and 9/11." -- Today.com Praise for I Survived the Sinking of the Titanic, 1912 (I Survived Graphic Novel #1): "The first installment of Tarshis' sprawling prose disaster oeuvre for young readers is reimagined in visually interesting full-color comic panels that support its recognizable thrilling pace and convenient twists. Many of the most exciting scenes are largely wordless, spotlighting the propulsive action amid growing tensions. A fresh and interesting adaptation, making for an easy crowd pleaser." -- Kirkus Reviews "The original I Survived series already has lots of appeal for emerging readers, but this graphic adaptation of Tarshis' novel not only stays incredibly true to the original story but now provides another format in which to enjoy this high-interest and easily accessible piece of historical fiction. The illustrations nicely complement the plot-driven tone and softly show the historical horror appropriately for a young audience without minimalizing its tragedy... Readers will be poring over the pages to see what happens next, even

Amazing
Great
Average
High
This is absolutely the best time to buy. Don’t miss out, there's 80% probability of this price being higher soon. Buy now.
Buy on Amazon

Freddie The Farting Snowman: A Funny Read Aloud Picture Book For Kids And Adults About Snowmen Farts and Toots (Fart Dictionaries and Toot Along Stories)

Freddie The Farting Snowman: A Funny Read Aloud Picture Book For Kids And Adults About Snowmen Farts and Toots (Fart Dictionaries and Toot Along Stories)

I Survived Graphic Novels 1 4 A Graphix Collection, is it available on Amazon?

Yes! But at Pricepulse we inform you when is the lowest price to buy the I Survived Graphic Novels 1 4 A Graphix Collection

Should I buy the I Survived Graphic Novels 1 4 A Graphix Collection now?

What is the current price of I Survived Graphic Novels 1 4 A Graphix Collection?

What was the lowest price for the I Survived Graphic Novels 1 4 A Graphix Collection?