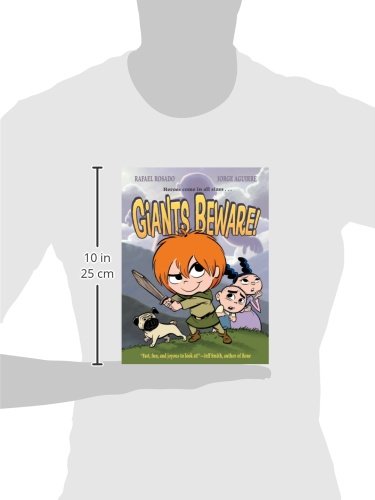 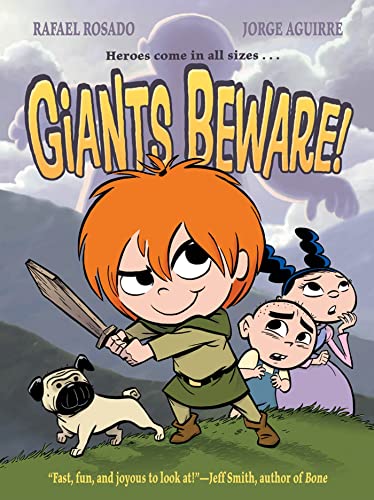 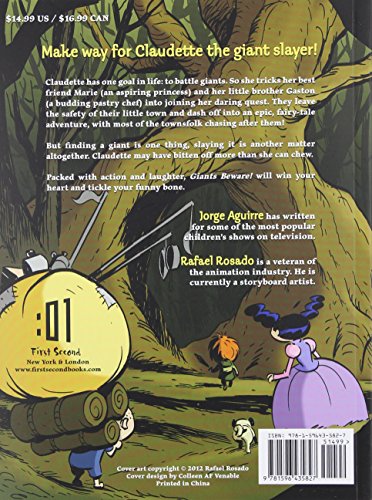 About the Author Jorge Aguirre is a Colombian-American from Columbus, Ohio. He’s written for everything from the most popular children’s shows to documentaries about Romanian exorcisms. He is the author of Giants Beware! He lives on the East Coast. Born in Puerto Rico and based in Columbus, Ohio, Rafael Rosado is a seasoned writer, director and storyboard artist for the animation industry. He began his career at Character Builders in Columbus, Ohio as an assistant animator. He quickly worked his way up to become a character designer, storyboard artist and commercial director. During his tenure there he worked on such shows as Fox's Emmy Award-winning Life With Louie, HBO's Happily Ever After and Fox's Where in The World Is Carmen San Diego. After leaving Character Builders in 1994, Rafael went to work for Warner Brothers Animation, storyboarding on Pinky and The Brain and Emmy nominated Animaniacs, for which he also wrote two episodes. He was the recruited by the newly-founded Sony Television Animation division, where he worked on eleven shows including directing episodes of CBS's Project GeeKeR and NBC's Sammy. He was promoted to Supervising Director on Extreme Ghostbusters and Producer on Men In Black: The Animated Series. After 5 years honing his skills in Los Angeles, Rafael moved back to Ohio to raise his family. He is now one of the most highly sought-after storyboard artists, working for major studios such as Warner Brothers, The Walt Disney Company, Sony, Universal and the Cartoon Network. Highly diverse, he has storyboarded on action, comedy and pre-school shows, shows as diverse as Boondocks, Teenage Mutant Ninja Turtles, The Batman, The Venture Brothers and Curious George. Rafael's first graphic novel, Giants Beware!, was published by First Second Books in early 2012. His short film The Tortured Clown was acquired by and featured on the Sundance Channel. Product Description Make way for Claudette the giant slayer in this delightful, fantastical adventure! Claudette's fondest wish is to slay a giant. But her village is so safe and quiet! What's a future giant slayer to do? With her best friend Marie (an aspiring princess), and her brother Gaston (a pastry-chef-to-be), Claudette embarks on a super-secret quest to find a giant―without parental permission. Can they find and defeat the giant before their parents find them and drag them back home? Giants Beware! offers up a wondrous, self-contained world in the tradition of the very best of Pixar. Claudette and her friends will have you laughing out loud from page one. From School Library Journal Gr 2-6-Rambunctious Claudette, the daughter of the town blacksmith, sets off to kill the local giant with her best friend and brother in tow. Action and friendship, drawn in a clear, cheerful style, make this graphic novel a great choice for "Bone" (Scholastic) fans.α(c) Copyright 2013. Library Journals LLC, a wholly owned subsidiary of Media Source, Inc. No redistribution permitted. Review Praise for The Chronicles of Claudette series: "These stylish books ― there are three so far ― are called “Giants Beware!,” “Monsters Beware!” and “Dragons Beware!,” and they are just the thing for kids who like fractured fairy tales."―New York Times Praise for Giants Beware!: "The story, with its riffs on fairy tales and quest narratives, offers just the right balance of familiarity and originality, with plenty of humorous asides."―The New York Times "Comedy and fairy tale sensibilities balance perfectly in this exciting debut by writer Aguirre and illustrator Rosado."―Publishers Weekly, starred review "This is one book that readers are sure to enjoy again and again."―Children's Literature "The story strikes a fine balance between beingaction-and friendship-driven. The art is similarly well-balanced: Rosado’s inkdrawings are strong and lively, with expressive characters and well-drawnlandscapes."―School Library Journal, starred review "This winning graphic novel will ins

Giants Beware The Chronicles Of Claudette, is it available on Amazon?

Yes! But at Pricepulse we inform you when is the lowest price to buy the Giants Beware The Chronicles Of Claudette

Should I buy the Giants Beware The Chronicles Of Claudette now?

What is the current price of Giants Beware The Chronicles Of Claudette?

What was the lowest price for the Giants Beware The Chronicles Of Claudette?