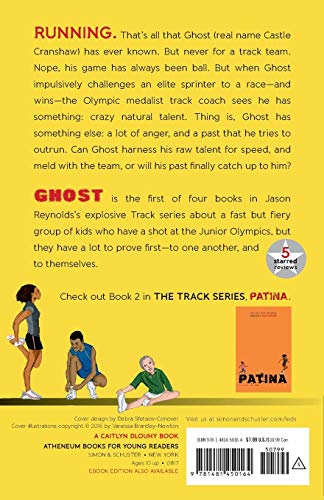 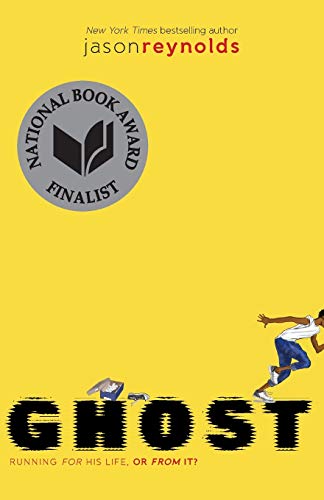 Product Description A National Book Award Finalist for Young People’s Literature. Nominated as one of America’s best-loved novels by PBS’s The Great American Read. Ghost wants to be the fastest sprinter on his elite middle school track team, but his past is slowing him down in this first electrifying novel of a brand-new series from Coretta Scott King/John Steptoe Award–winning author Jason Reynolds. Ghost. Lu. Patina. Sunny. Four kids from wildly different backgrounds with personalities that are explosive when they clash. But they are also four kids chosen for an elite middle school track team—a team that could qualify them for the Junior Olympics if they can get their acts together. They all have a lot to lose, but they also have a lot to prove, not only to each other, but to themselves. Running. That’s all Ghost (real name Castle Cranshaw) has ever known. But Ghost has been running for the wrong reasons—it all started with running away from his father, who, when Ghost was a very little boy, chased him and his mother through their apartment, then down the street, with a loaded gun, aiming to kill. Since then, Ghost has been the one causing problems—and running away from them—until he meets Coach, an ex-Olympic Medalist who sees something in Ghost: crazy natural talent. If Ghost can stay on track, literally and figuratively, he could be the best sprinter in the city. Can Ghost harness his raw talent for speed, or will his past finally catch up to him? About the Author Jason Reynolds is a #1  New York Times bestselling author, a Newbery Award Honoree, a Printz Award Honoree, a two-time National Book Award finalist, a Kirkus Award winner, a two-time Walter Dean Myers Award winner, an NAACP Image Award Winner, and the recipient of multiple Coretta Scott King honors. Reynolds is also the 2020–2021 National Ambassador for Young People’s Literature. His many books include  When I Was the Greatest, The Boy in the Black Suit, All American Boys (cowritten with Brendan Kiely),  As Brave as You, For Every One, the Track series ( Ghost, Patina, Sunny, and Lu),  Look Both Ways, and  Long Way Down, which received a Newbery Honor, a Printz Honor, and a Coretta Scott King Honor. He lives in Washington, DC. You can find his ramblings at JasonWritesBooks.com. Excerpt. © Reprinted by permission. All rights reserved. Ghost 1 WORLD RECORDS CHECK THIS OUT. This dude named Andrew Dahl holds the world record for blowing up the most balloons . . . with his nose. Yeah. That’s true. Not sure how he found out that was some kinda special talent, and I can’t even imagine how much snot be in those balloons, but hey, it’s a thing and Andrew’s the best at it. There’s also this lady named Charlotte Lee who holds the record for owning the most rubber ducks. No lie. Here’s what’s weird about that: Why would you even want one rubber duck, let alone 5,631? I mean, come on. And me, well, I probably hold the world record for knowing about the most world records. That, and for eating the most sunflower seeds. “Let me guess, sunflower seeds,” Mr. Charles practically shouts from behind the counter of what he calls his “country store,” even though we live in a city. Mr. Charles, who, by the way, looks just like James Brown if James Brown were white, has been ringing me up for sunflower seeds five days a week for about, let me think . . . since the fourth grade, which is when Ma took the hospital job. So for about three years now. He’s also hard of hearing, which when my mom used to say this, I always thought she was saying “harder hearing,” which made no sense at all to me. I don’t know why she just didn’t say “almost deaf.” Maybe because “hard of hearing” is more like hospital talk, which was probably rubbing off on her. But, yeah, Mr. Charles can barely hear a thing, which is why he’s always yelling at everybody and everybody’s always yelling at him. His store is a straight-up scream fest, not to mention the extra sound effects from the loud TV

Current price$5.99
Since 2 months
Average price$6.53
Based on 3 years
Lowest price ever$3.19
2 months ago
Highest price ever$7.99
17 months ago
Amazing
Great
Average
High
This is a great price to buy! There's a 70% probability this price will be higher. Our advise is Buy it now.
Buy on Amazon

Ghost 1 Track, is it available on Amazon?

Yes! But at Pricepulse we inform you when is the lowest price to buy the Ghost 1 Track

Should I buy the Ghost 1 Track now?

What is the current price of Ghost 1 Track?

What was the lowest price for the Ghost 1 Track?

The lowest historical price was $3.19