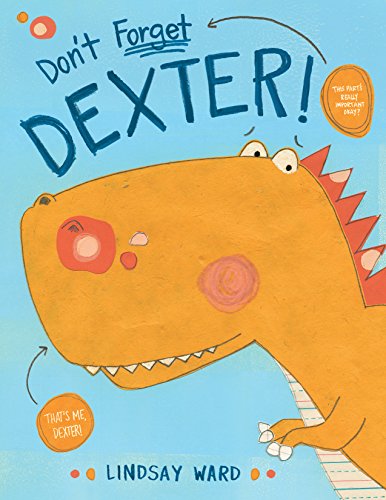 Product Description Introducing Dexter T. Rexter, the toughest, coolest dinosaur ever. At least he likes to think so.When his best friend, Jack, leaves him behind at the doctor’s office, Dexter T. Rexter panics. First he tries to find Jack. Then he sings their special song. Then he sings their special song even louder. But when Jack still doesn’t appear, Dexter starts to wonder. What if he’s being replaced by another toy? It can’t be―after all, he can STOMP, RAWR, and CHOMP! Right? Right?!This hilariously neurotic dinosaur will do whatever it takes to get his friend back―even asking the reader’s advice―in this first book of a brand-new series. From School Library Journal PreS-Gr 1—Ah, the plight of the well-loved but forgotten toy. For parents, the accidentally forgotten favorite toy brings on a feeling of near terror as well as hysterics from their child. The toy owners experience extreme distress and tears. But what about the forgotten toy? In this story, a cuddly looking T-Rex (Dexter T. Rexter) that has been left behind in the waiting room of a doctor's office speaks directly to readers about his longing for his best friend, a young black boy named Jack. Children are pulled into Dexter's story, from the emotional high when he recites the rhyming battle cry Jack created especially for him, "Dexter Dino,/Stomp through/the swamp./Dexter Dino,/Chomp, Chomp,/Chomp!" to the low when he thinks that he might have been left behind on purpose because he is not as cool as a motorized car or truck. The dino's escape attempts are numerous and amusing, and his eventual reunion with Jack is sweet. The childlike illustrations are primarily orange and yellow and perfectly convey Dexter's ever-changing moods. VERDICT Sure to be loved by young children who value toys over their parent's cell phones.—Sally James, South Hillsborough Elementary School, CA Review “Ward’s ink, colored-pencil, and cut-paper illustrations give readers a toy’s view of the world and allow children to stomp in Dexter’s feet for a while, his facial expressions giving them lots of clues to his feelings. Readers will be reminded of both Knuffle Bunny and Scaredy Squirrel, but Dexter is a character all his own. Lost and found was never so riotously funny or emotionally draining.” —Kirkus Reviews (starred review)“Ward (Brobarians) is as funny as ever as she chronicles her orange hero’s nervous, no-filter state of mind, and her cut-paper, pencil, and ink drawings—with their visual asides, annotations, and shifts in scale—are irrepressible. It’s high anxiety made highly adorable.” —Publishers Weekly“The dino’s escape attempts are numerous and amusing, and his eventual reunion with Jack is sweet. The childlike illustrations are primarily orange and yellow and perfectly convey Dexter’s ever-changing moods…Sure to be loved by young children who value toys over their parent’s cell phones.” —School Library Journal“What child can resist the roar of a dinosaur who needs help? The opportunity to be bigger, braver, and fiercer, than T-rex is irresistible, and in Lindsay Ward’s hilarious direct-address friendship story, it’s irresistible fun…There will be plenty of giggles when Dexter draws his stick-figure portrait, rappels into the fish tank, and melts into a puddle of dinosaur tears. A spirited reading (and singing) will bring the story fully to life.” —Celebrate Picture Books“Oh. My. Gosh! This book could not be more adorable!” —Late Bloomer’s Blog“No dinosaur story time will be complete without Don’t Forget Dexter!…Children will easily connect with the feeling of being alone or will recall those times when they have forgotten friends. Get ready to read it with emotion and humor in your voice and expect requests for it to be read again.” —Librarian’s Quest“Wonderfully cute…A great mix of fun and feeling.” —The Baby Bookworm“This bright colorful book with its large readable text makes for a delightful read-aloud. Losing a toy is a common childhood experienc

Amazing
Great
Average
High
It's not a good time to buy now, there's a 85% probability this price will decrease. Our advice is to Watch it.
Buy on Amazon

Have You Seen My Dinosaur? (Beginner Books(R))

Have You Seen My Dinosaur? (Beginner Books(R))

Yes! But at Pricepulse we inform you when is the lowest price to buy the Dont Forget Dexter Dexter T Rexter

It's not a good time to buy now, there's a 85% probability this price will decrease. Our advice is to Watch it.

What is the current price of Dont Forget Dexter Dexter T Rexter?

What was the lowest price for the Dont Forget Dexter Dexter T Rexter?