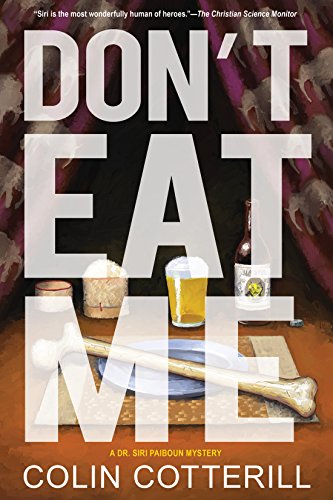 Product Description Between getting into a tangle with a corrupt local judge, and discovering a disturbing black-market business, Dr. Siri and Inspector Phosy have their hands full in the thirteenth installment of Colin Cotterill's quirky, critically acclaimed series. Dr. Siri Paiboun, the 75-year-old ex-national coroner of Laos, may have more experience dissecting bodies than making art, but now that he’s managed to smuggle a fancy movie camera into the country, he devises a plan to shoot a Lao adaptation of War and Peace with his friend Civilai. The only problem? The Ministry of Culture must approve the script before they can get rolling. That, and they can’t figure out how to turn on the camera. Meanwhile, the skeleton of a woman has appeared under the Anusawari Arch in the middle of the night. Siri puts his directorial debut on hold and assists his friend Phosy, the newly promoted Senior Police Inspector, with the ensuing investigation. Though the death of the unknown woman seems to be recent, the flesh on her corpse has been picked off in places as if something—or someone—has been gnawing on the bones. The plot Siri and his friends uncover involves much more than a single set of skeletal remains. Review Praise for Don't Eat Me"This is one of the best Dr. Siri's yet." —The Globe and Mail "Delightful." —The Seattle Times "Fans of Alexander McCall Smith and Boris Akunin will enjoy this gently ironic series. Definitely recommended for its inclusive characters, humor, and a thought-provoking ending." —Library Journal, Starred Review "Expands the boundaries of mystery fiction into a heady brew of Communist-oppressive noir and magical realism." —Booklist, Starred Review "Excellent . . . The eccentric Siri continues to stand out as a unique and endearing series sleuth." —Publishers Weekly, Starred Review "Grisly and hilarious in equal measure." —BookPage, Top Pick "Written at times with tongue-in-cheek, but always with sureness." —Crimespree Magazine "Cotterill's long-running series, now on its 13th installment, runs on the chemistry of his quirky comic characters, who once again deliver delightfully. Tart chapter titles like 'Enough Perverts to Keep Us All Busy' add another layer of ironic humor." —Kirkus Reviews "Cotterill writes effortlessly, with an excellent sense of timing and a constant undercurrent of humor."  —New York Journal of Books  "Cotterill combines serious issues with a charming and frequently amusing tale." —Crime Review UK "The characters are lovable, exasperating, noble, and above all hilarious . . . The grand finale is satisfying and glorious. Highly recommended." —Over My Dead Body "Cotterill knows his characters inside and out." —Reviewing the Evidence "Colin Cotterill's Dr. Siri books are always a delight.  Don't Eat Me may be one of the most memorable in the series. And it's almost sure to send you back to the earlier titles, whether for the first time or the third (or more)." —Kingdom Books "Great writing, smooth style, writing that keeps a smile on your lips, and even a very tense period towards the end of the book where he keeps you in a suspense." —Bookgasm Praise for the Dr. Siri mysteries   “Hilarious.”  —The New York Times Book Review "[Siri] is the most wonderfully human of heroes." —The Christian Science Monitor “Cotterill has a gift for tempering bad stuff—specifically, the baffling and chaotic political climate of communism circa 1980—with gently ironic humor and frequent doses of slightly kooky occultism. His books are thus a welcome balm for our own current baffling and chaotic political climate.”  —The Seattle Times  “The book ends with a rat-catching competition that is as bizarre as Dr. Siri’s wacky sense of humor. This is a unique series.”  —Dayton Daily News  “The Dr. Siri books are by turns laugh-out-loud funny, sobering, convoluted, historical and endlessly entertaining . . . This series will have you reading (and laughing) well after most

Dont Eat Me A Dr Siri Paiboun Mystery, is it available on Amazon?

Yes! But at Pricepulse we inform you when is the lowest price to buy the Dont Eat Me A Dr Siri Paiboun Mystery

Should I buy the Dont Eat Me A Dr Siri Paiboun Mystery now?

What is the current price of Dont Eat Me A Dr Siri Paiboun Mystery?

What was the lowest price for the Dont Eat Me A Dr Siri Paiboun Mystery?