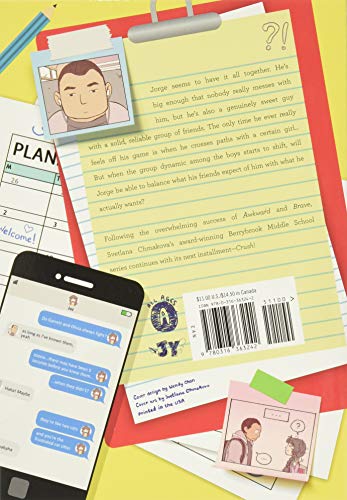 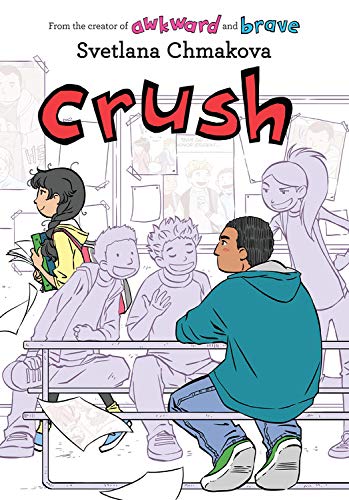 Product Description Following the overwhelming success of AWKWARD and BRAVE, Svetlana Chmakova's award winning Berrybrook Middle School series continues with its next installment - CRUSH! Jorge seems to have it all together. He's big enough that nobody really messes with him, but he's also a genuinely sweet guy with a solid, reliable group of friends. The only time he ever really feels off his game is when he crosses paths with a certain girl... But when the group dynamic among the boys starts to shift, will Jorge be able to balance what his friends expect of him versus what he actually wants? About the Author Svetlana Chmakova was born and raised in Russia until the age of 16, when her family emigrated to Canada. She quickly made a name for herself with works like Dramacon, Nightschool, the manga adaptation of James Patterson's Witch & Wizard, and the webcomic Chasing Rainbows. She graduated from Sheridan College with a three-year Classical Animation Diploma. Her latest work for middle grade readers, Awkward, has been a runaway critical success and was named one of YALSA's 2016 Top Ten Great Graphic Novels for Teens!

Current price$8.01
Since 48 days
Average price$9.14
Based on 2 years
Lowest price ever$2.33
52 days ago
Highest price ever$11.00
2 years ago
Amazing
Great
Average
High
This is a great price to buy! There's a 66% probability this price will be higher. Our advise is Buy it now.
Buy on Amazon

Mike Mulligan and His Steam Shovel

When I Pray for You

Crush Berrybrook Middle School 3, is it available on Amazon?

Yes! But at Pricepulse we inform you when is the lowest price to buy the Crush Berrybrook Middle School 3

Should I buy the Crush Berrybrook Middle School 3 now?

This is a great price to buy! There's a 66% probability this price will be higher. Our advise is Buy it now.

What is the current price of Crush Berrybrook Middle School 3?

What was the lowest price for the Crush Berrybrook Middle School 3?