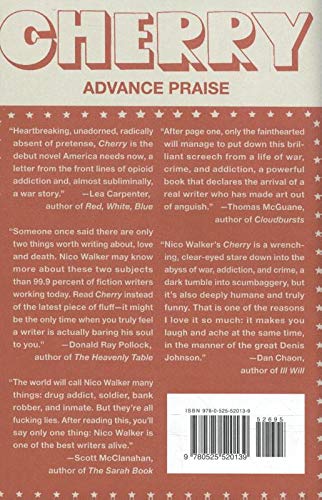 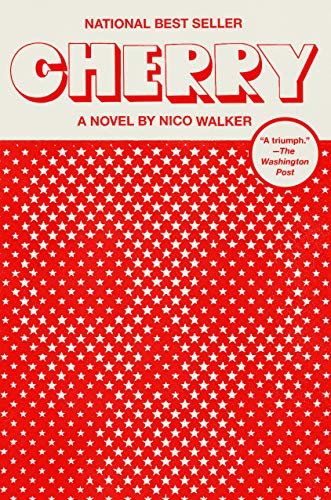 Product Description National BestsellerSoon to be a major motion picture starring Tom Holland and directed by the Russo Brothers. A young medic returns from deployment in Iraq to two things: the woman he loves, and the opioid crisis sweeping across the Midwest.  In this “miracle of literary serendipity” ( The Washington Post), after finding himself deep in the thrall of heroin addiction, the soldier arrives at what seems like the only logical solution: robbing banks.      Written by a singularly talented, wildly imaginative debut novelist,  Cherry is a bracingly funny and unexpectedly tender work of fiction straight from the dark heart of America.  A PEN/HEMINGWAY AWARD FINALIST A  NEW YORK TIMES NOTABLE BOOK ONE OF THE BEST BOOKS OF THE YEAR:  THE NEW YORKER •  ENTERTAINMENT WEEKLY •  VULTURE •  VOGUE •  LIT HUB Amazon.com Review Cherry by Nico Walker is a mesmerizingly dark, comic, often drug-fueled ride through war, romance and bank heists. You’ll laugh out loud, your mind will bend to understand the gritty, ceaseless pressure of being an Army medic in Iraq, and your stomach will hurt with the pain of PTSD and what drugs can do to a body and a mind. Nico Walker is a gifted, unrelenting storyteller and his debut calls to mind the raw and wrecked characters of Denis Johnson and the devastatingly necessary post-war stories of Phil Klay. While at times bleak, this is a novel of our time, a story about a Midwestern boy who falls in love, enlists in the Army (because school is not for him and what else is he going to do), returns from war and falls prey to the escapes of heroin. An explosively cutting and page-turning debut. --Al Woodworth Review “ Cherry is a miracle of literary serendipity, a triumph. . . . [Walker’s] language, relentlessly profane but never angry, simmers at the level of morose disappointment, something like Holden Caulfield Goes to War. . . . His prose echoes Ernest Hemingway’s cadences to powerful effect. . . . Cherry is written without an ounce of self-pity by an author allergic to the meretricious poetry of despair. In these propulsive pages, Walker draws us right into the mind of an ordinary young man beset by his own and his country’s demons. In the end, his only weapon against disintegration is his own devastating candor.” — The Washington Post “The rare work of literary fiction by a young American that carries with it nothing of the scent of an MFA program. . . . The voice Walker has fashioned has a lot in common with the one Denis Johnson conjured for his masterpiece  Jesus’ Son. . . . A novel of searing beauty.” — Vulture“A singular portrait of the opioid epidemic. . . . [Walker] writes dialogue so musical and realistic you’ll hear it in the air around you.” — The New York Times Book Review“[An] unforgettable mix of doomed and dazzling. . . . There’s a vivid, repulsive truth in the way Walker renders his subjects—a sort of social truth, stripped of morality, which is rare and riveting when it comes to the subjects of opioid addiction, intimate everyday cruelty, and endless, meaningless war.” — The New Yorker “One of the summer’s most exciting literary breakthroughs,  Cherry is a profane, raw, and harrowingly timely account of the effects of war and the perils of addiction.” — Entertainment Weekly "A buzzsaw of a novel. . . . Bracingly original." — The Wall Street Journal“A raw coming-of-age story in reverse. . . . Cherry touches on some of the darkest chapters of recent American history.” — The New York Times “Walker tells the story in a biting staccato, by turns shrewd, heartfelt, and repellent. . . . Cherry's descriptions of Army life are as acerbic and unsparing—and often darkly hilarious—as the boot-camp scenes from  Full Metal Jacket.” — Mother Jones“Walker’s raw confessional novel, aptly compared to  Jesus’ Son and  Reservoir Dogs, is a devastating example of art imitating life.” — Esquire, “The Best Books of 2018 (So Far)”  “Heavily indebted to the profane b

Cherry A Novel, is it available on Amazon?

Yes! But at Pricepulse we inform you when is the lowest price to buy the Cherry A Novel

Should I buy the Cherry A Novel now?

What is the current price of Cherry A Novel?

What was the lowest price for the Cherry A Novel?