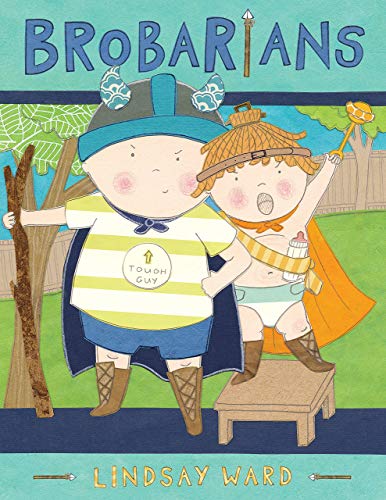 Product Description This is the tale of the mighty Brobarians. Two warriors, once at peace…now at odds. Iggy the Brobarian has taken over the land. Can Otto the Big Brobarian win it back? Or maybe, with a little help, the two brothers can find peace again… This is an epic―and adorable―story of sibling rivalry and resolution. From School Library Journal PreS-Gr 1—In this tongue-in-cheek tale of two warriors, brothers Iggy and Otto find themselves at odds over a broken cookie jar. Endpapers provide a childlike, crayon-scrawled map of the brothers' backyard and the kingdom they've imagined within it. Iggy quickly conquers magical beasts (the family dog) and colossal monsters (the patio barbecue), and eventually he seizes Otto's army (of toy soldiers). When Otto the Big Brobarian hatches a plan to capture Iggy's most prized possession (his bottle), a clash of two titans ensues, and a summoning echoes across the kingdom: Mamabarian. The warriors drop their weapons and march straight to the tub. Ward's plot cleverly celebrates the spirit of imaginative toddlers, and her cartoonlike cut-paper collage, pencil, and crayon illustrations playfully match the humor of the tale. VERDICT A boisterous, silly picture book that would work well for storytime. An amusing but nonessential addition.—Brianne Colombo,Pequannock Township Public Library, NJ Review "It's [Ward's] text, written with florid tale-as-old-as-time bravura, that delivers the real treat.…As read-alouds go, [Brobarians is] pretty epic." ―Publishers Weekly "Good and campy and a fine opportunity for vocabulary building." ―Kirkus Reviews About the Author Born and raised in sunny California, Lindsay Ward decided to try snow and moved to the East Coast, where she received her BFA in illustration from Syracuse University. Since then she has bounced around a bit, living in New York, Boston, and Cleveland, which she now calls home. Most days you can find her writing and sketching at home, where she lives with her family: Frank, Jackson, and Sally. Learn more about her online at www.lindsaymward.com.

Amazing
Great
Average
High
This is a great price to buy! There's a 88% probability this price will be higher. Our advice is Buy it now.
Buy on Amazon

Brobarians, is it available on Amazon?

Yes! But at Pricepulse we inform you when is the lowest price to buy the Brobarians

Should I buy the Brobarians now?

This is a great price to buy! There's a 88% probability this price will be higher. Our advice is Buy it now.

What is the current price of Brobarians?

What was the lowest price for the Brobarians?