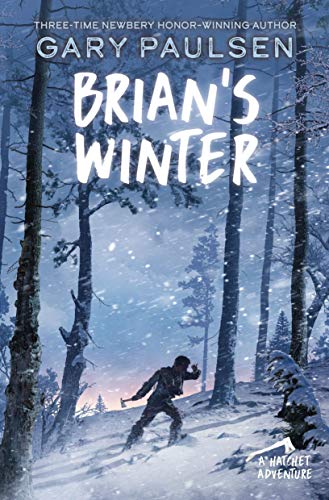 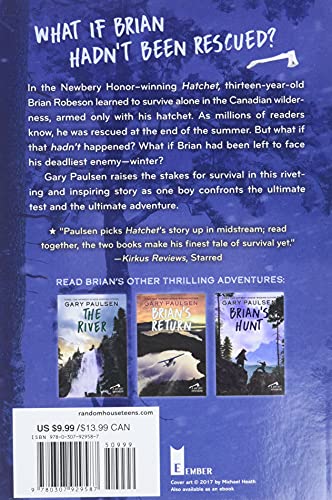 Product Description From three-time Newbery Honor-winning author Gary Paulsen comes a beloved follow-up to his award-winning classic Hatchet that asks: What if Brian hadn't been rescued and had to face his deadliest enemy yet--winter?   In the Newbery Honor-winning Hatchet, thirteen-year-old Brian Robeson learned to survive alone in the Canadian wilderness, armed only with his hatchet. As millions of readers know, he was rescued at the end of the summer. But what if that hadn't happened? What if Brian had been left to face his deadliest enemy--winter?   Brian Paulsen raises the stakes for survival in this riveting and inspiring story as one boy confronts the ultimate adventure.   “Paulsen picks Hatchet’s story up in midstream; read together, the two books make his finest tale of survival yet.” — Kirkus Reviews, Starred   “Breathtaking descriptions of nature . . . Paulsen fans will not be disappointed.” — School Library Journal Read all the Hatchet Adventures! Brian's WinterThe RiverBrian's ReturnBrian's Hunt Review "Paulsen crafts a companion/sequel to Hatchet containing many of its same pleasures...Read together, the two books make his finest tale of survival yet." -- Kirkus Review, Pointer "Paulsen at his best." -- Booklist "Breathtaking...mesmerizing." -- School Library Journal About the Author GARY PAULSEN is the distinguished author of many critically acclaimed books for young people. His most recent books are Flat Broke; Liar, Liar; Masters of Disaster; Lawn Boy Returns; Woods Runner; Notes from the Dog; Mudshark; Lawn Boy; Molly McGinty Has a Really Good Day; The Time Hackers; and The Amazing Life of Birds (The Twenty Day Puberty Journal of Duane Homer Leech). Excerpt. © Reprinted by permission. All rights reserved. For two weeks the weather grew warmer and each day was more glorious than the one before. Hunting seemed to get better as well. Brian took foolbirds or rabbits every day and on one single day he took three foolbirds. He ate everything and felt fat and lazy and one afternoon he actually lay in the sun. It was perhaps wrong to say he was happy. He spent too much time in loneliness for true happiness. But he found himself smiling as he worked around the camp and actually looked forward to bringing in wood in the soft afternoons just because it kept him out rummaging around in the woods. He had made many friends--or at least acquaintances. Birds had taken on a special significance for him. At night the owls made their soft sounds, calling each other in almost ghostly hooonnes that scared him until he finally saw one call on a night when the moon was full and so bright it was almost like a cloudy day. He slept with their calls and before long would awaken if they didn't call. Before dawn, just as gray light began to filter through the trees, the day birds began to sing. They started slowly but before the gray had become light enough to see ten yards all the birds started to sing and Brian was brought out of sleep by what seemed to be thousands of singing birds. At first it all seemed to be noise but as he learned and listened, he found them all to be different. Robins had an evening song and one they sang right before a rainstorm and another when the rain was done. Blue jays spent all their time complaining and swearing but they also warned him when something--anything--was moving in the woods. Ravens and crows were the same--scrawking and cawing their way through the trees. It was all, Brian found, about territory. Everybody wanted to own a place to live, a place to hunt. Birds didn't sing for fun, they sang to warn other birds to keep away--sang to tell them to stay out of their territory. He had learned about property from the wolves. Several times he had seen a solitary wolf--a large male that came near the camp and studied the boy. The wolf did not seem to be afraid and did nothing to frighten Brian, and Brian even thought of him as a kind of frie