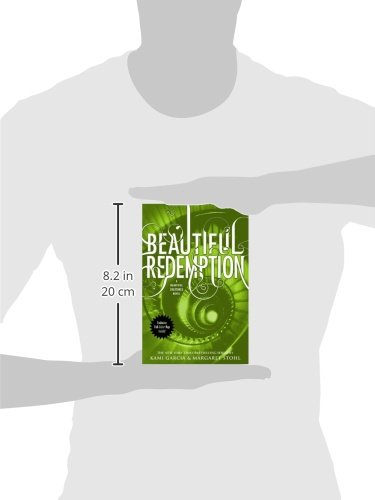 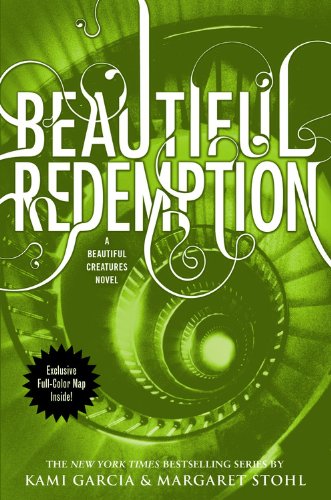 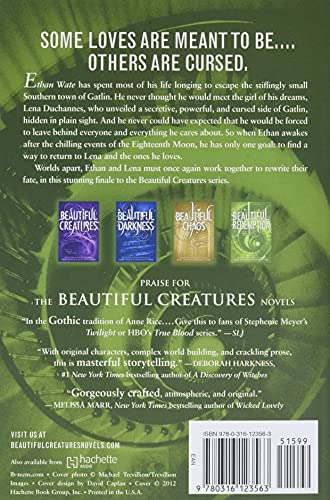 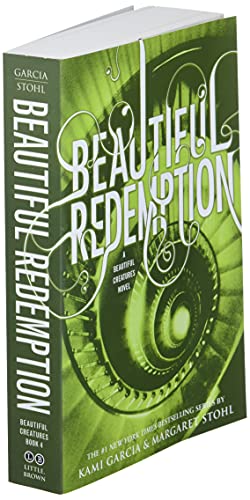 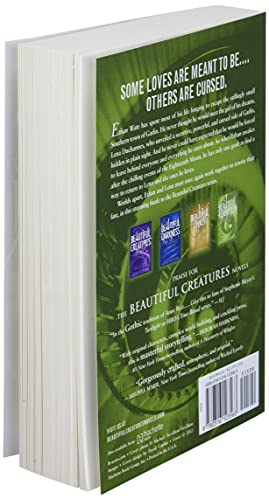 Product Description Is death the end . . . or only the beginning?Ethan Wate has spent most of his life longing to escape the stiflingly small Southern town of Gatlin. He never thought he would meet the girl of his dreams, Lena Duchannes, who unveiled a secretive, powerful, and cursed side of Gatlin, hidden in plain sight. And he never could have expected that he would be forced to leave behind everyone and everything he cares about. So when Ethan awakes after the chilling events of the Eighteenth Moon, he has only one goal: to find a way to return to Lena and the ones he loves.Back in Gatlin, Lena is making her own bargains for Ethan's return, vowing to do whatever it takes -- even if that means trusting old enemies or risking the lives of the family and friends Ethan left to protect. Worlds apart, Ethan and Lena must once again work together to rewrite their fate, in this stunning finale to the Beautiful Creatures series. Review "The fourth and final installment picks up after the massive cliff-hanger in Beautiful Chaos and doesn't disappoint."―Entertainment Weekly"The Beautiful Creatures novels contain a potent mix of the gothic, the mythic, and the magical. Readers can look forward to more of what they love in the final installment, Beautiful Redemption, as they follow Ethan's compelling journey to its bittersweet close. With original characters, complex world building, and crackling prose, this is masterful storytelling."―Deborah Harkness, #1 New York Times bestselling author of A Discovery of Witches About the Author Kami Garcia and Margaret Stohl are longtime friends and coauthors of the #1 New York Times bestselling Beautiful Creatures series. The first book in the series, Beautiful Creatures, is now a major motion picture. In addition to writing together, they have written solo novels: Unbreakable, an instant New York Times bestseller and the first book in Kami's series, The Legion; and Icons, the first book in Margaret's Icons series, which is currently in development as a feature film. Both books are available now. Margaret and Kami are currently at work on the sequel to Dangerous Creatures, available in spring 2015. They invite you to visit them online at kamigarcia.com & margaret-stohl.com.

Beautiful Redemption Beautiful Creatures 4, is it available on Amazon?

Yes! But at Pricepulse we inform you when is the lowest price to buy the Beautiful Redemption Beautiful Creatures 4

Should I buy the Beautiful Redemption Beautiful Creatures 4 now?

What is the current price of Beautiful Redemption Beautiful Creatures 4?

What was the lowest price for the Beautiful Redemption Beautiful Creatures 4?