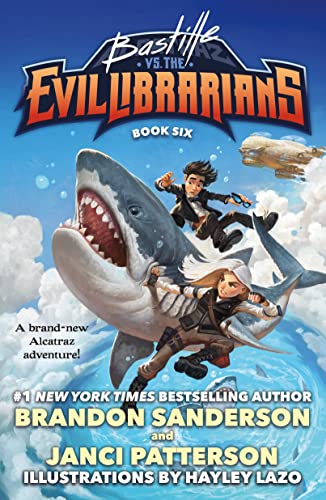 About the Author Brandon Sanderson grew up in Lincoln, Nebraska. He lives in Utah with his wife and children and teaches creative writing at Brigham Young University. He is the author of such bestsellers as the Mistborn® trilogy and its sequels, The Alloy of Law, Shadows of Self, and The Bands of Mourning; the Stormlight Archive novels The Way of Kings and Words of Radiance; and other novels, including The Rithmatist, Steelheart, and Skyward. In 2013, he won a Hugo Award for Best Novella for The Emperor's Soul, set in the world of his acclaimed first novel, Elantris. Additionally, he was chosen to complete Robert Jordan's Wheel of Time® sequence. Janci Patterson received her Master of Arts in creative writing from Brigham Young University. She lives in Orem, Utah with her family. Chasing the Skip is her first novel. Hayley Lazo is the interior illustrator for the Alcatraz vs. the Evil Librarians series, and assorted artist/graphic designer at Dragonsteel Entertainment. Product Description From #1 New York Times bestselling author Brandon Sanderson and Janci Patterson comes Bastille vs. the Evil Librarians, the thrilling conclusion to the Alcatraz vs. the Evil Librarians saga. As a Knight of Crystallia, I, Bastille, swore to protect the Smedry clan from the Evil Librarians. (And believe me, screwups like them constantly need protecting.) But when Alcatraz Smedry got strapped to an altar of outdated encyclopedias to be sacrificed to the dark gods, I arrived too late―and instead his father took his place. Now Alcatraz is a blubbering mess, so it’s up to me lead the charge against his father’s killer: Biblioden, founder of the Evil Librarians―I was sure he died centuries ago!―who’s back to complete his goal of world domination. Now he’s going to use the dark powers he gained from that sacrifice against everyone not under Evil Librarian control. Being burned up from the inside is not how I plan to die, so I’d better figure out some way to stop him or we’re toast! I know Alcatraz is wrong when he swears he’s no hero. But when a hero falls short, that’s the time for everyone else to step up and do what needs to be done.

Bastille Vs The Evil Librarians Alcatraz Versus Th, is it available on Amazon?

Yes! But at Pricepulse we inform you when is the lowest price to buy the Bastille Vs The Evil Librarians Alcatraz Versus Th

Should I buy the Bastille Vs The Evil Librarians Alcatraz Versus Th now?

What is the current price of Bastille Vs The Evil Librarians Alcatraz Versus Th?

What was the lowest price for the Bastille Vs The Evil Librarians Alcatraz Versus Th?