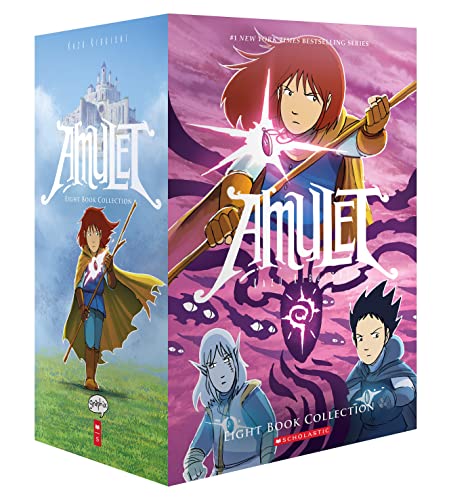 Product Description A collection of the first eight books in Kazu Kibuishi's #1 New York Times bestselling series! After tragedy strikes their family, Emily and Navin move with their mother into the old, mysterious home of their great-grandfather. On their first night in the strange house, Emily and Navin's mom is kidnapped by a tentacled creature. Determined to rescue her, Emily and Navin are led into a world of robots, talking animals, flying ships, new friends... and enemies. Emily learns that she is a Stonekeeper and essential to the survival of this world, and that her incredible story is only just beginning. Review Praise for the Amulet series:A New York Times bestselling series"Five -- no, three pages into Amulet and you'll be hooked." -- Jeff Smith, creator of BONE"Stellar artwork, imaginative character design, moody color and consistent pacing." -- Publishers Weekly"A must for all fantasy fans." -- Kirkus Reviews About the Author Kazu Kibuishi is the creator of the #1 New York Times bestselling Amulet series, which is available in 22 languages. He is also the creator of Copper, a collection of his popular webcomic that features an adventuresome boy-and-dog pair. Kazu also illustrated the covers of the 15th anniversary paperback editions of the Harry Potter series written by J.K. Rowling. He lives and works near San Antonio with his wife, Amy Kim Kibuishi, and their children. Visit Kazu online at boltcity.com

Amulet 1 8 Box Set, is it available on Amazon?

Yes! But at Pricepulse we inform you when is the lowest price to buy the Amulet 1 8 Box Set

Should I buy the Amulet 1 8 Box Set now?

What is the current price of Amulet 1 8 Box Set?

What was the lowest price for the Amulet 1 8 Box Set?