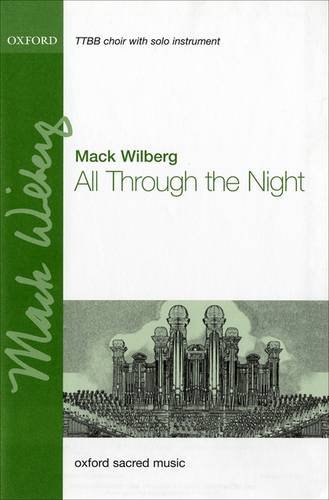 Product Description All Through the Night, for TTBB, solo instrument, and piano, or clarinet, harp, and strings This warm, lush Welsh lullaby is scored for mens voices and piano, with a delicate line for any treble solo About the Author Mack Wilberg is the Music Director of the Mormon Tabernacle Choir. He was appointed Music Director in March 2008, having served as Associate Music Director since May 1999. He is a former professor of music at Brigham Young University, where he received his bachelors degree; his masters and doctoral degrees are from the University of Southern California. In addition to his conducting responsibilities he is active as apianist, choral clinician, composer, arranger, and guest conductor throughout the United States and abroad. In addition to the many compositions he has written for the Mormon Tabernacle Choir, his works have been performed by artists such as Renee Fleming, Frederica von Stade, Bryn Terfel, The Kings Singers, and narrators Walter Cronkite and Claire Bloom. Wilbergs arrangements and compositions are performed and recorded all over the world. With their grandeur, energy, and craftsmanship, they inspire performers and audiences everywhere.

All Through The Night Vocal Score Chant, is it available on Amazon?

Yes! But at Pricepulse we inform you when is the lowest price to buy the All Through The Night Vocal Score Chant

Should I buy the All Through The Night Vocal Score Chant now?

What is the current price of All Through The Night Vocal Score Chant?

What was the lowest price for the All Through The Night Vocal Score Chant?