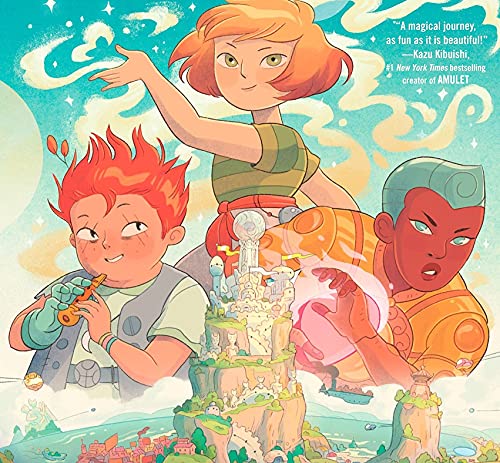 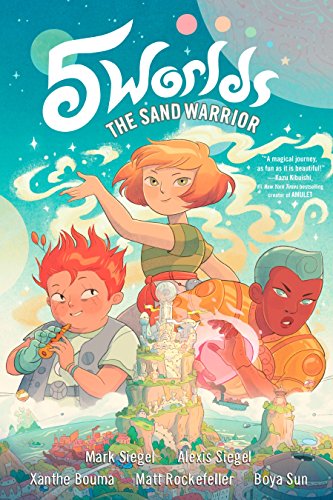 Product Description R. J. Palacio, #1 New York Times bestselling author of WONDER, hails this adventure series as “Mind-blowingly beautiful. . . . A must-read.”Think Star Wars meets Avatar: The Last Airbender!   The Five Worlds are on the brink of extinction unless five ancient and mysterious beacons are lit. When war erupts, three unlikely heroes will discover there’s more to themselves—and more to their worlds—than meets the eye. . . .      • Oona Lee, the clumsiest student at the Sand Dancer Academy, is a fighter with a destiny bigger than she could ever imagine.      • An Tzu, a boy from the poorest slums, has a surprising gift and a knack for getting out of sticky situations.      • Jax Amboy is the star athlete who is beloved by an entire galaxy, but what good is that when he has no real friends?   When these three kids are forced to team up on an epic quest, it will take not one, not two, but 5 WORLDS to contain all the magic and adventure!   "A magical journey, as fun as it is beautiful!” —Kazu Kibuishi, #1 New York Times bestselling creator of AMULET"Bang-zoom . . . a series that promises to be epic." —The New York Times “This stellar team has created a gorgeous and entrancing world like no other!” — Noelle Stevenson, New York Times bestselling author of Nimona   “Epic action, adventure, and mystery will draw you in, but the heartfelt characters and their seemingly impossible journey will keep you turning the pages.” — Lisa Yee, author of the DC Super Hero Girls™ series Review A Publishers Weekly Best Summer Book A Junior Library Guild Selection A New York Public Library’s Top Ten Best Books for Kids 2017Included in NPR’s Guide to 2017’s Great Reads2017 Nerdy Book Club Award Winners for Best Graphic NovelA Texas Library Association Maverick Graphic Novel SelectionA Black-Eyed Susan Book Award Nominee "With sensitive writing, gorgeous artwork, and riveting plot, this is a series to keep an eye on." —Booklist starred review "In a dazzling interplanetary fantasy from the Siegel Brothers, artists Bouma, Rockefeller, and Sun bring to life the cultures, customs, and creatures of a lively new world that will easily appeal to fans of Naruto or Avatar: The Last Airbender." —Publishers Weekly starred review "This sweeping graphic-novel saga features inventive world-building, with history, mythology, and traditions naturally integrated into the narrative. The installment ends triumphantly and tantalizingly; readers will eagerly await book two." —The Horn Book Magazine About the Author MARK SIEGEL has written and illustrated several award-winning picture books and graphic novels, including the New York Times bestseller Sailor Twain, or the Mermaid in the Hudson. He is also the founder and editorial director of First Second Books. He lives with his family in New York. Follow Mark on Tumblr at @marksiegel and the 5 Worlds team on Twitter at @5WorldsTeam.   ALEXIS SIEGEL is a writer and translator based in London, England. He has translated a number of bestselling graphic novels, including Joann Sfar’s The Rabbi’s Cat, Pénélope Bagleu’s Exquisite Corpse, and Gene Luen Yang’s American Born Chinese (into French).   XANTHE BOUMA is an illustrator based in Southern California. When not working on picture books, fashion illustration, and comics, Xanthe enjoys soaking up the beachside sun. Follow Xanthe on Tumblr at @yumbles and on Twitter at @xoxobouma.   MATT ROCKEFELLER is an illustrator and comic book artist from Tucson, Arizona. His work has appeared in a variety of formats, including book covers, picture books, and animation. Matt lives in New York City. Follow him on Tumblr at @mrockefeller and on Twitter at @mcrockefeller.   BOYA SUN is an illustrator and co-author of the graphic novel Chasma Knights. Originally from China, Boya has traveled from Canada to the United States and now resides in the charming city of Baltimore. Follow Boya on Tumblr at @boyasun and on Twitter at @b

5 Worlds Book 1 The Sand Warrior, is it available on Amazon?

Yes! But at Pricepulse we inform you when is the lowest price to buy the 5 Worlds Book 1 The Sand Warrior

Should I buy the 5 Worlds Book 1 The Sand Warrior now?

What is the current price of 5 Worlds Book 1 The Sand Warrior?

What was the lowest price for the 5 Worlds Book 1 The Sand Warrior?