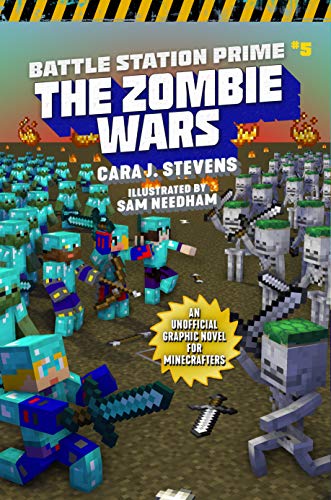 Product Description Attention, Minecraft fans! Take a wild trip into the game you love with a new graphic novel from Cara J. Stevens. Over 700 color illustrations! The kids of Battle Station Prime continue to fight against the unknown villain who has been sending armies of skeletons, but Brooklyn’s recent invention of an automatic Zombie spawner could change the face of this unending battle. With the zombies on their side, they just might have a chance to uncover the truth about the enemies of the Prime Knight and save their homes. As daily battles of skeletons against zombies are becoming routine, the kids are beginning to think about their place at the battle station and their true purpose. While some choose to return home to fight with their families on different battlefronts, others redouble their efforts to protect the station. Will Pell and Logan’s lifelong friendship survive this test? Has Zoe’s recent run-in with Herobrine’s ghost changed her forever? Who will win the ultimate cook-off battle between Ned and the kids’ ultimate automatic food machine? Learn all the answers and more in Book 5: The Zombie Wars! About the Author Cara J. Stevens has a deep and abiding love for video games, science fiction and writing. She began her career designing interactive games and stories based on books and is happy to come full circle, creating stories based on video games. She has written nine other books for kids, including the novel Dragon School. When she’s not writing or hanging out at the beach, she can be found playing pinball, WiiU, and classic Atari games. Cara lives in Old Greenwich, Connecticut with her husband, two children, and a loud, fluffy dog named Oliver. Sam Needham is a 2D and 3D animator and Illustrator who enjoys making art for the games, film, television, and comic book industries.

Zombie Wars An Unofficial Graphic Novel For Minecr, is it available on Amazon?

Yes! But at Pricepulse we inform you when is the lowest price to buy the Zombie Wars An Unofficial Graphic Novel For Minecr

Should I buy the Zombie Wars An Unofficial Graphic Novel For Minecr now?

What is the current price of Zombie Wars An Unofficial Graphic Novel For Minecr?

What was the lowest price for the Zombie Wars An Unofficial Graphic Novel For Minecr?