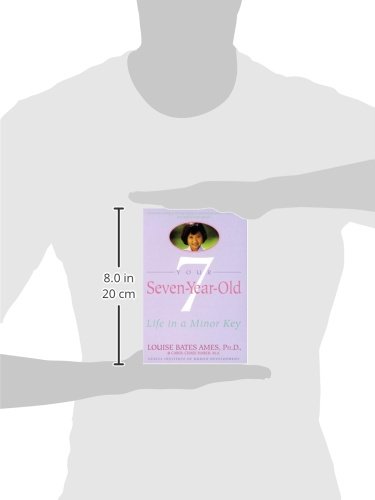 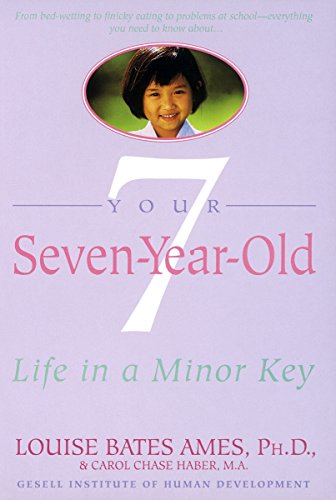 Product Description Your Seven-Year-Old is devoted to the delightful but often anxious and withdrawn child of Seven. Although any seven-year-old will have moments of exuberance, security, and happiness, in general this is an age of introspection. As it begins, parents and teachers may welcome the quiet after the tussles and tangles of Six. But once the child of Seven starts to withdraw it’s almost as though he doesn't know where or when to stop. Seven-year-olds feel picked on by family, friends, and teachers alike; they worry that no one likes them; they expect every little task to prove too difficult to handle; tears come easily at this age.   With wit and wisdom, Dr. Ames of the highly respected Gesell Institute and Carol Chase Haber offer insights into what children this age are feeling and thinking, and how parents can best deal with these moody, serious Sevens.   Included in this book: • New body awareness • Sulking • Concerns about fairness • Stories from real life • Fascination with horror, gore • Threats of running away from home • Life in the second grade • Books for Sevens and the parents of Sevens   “Louise Bates Ames and her colleagues synthesize a lifetime of observation of children, consultation, and discussion with parents. These books will help parents to better understand their children and will guide them through the fascinating and sometimes trying experiences of modern parenthood.”—Donald J. Cohen, M.D., Director, Yale Child Study Center, Irving B. Harris Professor of Child Psychiatry, Pediatrics, and Psychology, Yale School of Medicine About the Author Louise Bates Ames is a lecturer at the Yale Child Study Center and assistant professor emeritus at Yale University. She is co-founder of the Gesell Institute of Child Development and collaborator or co-author of three dozen or so books, including The First Five Years of Life, Infant and Child in the Culture of Today, Child Rorschach Responses, and the series Your One-Year-Old through Your Ten- to Fourteen-Year-Old. She has one child, three grandchildren, and four great-grandchildren.   Carol Chase Haber is a school psychologist in the Hamilton County, Ohio, school system and is a trained and qualified Gesell Examiner. She is the co-author of several books, including He Hit Me First, Your Seven-Year-Old, Your Eight-Year-Old, and Your Nine-Year-Old. Excerpt. © Reprinted by permission. All rights reserved. chapter one CHARACTERISTICS OF THE AGE   The Seven-year-old is a very special person and Seven a unique and highly distinctive age. It stands out, coming as it does between the positive vigor of Six and the broad expansiveness of Eight. Although any Seven, like anybody else, will have his many moments of exuberance, security and happiness, this is in general an age of withdrawal, of pulling in, of calming down. As it begins, parents and teachers may be somewhat relieved. A little calm and quiet is welcome after the tussles and tangles of Six. But once the child of Seven starts to withdraw, it is almost as though he doesn’t know where or when to stop. He goes on and on with his withdrawal until it almost seems that he might be more comfortable and contented if there were actually no other people in the world. Some Six-year-olds seem ready to talk to almost anybody, to share themselves and their ideas and warm emotions. Seven may be much more silent and less giving in company.   People all too often do not behave in a way that satisfies the child of this age, who thinks they are mean, hateful, unfriendly, always picking on him. He thinks his teacher, especially, picks on him, and parents of Seven-year-olds are well advised not to believe all the tales of maltreatment and unfairness that their children may bring home from school.   Seven-year-olds tend to think that people don’t like them, or fear that people may not like them: “Of course the kids will make fun of me.” The child may often be moody, morose, a

Amazing
Great
Average
High
It's not a good time to buy now, there's a 76% probability this price will decrease. Our advice is to Watch it.
Buy on Amazon

Your Seven Year Old Life In A Minor Key, is it available on Amazon?

Yes! But at Pricepulse we inform you when is the lowest price to buy the Your Seven Year Old Life In A Minor Key

Should I buy the Your Seven Year Old Life In A Minor Key now?

It's not a good time to buy now, there's a 76% probability this price will decrease. Our advice is to Watch it.

What is the current price of Your Seven Year Old Life In A Minor Key?

What was the lowest price for the Your Seven Year Old Life In A Minor Key?