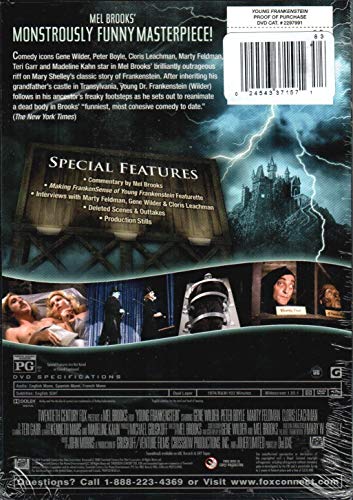 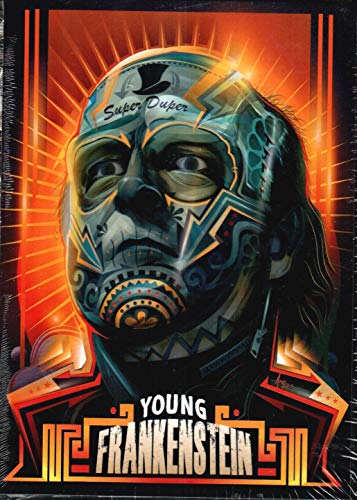 Product Description Absurd Dr. Frankenstein visits the family castle in Transylvania and makes a monster. Directed by Mel Brooks. The package may come with a special cardboard cover of 'The Monster' Amazon.com If you were to argue that Mel Brooks's Young Frankenstein ranks among the top-ten funniest movies of all time, nobody could reasonably dispute the claim. Spoofing classic horror in the way that Brooks's previous film Blazing Saddles sent up classic Westerns, the movie is both a loving tribute and a raucous, irreverent parody of Universal's classic horror films Frankenstein (1931) and Bride of Frankenstein (1935). Filming in glorious black and white, Brooks re-created the Frankenstein laboratory using the same equipment from the original Frankenstein (courtesy of designer Kenneth Strickfaden), and this loving attention to physical and stylistic detail creates a solid foundation for nonstop comedy. The story, of course, involves Frederick Frankenstein (Gene Wilder) and his effort to resume experiments in re-animation pioneered by his late father. (He's got some help, since dad left behind a book titled How I Did It.) Assisting him is the hapless hunchback Igor (Marty Feldman) and the buxom but none-too-bright maiden Inga (Teri Garr), and when Frankenstein succeeds in creating his monster (Peter Boyle), the stage is set for an outrageous revision of the Frankenstein legend. With comedy highlights too numerous to mention, Brooks guides his brilliant cast (also including Cloris Leachman, Madeline Kahn, Kenneth Mars, and Gene Hackman in a classic cameo role) through scene after scene of inspired hilarity. Indeed, Young Frankenstein is a charmed film, nothing less than a comedy classic, representing the finest work from everyone involved. Not one joke has lost its payoff, and none of the countless gags have lost their zany appeal. From a career that includes some of the best comedies ever made, this is the film for which Mel Brooks will be most fondly remembered. Befitting a classic, the Special Edition DVD includes audio commentary by Mel Brooks, a "making of" documentary, interviews with the cast, hilarious bloopers and outtakes, and the original theatrical trailers. No video library should be without a copy of Young Frankenstein. And just remember--that's Fronkensteen. --Jeff Shannon Beyond Young Frankenstein High Anxiety Spaceballs Blazing Saddles Stills from Young Frankenstein (Click for larger image)

Current price$4.99
Since 4 days
Average price$7.22
Based on 10 years
Lowest price ever$3.98
8 years ago
Highest price ever$14.98
4 years ago
Amazing
Great
Average
High
This is absolutely the best time to buy. Don’t miss out, there's 67% probability of this price being higher soon. Buy now.
Buy on Amazon

Young Frankenstein, is it available on Amazon?

Yes! But at Pricepulse we inform you when is the lowest price to buy the Young Frankenstein

Should I buy the Young Frankenstein now?

What is the current price of Young Frankenstein?

What was the lowest price for the Young Frankenstein?