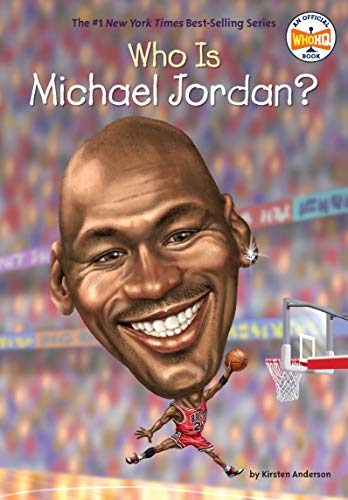 Product Description Grab your Js and hit the court with this Who Was? biography about NBA superstar Michael Jordan. Meet the man who changed the game forever. Michael Jordan has always been competitive--even as a young boy, he fought for attention. His need to be the best made him a star player on his college basketball team and helped him become an NBA legend, both for his skills and his endorsements. His Nike contract for Air Jordan basketball shoes set an unmatched precedent for professional athletes. Author Kirsten Anderson takes readers through each exciting moment, detailing the iconic reverse lay-ups and jump shots of Michael Jordan's storied career. About the Author Kirsten Anderson is a freelance writer and actress who lives in New York City with her charming Pomeranian, Sunflower. She has written several biographies for children, including Who Was Andy Warhol? and Who Was Robert Ripley? Excerpt. © Reprinted by permission. All rights reserved. Who Is Michael Jordan?     There was less than a minute to go in the 1982 college basketball championship game, one of the biggest events in sports. The Hoyas, Georgetown University’s men’s basketball team, had taken a one-point lead over their rivals, the Tar Heels from the University of North Carolina. With thirty-two seconds left, Carolina coach Dean Smith called a time-out so he could discuss their next moves with his players.   The team, in their white-and-blue uniforms, gathered around their coach. He knew that Georgetown would carefully guard James Worthy and Sam Perkins, two UNC players who had become big stars. Coach Smith had to decide who else could take a shot at scoring a basket if Worthy and Perkins couldn’t get free from defenders. He thought the team should try to get the ball to Michael.   Michael Jordan was a nineteen-year-old freshman at UNC in 1982. Coach Dean Smith rarely let freshmen play. He thought the first-year students needed to watch and learn—from the bench—before they were ready to play big-time college basketball.   But Michael stood out. He was quick and could jump high. He was tough and energetic. Even better, he loved to work and to learn. He practiced hard and listened to his coaches’ instructions. Coach Smith knew he was different. He put Michael in the starting lineup for the first game of the season, and he stayed there all year.   Now, with seconds left on the clock, Coach Smith was going to trust the team’s chance at a championship to the freshman, Michael Jordan. Everyone knew he had the talent to make the shot. But even more importantly, Michael had the confidence. Some athletes would be scared by this big moment. They might be afraid of making a mistake. And they certainly didn’t want to be the one to lose the game. Michael was another kind of athlete. He wanted to take the shot.   The time-out ended and the players got ready to go back on the court. Their coach had only one thing to say: “Knock it in, Michael.”   The clock started again. The Georgetown players swarmed Worthy and Perkins. Michael waited on the other side of the court. With fifteen seconds left, Jimmy Black passed the ball to him. Michael caught it and jumped in the air. The ball left his hands and sailed sixteen feet to the basket.  It swished in and the Tar Heels took a one-point lead. The crowd roared.   Georgetown had time to make another shot, but their players couldn’t seem to score. The clock ticked down to zero. The UNC Tar Heels were the 1982 college basketball champions!   After the game, Michael told a reporter that he hadn’t felt any pressure. It was just another jump shot.   That was the very first game-winning shot made by Michael Jordan. It was far from the last. He would go on to win six NBA championships and two Olympic gold medals. He was named Most Valuable Player five times and played on fourteen All-Star teams. Many people consider him the greatest basketball player ever and one of the greatest athletes of all time.

Current price$3.49
Since 17 days
Average price$4.52
Based on 2 years
Lowest price ever$2.88
13 months ago
Highest price ever$5.99
17 days ago
Amazing
Great
Average
High
This is absolutely the best time to buy. Don’t miss out, there's 51% probability of this price being higher soon. Buy now.
Buy on Amazon

Pig the Stinker (Pig the Pug)

Pete the Cat and His Magic Sunglasses

Who Is Michael Jordan Who Was, is it available on Amazon?

Yes! But at Pricepulse we inform you when is the lowest price to buy the Who Is Michael Jordan Who Was

Should I buy the Who Is Michael Jordan Who Was now?

This is absolutely the best time to buy. Don’t miss out, there's 51% probability of this price being higher soon. Buy now.

What is the current price of Who Is Michael Jordan Who Was?

What was the lowest price for the Who Is Michael Jordan Who Was?

The lowest historical price was $2.88