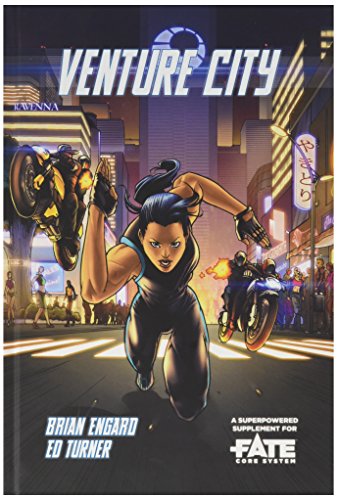 From the Manufacturer It's not safe to venture into Venture City Take a trip to Venture City, a world of superpowers, villainous corporations, and ruthless gangs, set in a near-future where powers are for sale. From the corporate sponsored heroes to the supervillains in the news, and all the way down to the little guys who try to hide their powers, there are superheroes everywhere you see. Bring them to your Fate Core table with this Venture City compilation, which includes both Venture City Stories and Venture City Powers, written by masterminds Brian Engard and Ed Turner. The Venture City compilation requires Fate Core to play. Inside, you'll find: An exciting new take on Fate-style superpowers, including suggestions on power suites; A fully developed world full of rival factions, shady figures, and a variety of locations for the perfect showdown; A simple system that uses issues to drive plot and gameplay; A variety of pre generated characters to drop into your campaigns; A sample adventure—Nothing Ventured—plus a series of adventure seeds to help build a variety of campaign lengths.  Venture City. Pick a side, pay your bill, and power up.

Monopoly Game: Disney Frozen 2 Edition Board Game for Ages 8 and Up

Spectre The Board Game | Spy Vs. Spy Strategy Game Based on The James Bond Movies for Adults and Kids | Ages 10+ | 2-4 Players | Average Playtime 20-45 Minutes | Made by Modiphius Entertainment

Venture City Fate Core, is it available on Amazon?

Yes! But at Pricepulse we inform you when is the lowest price to buy the Venture City Fate Core

Should I buy the Venture City Fate Core now?

What is the current price of Venture City Fate Core?

What was the lowest price for the Venture City Fate Core?