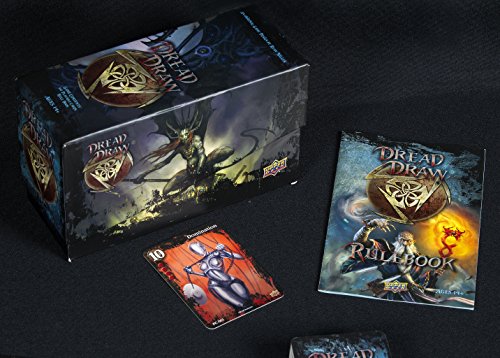 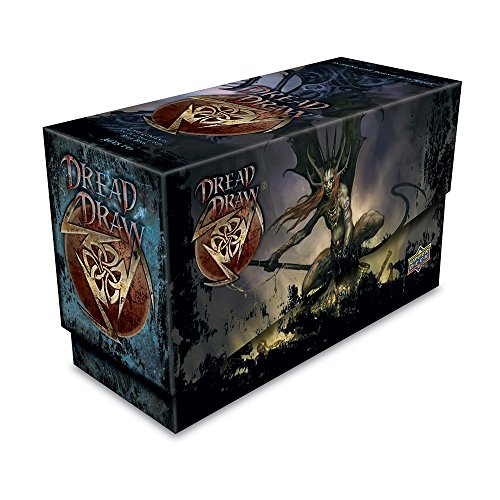 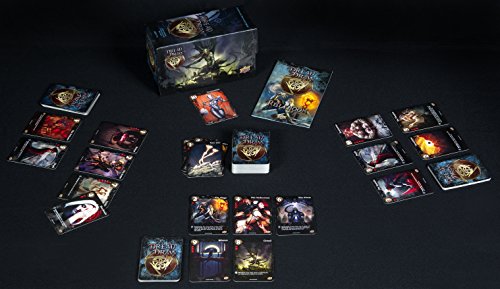 Dread Draw™ – A strategy card game of press your luck competitive fortune telling. Each round players take turns trying to summon cards from the Draw Deck. Summoned cards must have a greater strength than the one you summoned last. Failure will result in your elimination from the round and loss of cards from your Life Deck. Be the last one standing to win the game. Will fortune smile upon you? Setting Up a Game: At the beginning of the game each player is dealt 10 cards face down. These cards form each player's Life Deck. Players can never look at the cards in their Life Deck unless the game or a card effect allows them to. Playing the Game: The game is played in a series of rounds. During each round, players take turns in trying to summon cards. A round ends when only one player remains, making that player the winner of that round. A new round then begins. At the end of the round, each eliminated player will take damage, which is represented by discarding cards from their Life Deck. If you are eliminated and have no cards in your Life Deck, then you are defeated and are out of the game. The last player remaining in the game wins! The Turn: The player who was randomly chosen to go first takes the first turn of the opening round. On your turn, you must try to summon a card. Initially, you'll try to summon a card from the Draw Deck, but as the game progresses you might be able to summon cards from your reserves as you accumulate them. To summon a card from the top of the Draw Deck, reveal that card. If its strength is greater than the strength of the last card you summoned, then you've successfully summoned that card. Place it to the right of the last card you summoned. This is known as Escalating. If you summoned the card successfully, you may use any Summon ability that it may have; though using it is entirely optional. If the card's strength is not greater than the last card you summoned, then discard the card you drew from the Draw Deck, and you are eliminated from the round. Discard any other cards you summoned this round. After a player summons a card, or fails to summon a card, play passes to the player with the lowest total strength among their summoned cards. If there is a tie, and the current player is one of the tied players, then the current player takes the next turn. Otherwise, play passes to the next player to their left that is tied for lowest. If the Draw Deck runs out of cards, shuffle the cards in the discard pile to make a new Draw Deck. Ending the Round: A round ends when only one player remains in the round. The winning player adds up the damage values of their summoned cards. Each "Red dot" on a summoned card represents a single damage point. Each opponent takes that much damage, starting with the player to the winner's left, and going around the table. Once each player has taken their damage from their Life Deck, the winner discards their summoned cards and becomes the starting player for the next round. The Life Deck: Whenever you take damage, draw that many cards from your Life Deck and choose one of them to go to your reserves. Discard the other cards. If you're out of cards while drawing, you are still in the game - you don't get defeated until you take damage while having no cards in your Life Deck. If an ability allows you to gain life, put that many cards from the Draw Deck on top of your Life Deck without looking at them. The Reserves: Whenever you place a card in your reserves, put it next to your Life Deck so you don't confuse it with the cards you summon during the round. If the card has a Reserve ability, you may play it now. Whenever you must summon a card, you may choose to summon one from your reserves instead of revealing a card from the Draw Deck. You can choose any card with strength greater than the last card you summoned this round and put it to the right of that card. If it has a Summon ability, you may play it - play then passes per the normal rules. Abilities: Most abilit

Amazing
Great
Average
High
This is absolutely the best time to buy. Don’t miss out, there's 68% probability of this price being higher soon. Buy now.
Buy on Amazon

Upper Deck Dead Draw, is it available on Amazon?

Yes! But at Pricepulse we inform you when is the lowest price to buy the Upper Deck Dead Draw

Should I buy the Upper Deck Dead Draw now?

This is absolutely the best time to buy. Don’t miss out, there's 68% probability of this price being higher soon. Buy now.

What is the current price of Upper Deck Dead Draw?

What was the lowest price for the Upper Deck Dead Draw?