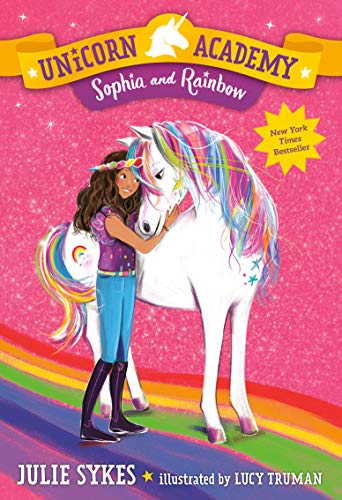 Product Description What if your best friend was a unicorn? Chapter book readers will love this magical new series about a school where every rider gets a unicorn to call her own! Imagine a school where you meet your own unicorn and learn to talk to them! Sophia is sure she and her unicorn, Rainbow will be great partners, but their first test isn't a part of their lessons. Sparkle Lake gives unicorns their magic, and when it starts turning a funny color, everything goes wrong! Can Sophia and Rainbow brave the dangerous woods to save the unicorns' magic? Fans of Rainbow Magic, Purrmaids, and Princess Ponies will love this new chapter book series about the magic of bonding with your own unicorn. About the Author As a child, Julie Sykes was always telling tales. She still loves stories and has written many books. Julie lives in England in an old cottage with her family and a white wolf disguised as a dog. When she's not writing, she likes eating cake, reading, and walking, often at the same time. Visit her at juliesykes.co.uk. Since graduating from Loughborough University with a degree in illustration, Lucy Truman has become one of the UK's leading commercial illustrators. Her inspiration often comes from the very funny little people in her own life, including family holidays with her nephew as well as her own children. Visit her at lucytruman.com. Excerpt. © Reprinted by permission. All rights reserved. “We’re almost at the school!” exclaimed Sophia, seeing a sign just ahead. The swirly gold writing on it said Unicorn AcAdemy beside a painting of a snow-white unicorn with a rainbow arching over its head. An arrow pointed up a long, tree- lined drive. “Race you!” called Harry, Sophia’s seven-year- old brother. Sophia couldn’t wait to see the school after five hours of riding, and she would have loved to gallop, but she slid from her shaggy gray pony’s back and patted his neck fondly. “Sorry, Harry, but Clover’s tired. I’m not going to make him race.” Clover, who was old and couldn’t go fast anymore, pushed his nose gratefully into Sophia’s hair. Her wavy black curls hung over his muzzle like a droopy mustache. Sophia giggled, but there was a heavy weight in her stomach. Now that she was ten, she was thrilled to be old enough to attend Unicorn Academy and finally get a unicorn of her own. But she was really going to miss Clover! “All right, sweetie?” asked her mom, trotting up alongside. Solitaire, her mom’s unicorn, was fully grown and looked very elegant compared to short- legged Clover. “You’re going to have a fantastic time here at the school, but I expect it feels quite strange at the moment. Remember to be polite and please try to think first before rushing into things.” Sophia grinned. “As if I’d do that, Mom!” “Hmm,” her mom said, raising her eyebrows. Then her expression softened. “Remember that all the other girls and boys will probably be feeling as nervous as you. But it won’t be long before you get to know each other.” “I am a little bit nervous about making friends,” admitted Sophia, “but I’m more worried about Clover.” She stroked Clover’s neck. “Do you think he’ll be okay without me?” “He’ll be fine,” said her mom. “He’s getting old, and he’ll be happy having a quieter life. Harry and I will make sure he gets lots of cuddles. Don’t worry about Clover. Just enjoy getting to know your own special unicorn, bonding and learning to work together to protect our island.” Sophia’s heart swelled. She loved the thought of protecting Unicorn Island, their beautiful home. “I wonder what my unicorn will be like and what its magical power will be. I hope it can heal like Solitaire.” Each unicorn was born with its own special magical power. There were many different powers, and young unicorns usually found out what they could do in their first year at Unicorn Academy. Sophia’s mom leaned down to push a stray black curl out of Sophia’s eyes. “I’m sure you’ll love your unicorn, whatever power it has.” Sophia fel
Buy on Amazon

Your Name Is a Song

Ten Apples Up On Top!

Unicorn Academy 1 Sophia And Rainbow, is it available on Amazon?

Yes! But at Pricepulse we inform you when is the lowest price to buy the Unicorn Academy 1 Sophia And Rainbow

Should I buy the Unicorn Academy 1 Sophia And Rainbow now?

This is a great price to buy! There's a 69% probability this price will be higher. Our advise is Buy it now.

What is the current price of Unicorn Academy 1 Sophia And Rainbow?

What was the lowest price for the Unicorn Academy 1 Sophia And Rainbow?

The lowest historical price was $2.13