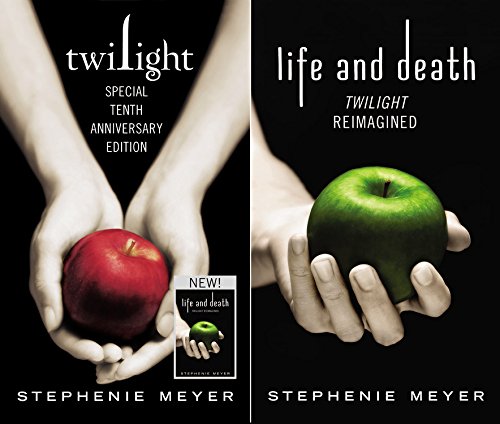 Product Description Twilight fans everywhere will adore this dual edition featuring an exclusive anniversary release of the first book and a gender-swapped reimagining of the classic immortal love story. In Life and Death, readers will be thrilled to experience this iconic tale told through the eyes of a human teenage boy in love with a female vampire. Packaged as an oversize, jacketed hardcover "flip book," this edition features nearly 400 pages of exclusive content as well as exquisitely re-imagined cover art. Fans of Bella and Edward will not want to miss the opportunity to see these iconic characters portrayed in intriguing new roles. The series has been praised as New York Times and USA Todaybestsellers, a Time magazine Best Young Adult Book of All Time, an NPR Best Ever Teen Novel, and a New York Times Editor's Choice. Enrapturing millions of readers since its first publication, Twilight has become a modern classic, leaving readers yearning for more. It's here! #1 bestselling author Stephenie Meyer makes a triumphant return to the world of Twilight with the highly anticipated companion, Midnight Sun: the iconic love story of Bella and Edward told from the vampire's point of view. "People do not want to just read Meyer's books; they want to climb inside them and live there." -- Time "A literary phenomenon." -- The New York Times About the Author Stephenie Meyer is the author of the #1 bestselling Twilight Saga, The Host, and The Chemist. Twilight has enraptured millions of readers since its publication in 2005 and has become a modern classic, redefining genres within young adult literature and inspiring a phenomenon that has had readers yearning for more. The series has sold 160 million copies worldwide and was made into five blockbuster feature films. Stephenie lives in Arizona with her husband. Her website is stepheniemeyer.com.