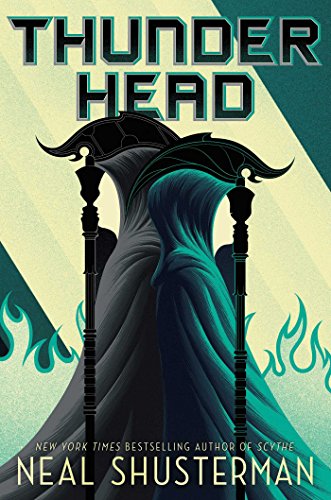 Product Description Rowan and Citra take opposite stances on the morality of the Scythedom, putting them at odds, in the chilling sequel to the Printz Honor Book Scythe from New York Times bestseller Neal Shusterman, author of the Unwind dystology. The Thunderhead cannot interfere in the affairs of the Scythedom. All it can do is observe—it does not like what it sees. A year has passed since Rowan had gone off grid. Since then, he has become an urban legend, a vigilante snuffing out corrupt scythes in a trial by fire. His story is told in whispers across the continent. As Scythe Anastasia, Citra gleans with compassion and openly challenges the ideals of the “new order.” But when her life is threatened and her methods questioned, it becomes clear that not everyone is open to the change. Will the Thunderhead intervene? Or will it simply watch as this perfect world begins to unravel? From School Library Journal POPGr 9 Up—A year has passed since the events of Scythe and Scythe Anastasia, once known as Citra Terranova, lives with her mentor, Scythe Marie Curie, and performs her gleanings in relative peace despite causing a rift in the Scythedom by giving her subjects a month to choose how they want to be gleaned, aka killed. Anastasia argues that it is more humane this way which earns her the favor of the "old world" scythes, those who feel they perform their job with dignity and humility rather than with joy and pride, like the "new world" scythes. Still, she cannot escape the tidbits of news surrounding her fellow apprentice Rowan Damisch, who now goes by the name Scythe Lucifer. He is hunting down corrupt scythes as a vigilante who deals death to those whom he feels besmirch the title. Ruling over this world is the Thunderhead, an omniscient artificial intelligence. However, it has no jurisdiction over the Scythedom and therefore has done nothing to stop Rowan. When an old enemy resurfaces, throwing the Scythedom into chaos, and Rowan unable to stem the flow of corruption on his own, the world begins to wonder if the Thunderhead will break its own laws and intervene. Shusterman wields his magic once again in this continuation. The exploration of how the Thunderhead operates and thinks, told through "diary entries," gives the story an extra dimension: how would an all-knowing, all-powerful AI think, and how would it process a flawed humanity? The climax and twist ending will leave fans of the series begging for the next installment. VERDICT A rare sequel that is even better than the first book.—Tyler Hixson, Brooklyn Public Library Review "Relish this intelligent and entertaining blend of dark humor and high death tolls." -- Kirkus, STARRED REVIEW "The stakes rise rapidly, and the plot races at a breathless pace." -- Shelf Awareness, STARRED REVIEW "Interweaving heady questions of morality, responsibility, loyalty, and power, Shusterman builds to a devastatingly intense conclusion that sends the characters and larger world into terrifying new territory." -- Publishers Weekly STARRED REVIEW "Shusterman wields his magic once again in this continuation... even better than the first book." -- School Library Journal, STARRED REVIEW "Shusterman widens the already impressive scope of his neat-future utopia while also keeping a deft finger on the pulse of our own turbulent times. Exceptionally clear-eyed and brutal in its execution." -- Booklist, STARRED REVIEW About the Author Neal Shusterman is the  New York Times bestselling author of more than thirty award-winning books for children, teens, and adults, including the Unwind dystology, the Skinjacker trilogy,  Downsiders, and  Challenger Deep, which won the National Book Award.  Scythe, the first book in his latest series, Arc of a Scythe, is a Michael L. Printz Honor Book. He also writes screenplays for motion pictures and television shows. Neal is the father of four, all of whom are talented writers and artists themselves. Visit Neal at StoryMan.com and Facebo

Current price$15.72
Since 2 months
Average price$13.79
Based on 3 years
Lowest price ever$10.44
24 months ago
Highest price ever$18.99
3 years ago
Amazing
Great
Average
High
It's not a good time to buy now, there's a 74% probability this price will decrease. Our advise is to Watch it.
Buy on Amazon

Welcome to the Symphony: A Musical Exploration of the Orchestra Using Beethoven's Symphony No. 5

The Reading Lesson: Teach Your Child to Read in 20 Easy Lessons

Thunderhead 2 Arc Of A Scythe, is it available on Amazon?

Yes! But at Pricepulse we inform you when is the lowest price to buy the Thunderhead 2 Arc Of A Scythe

Should I buy the Thunderhead 2 Arc Of A Scythe now?

It's not a good time to buy now, there's a 74% probability this price will decrease. Our advise is to Watch it.

What is the current price of Thunderhead 2 Arc Of A Scythe?

What was the lowest price for the Thunderhead 2 Arc Of A Scythe?