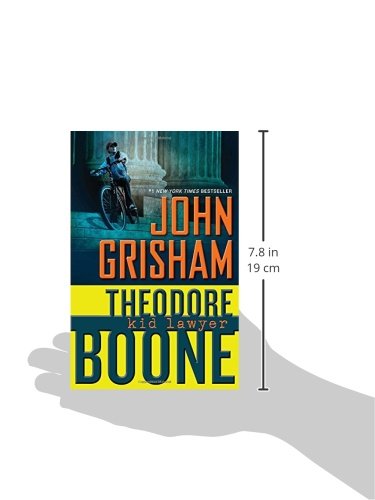 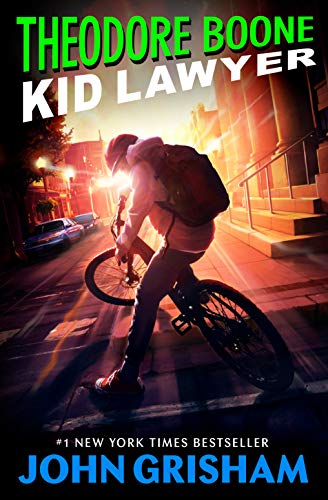 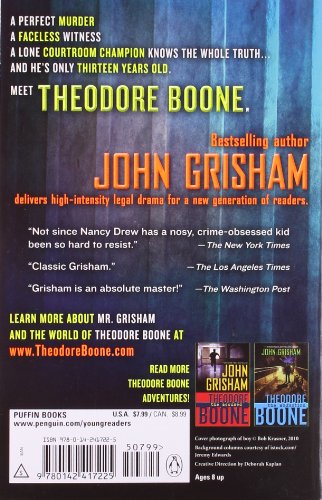 Product Description The thrilling young mystery series from internationally bestselling author John Grisham! In the small city of Strattenburg, there are many lawyers, and though he’s only thirteen years old, Theo Boone thinks he’s one of them. Theo knows every judge, policeman, court clerk—and a lot about the law. He dreams of being a great trial lawyer, of a life in the courtroom. But Theo finds himself in court much sooner than expected. Because he knows so much—maybe too much—he is suddenly dragged into the middle of a sensational murder trial. A cold-blooded killer is about to go free, and only Theo knows the truth. The stakes are high, but Theo won’t stop until justice is served. Review Praise for the Theodore Boone series "Not since Nancy Drew has a nosy, crime-obsessed kid been so hard to resist." - The New York Times "Classic Grisham." - The Los Angeles Times "Smartly written." -- USA Today "Grisham is an absolute master." --Washington Post"Edge-of-your-seat drama, sophisticated plotting, and plenty of spunk."-- Chicago Sun-Times"Gripping . . . I would recommend this book to anyone who loves a good mystery."-- Scholastic News  About the Author John Grisham is the author of a collection of stories, a work of nonfiction, three sports novels, four kids' books, and many legal thrillers. His work has been translated into forty-two languages. He lives near Charlottesville, Virginia. Excerpt. © Reprinted by permission. All rights reserved. Chapter 1 Theodore Boone was an only child and for that reason usually had breakfast alone. His father, a busy lawyer, was in the habit of leaving early and meeting friends for coffee and gossip at the same downtown diner every morning at seven. Theo’s mother, herself a busy lawyer, had been trying to lose ten pounds for at least the past ten years, and because of this she’d convinced herself that breakfast should be nothing more than coffee with the newspaper. So he ate by himself at the kitchen table, cold cereal and orange juice, with an eye on the clock. The Boone home had clocks everywhere, clear evidence of organized people.  Actually, he wasn’t completely alone. Beside his chair, his dog ate, too. Judge was a thoroughly mixed mutt whose age and breeding would always be a mystery. Theo had res­cued him from near death with a last-second appearance in Animal Court two years earlier, and Judge would always be grateful. He preferred Cheerios, same as Theo, and they ate together in silence every morning.  At 8:00 a.m., Theo rinsed their bowls in the sink, placed the milk and juice back in the fridge, walked to the den, and kissed his mother on the cheek. “Off to school,” he said.  “Do you have lunch money?” she asked, the same question five mornings a week.  “Always.”  “And your homework is complete?”  “It’s perfect, Mom.”  “And I’ll see you when?”  “I’ll stop by the office after school.” Theo stopped by the office every day after school, without fail, but Mrs. Boone always asked.  “Be careful,” she said. “And remember to smile.” The braces on his teeth had now been in place for over two years and Theo wanted desperately to get rid of them. In the meantime, though, his mother continually reminded him to smile and make the world a happier place.  “I’m smiling, Mom.”  “Love you, Teddy.”  “Love you back.”  Theo, still smiling in spite of being called “Teddy,” flung his backpack across his shoulders, scratched Judge on the head and said good-bye, then left through the kitchen door. He hopped on his bike and was soon speeding down Mallard Lane, a narrow leafy street in the oldest section of town. He waved at Mr. Nunnery, who was already on his porch and settled in for another long day of watching what little traffic found its way into their neighborhood, and he whisked by Mrs. Goodloe at the curb without speaking because she’d lost her hearing and most of her mind as well. He did smile at her, though, but she did not return the

Amazing
Great
Average
High
This is a great price to buy! There's a 76% probability this price will be higher. Our advice is Buy it now.
Buy on Amazon

Theodore Boone Kid Lawyer, is it available on Amazon?

Yes! But at Pricepulse we inform you when is the lowest price to buy the Theodore Boone Kid Lawyer

Should I buy the Theodore Boone Kid Lawyer now?

This is a great price to buy! There's a 76% probability this price will be higher. Our advice is Buy it now.

What is the current price of Theodore Boone Kid Lawyer?

What was the lowest price for the Theodore Boone Kid Lawyer?