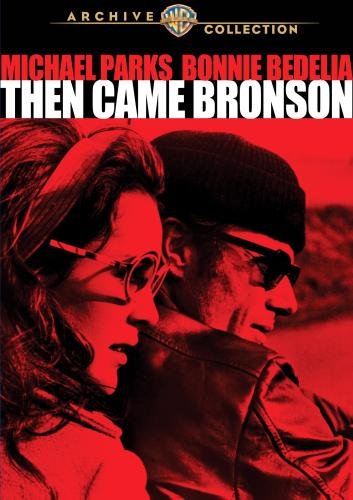 A Harley Roadster, a bedroll, a lonely stretch of highway: Jim Bronson (Michael Parks) is traveling where the road and the day take him, trying to make sense of things after the suicide of his close friend. He doesn't go far along a magnificent stretch of California's coastal Big Sur before he meets Temple Brooks (Bonnie Bedelia), a runway bride just as adrift as Jim is. Together, they'll ride that Harley all the way to New Orleans. Together, they might find what they're looking for. The pilot film for the same-titled 26-episode TV series, Then Came Bronson - seen here in an international version that has footage not seen in U.S. telecasts - came along in the free-wheeling era of Easy Rider. Hop on.

When sold by Amazon.com, this product will be manufactured on demand using DVD-R recordable media. Amazon.com's standard return policy will apply.

Current price$13.62
Since 2 years
Average price$16.87
Based on 9 years
Lowest price ever$9.20
2 years ago
Highest price ever$26.99
9 years ago
Amazing
Great
Average
High
This is a great price to buy! There's a 79% probability this price will be higher. Our advise is Buy it now.
Buy on Amazon

Then Came Bronson 1969 Tvm, is it available on Amazon?

Yes! But at Pricepulse we inform you when is the lowest price to buy the Then Came Bronson 1969 Tvm

Should I buy the Then Came Bronson 1969 Tvm now?

This is a great price to buy! There's a 79% probability this price will be higher. Our advise is Buy it now.

What is the current price of Then Came Bronson 1969 Tvm?

What was the lowest price for the Then Came Bronson 1969 Tvm?