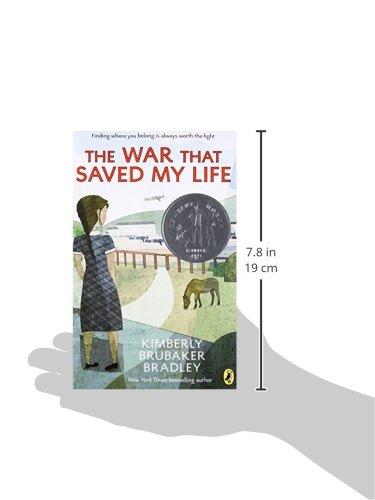 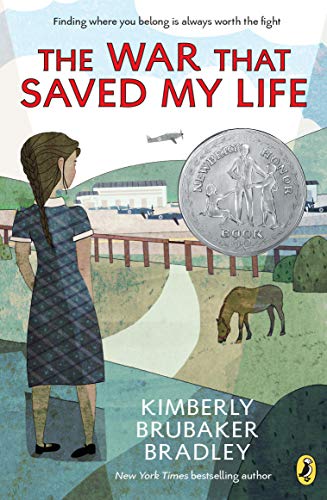 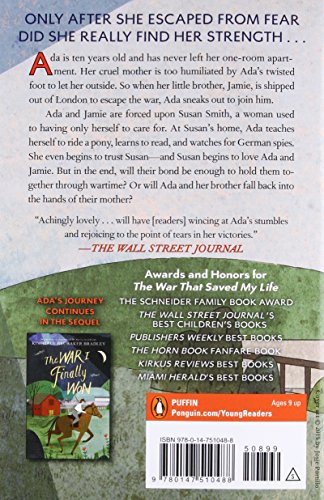 Product Description *Newbery Honor book*Winner of the Schneider Family Book Award This #1 New York Times bestseller is an exceptionally moving story of triumph against all odds set during World War II, from the acclaimed author of Fighting Words, and for fans of Fish in a Tree and Sarah, Plain and Tall.  Ten-year-old Ada has never left her one-room apartment. Her mother is too humiliated by Ada’s twisted foot to let her outside. So when her little brother Jamie is shipped out of London to escape the war, Ada doesn’t waste a minute—she sneaks out to join him.   So begins a new adventure for Ada, and for Susan Smith, the woman who is forced to take the two kids in. As Ada teaches herself to ride a pony, learns to read, and watches for German spies, she begins to trust Susan—and Susan begins to love Ada and Jamie. But in the end, will their bond be enough to hold them together through wartime? Or will Ada and her brother fall back into the cruel hands of their mother? "Achingly lovely...Nuanced and emotionally acute."— The Wall Street Journal "Unforgettable...unflinching." —Common Sense Media  ★ “Brisk and honest...Cause for celebration.” — Kirkus, starred review ★ "Poignant."— Publishers Weekly, starred review ★ "Powerful."— The Horn Book, starred review "Affecting."— Booklist "Emotionally satisfying...[A] page-turner."— BCCB “Exquisitely written...Heart-lifting.” — SLJ "Astounding...This book is remarkable."—Karen Cushman, author  The Midwife's Apprentice "Beautifully told."—Patricia MacLachlan, author of  Sarah, Plain and Tall "I read this novel in two big gulps."—Gary D. Schmidt, author of  Okay for Now "I love Ada's bold heart...Her story's riveting." —Sheila Turnage, author of Three Times Lucky Review A Newbery Honor Book Winner of the Schneider Family Book Award (Middle School) Winner of the Josette Frank Award Winner of the Sunshine State Young Readers Award Wall Street Journal Best Children's Books of 2015 New York Public Library's 100 Books for Reading and Sharing Chicago Public Library's Best of the Best Books 2015 Publishers Weekly Best Books of 2015 Kirkus Best Books of 2015 Horn Book Fanfare Book 2015 "Achingly lovely . . . Nuanced and emotionally acute, this vivid tale from the wartime home front will have readers ages 10-14 wincing at Ada's stumbles and rejoicing to the point of tears in her victories." — The Wall Street Journal ★ “Ada's voice is brisk and honest; her dawning realizations are made all the more poignant for their simplicity. . . . Things come to an explosive head, metaphorically and literally. Ignorance and abuse are brought to light, as are the healing powers of care, respect and love. Set against a backdrop of war and sacrifice, Ada's personal fight for freedom and ultimate triumph are cause for celebration.” — Kirkus, starred review ★ "Proving that her courage and compassion carry far more power than her disability, Ada earns self-respect, emerges a hero, and learns the meaning of home. "— Publishers Weekly, starred review ★ "Involving, poignant, nuanced . . . This is a feel-good story, but an earned one . . . distinct and powerful in its own right." — The Horn Book, starred review "There is much to like here—Ada's engaging voice, the vivid setting, the humor, the heartbreak, but most of all the tenacious will to survive." — School Library Journal "The home-front realities of WWII, as well as Ada’s realistic anger and fear, come to life in Bradley’s affecting and austerely told story, and readers will cheer for steadfast Ada as she triumphs over despair." — Booklist "Skillful, smooth . . . Ada's tough journey from brokenness to healing is poignantly credible in its development and emotionally satisfying outcome. . . . The feel-good appeal of the rescue fantasy combines with the increasingly tense World War II backdrop to make this an effective page-turner." — BCCB “Expertly operating on many different levels, this exquisitely written novel incorporates

Amazing
Great
Average
High
This is a great price to buy! There's a 84% probability this price will be higher. Our advise is Buy it now.
Buy on Amazon

Lies Girls Believe: And the Truth that Sets Them Free (Lies We Believe)

The Indigo Girl: A Novel

Lies Girls Believe: And the Truth that Sets Them Free (Lies We Believe)

The Indigo Girl: A Novel

The War That Saved My Life

Uncomfortable Conversations with a Black Boy

Mistakes That Worked: 40 Familiar Inventions & How They Came to Be

The War That Saved My Life, is it available on Amazon?

Yes! But at Pricepulse we inform you when is the lowest price to buy the The War That Saved My Life

Should I buy the The War That Saved My Life now?

This is a great price to buy! There's a 84% probability this price will be higher. Our advise is Buy it now.

What is the current price of The War That Saved My Life?

What was the lowest price for the The War That Saved My Life?