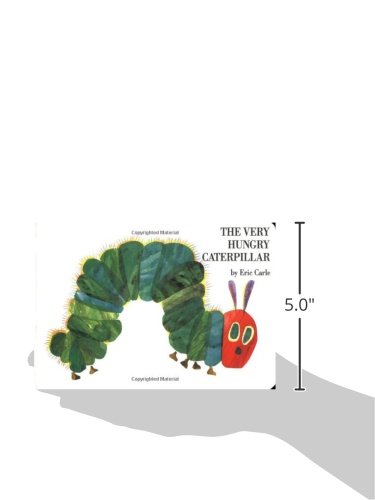 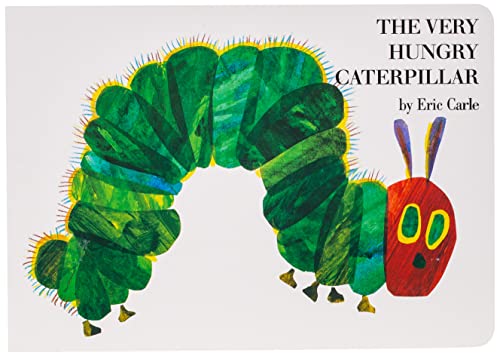 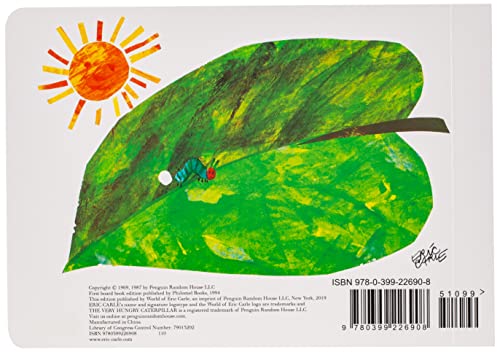 Product Description THE all-time classic picture book, from generation to generation, sold somewhere in the world every 30 seconds! A sturdy and beautiful book to give as a gift for new babies, baby showers, birthdays, and other new beginnings!Featuring interactive die-cut pages, this board book edition is the perfect size for little hands and great for teaching counting and days of the week. "The very hungry caterpillar literally eats his way through the pages of the book—and right into your child's heart..." —Mother's Manual"Gorgeously illustrated, brilliantly innovative..."—The New York Times Book Review Amazon.com Review "In the light of the moon a little egg lay on a leaf." So begins Eric Carle's modern classic, The Very Hungry Caterpillar. More than 12 million copies of this book have been sold in its original, full-sized edition, and the beloved tale of science and gluttony has been translated into 20 languages. This five-by-four-inch miniature edition is truly tiny, with tiny type, but it is a nice size for small hands to hold and flip through the pictures. Despite its diminished state, the book is complete in every detail, following the ravenous caterpillar's path as he eats his way through one apple (and the pages of the book itself) on Monday, two pears on Tuesday, three plums on Wednesday, and so on, through cherry pie and sausage--until he is really fat and has a stomachache. And no doubt you know what happens next! Kids love butterfly metamorphosis stories, and this popular favorite teaches counting and the days of the week, too. A fun gift package for caterpillar fans. (Baby to preschool) --Karin Snelson Eric Carle and Tomie dePaola: Author One-on-One About the Author Eric Carle is acclaimed and beloved as the creator of brilliantly illustrated and innovatively designed picture books for very young children. His best-known work, The Very Hungry Caterpillar, has been translated into 70 languages and sold over 55 million copies. Carle illustrated more than seventy books, many best sellers, most of which he also wrote, and more than 170 million copies of his books have sold around the world. In 2003, Carle received the Laura Ingalls Wilder Award (now called the Children’s Literature Legacy Award) for lifetime achievement in children's literature. In 2002, Eric and his wife, Barbara, cofounded The Eric Carle Museum of Picture Book Art (www.carlemuseum.org) in Amherst, Massachusetts, a 40,000-square-foot space dedicated to the celebration of picture books and picture book illustrations from around the world, underscoring the cultural, historical, and artistic significance of picture books and their art form. Eric Carle passed away in May 2021 at the age of 91. His work remains an important influence on artists and illustrators at work today. www.eric-carle.com