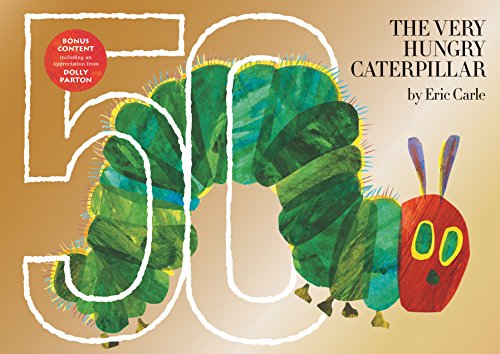 Product Description A new, limited golden anniversary edition in honor of 50 wonderful years, including rare bonus content. Happy birthday, Very Hungry Caterpillar! The Very Hungry Caterpillar has been crawling its way into kids' hearts for 50 years, and what better way to celebrate than by giving him a brand new cocoon! With a beautiful golden anniversary jacket (with an oversized "50" logo), along with a new introduction letter from Eric Carle himself, this anniversary edition will be sure to delight Caterpillar fans of all ages. Bonus content features an appreciation by prominent children's literacy advocate Dolly Parton, as well as an essay on the history and significance of the Caterpillar, including rare images of the original sketches and historic photos. About the Author Eric Carle is acclaimed and beloved as the creator of brilliantly illustrated and innovatively designed picture books for very young children. His best-known work,  The Very Hungry Caterpillar, has eaten its way into the hearts of millions of children all over the world and has been translated into more than 25 languages and sold over 12 million copies. Since the  The Very Hungry Caterpillar was published in 1969, Eric Carle has illustrated more than 60 books, many bestsellers, most of which he also wrote. Dolly Parton is one of the biggest country music stars and one of the bestselling recording artists of all time. Known as the "Queen of Country Music,” she has sold more than 100 million records. She has starred in a wide array of movies and has won eight Grammys and been nominated for two Academy Awards, five Golden Globes, and an Emmy.

Current price$17.59
Since 2 months
Average price$16.06
Based on 2 years
Lowest price ever$14.47
22 months ago
Highest price ever$22.99
2 years ago
Amazing
Great
Average
High
It's not a good time to buy now, there's a 71% probability this price will decrease. Our advise is to Watch it.
Buy on Amazon

Naipo Back Massage Seat Cushion for Chair, Deep Kneading Rolling and Vibrating - Full Back Massager for Home Office Use

Naipo Back Massage Seat Cushion for Chair, Deep Kneading Rolling and Vibrating - Full Back Massager for Home Office Use

Don't Check Out This Book!

You Are Enough: A Book About Inclusion

Charlie Thorne and the Lost City

If You Give a Pig a Pancake

Go, Dog Go (I Can Read It All By Myself, Beginner Books)

What's Inside A Flower?: And Other Questions About Science & Nature

My First Library : Boxset of 10 Board Books for Kids

Bronco and Friends: A Party to Remember

Wow in the World: The How and Wow of the Human Body: From Your Tongue to Your Toes and All the Guts in Between

The Very Hungry Caterpillar 50th Anniversary Golde, is it available on Amazon?

Yes! But at Pricepulse we inform you when is the lowest price to buy the The Very Hungry Caterpillar 50th Anniversary Golde

Should I buy the The Very Hungry Caterpillar 50th Anniversary Golde now?

It's not a good time to buy now, there's a 71% probability this price will decrease. Our advise is to Watch it.

What is the current price of The Very Hungry Caterpillar 50th Anniversary Golde?

What was the lowest price for the The Very Hungry Caterpillar 50th Anniversary Golde?