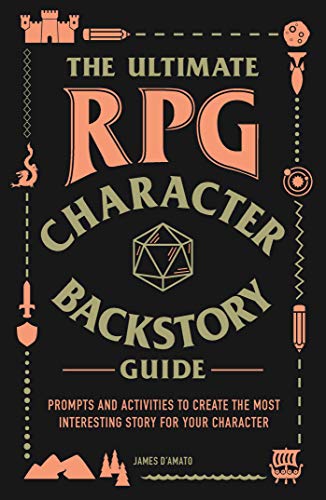 Product Description Ramp up your role-playing game (RPG) and make your character your own with this fun, interactive workbook—an essential addition to any player’s gaming kit. You’ve chosen your class, bought your weapons, and rolled for your stats, and you’re now the proud owner of your own RPG (role-playing game) avatar. But before you begin your adventure, there’s so much more you can do with your character to make him or her your own! Just how evil is she? What does his dating profile look like? Where did she get that scar? What does he want for his birthday? With fill-in-the blank narratives, prompts, and fun activities to help you customize your character at the start of the game, or build out your backstory as you play, The Ultimate RPG Character Backstory Book will help you fully imagine your character and bring them to life for the ultimate gaming experience! Review "Your character creating journey itself seems like a game, there’s space available to write in the book which I feel helps add to pencil and paper feel to the famed tabletop RPGs! What I like about this book is even if you don’t want to play with others, you could entertain yourself by creating characters for fun OR to help you create characters for a book or short story. From what I’ve read so far, this book is pure fun. If someone like me who knows little to nothing about traditional RPG’s could enjoy this book, then other newcomers to the genre and returning heroes from past fellowships will find something in this for them." ― Horror Fuel "I took my time reading through this book, trying out exercises with new and existing characters, and handed it off to friends, both those who D&D players and short story writers. I was pretty quickly getting questions about how much it cost, ($14.00 USD MSRP, though it’s currently on sale for a lower price several places), when it comes out, (October 2nd) and if I’d be willing to let them borrow it, which I think speaks volumes. I’ve found myself reaching for the book when trying to come up with a clever little something to fit into a character’s backstory while writing a script, and have had other writers suggest they’d use it to do the same. It’s not only a useful tool for building and fleshing out characters, it’s also written in an incredibly entertaining way, making it fun way to get the creative juices flowing." ― Gaming Trend "What I like about The Ultimate RPG Character Back Story Guide is that it is completely non-linear and you can make of it what you will. Even if you are not currently in a campaign The Ultimate RPG Character Back Story Guide is a fun workbook for any fantasy or RPG enthusiast. It may also be a great way to teach your children how to begin to establish their own role-playing characters and make for a fun night of creativity and adventure for the whole family. Longtime gamers know that having a character with a full and fascinating backstory makes for compelling gameplay and The Ultimate RPG Character Back Story Guide helps you do just that. Did I mention it was extremely affordable? You can pick up a copy on Amazon for a tick over $10. That’s less than almost any RPG accessory!" ― Geek Dad "James D’Amato has thought about the novice and the experienced player and has put together ‘The Ultimate RPG Character Backstory Guide’ to essentially have you be an RPG superstar…. Taking fear into account can make your role-playing character come to life by giving them a sense of humanity and creating interesting gameplay. That’s something only D’Amato has realized and gamers will be the better for it…. James D’Amato has done something special with his new book ‘The Ultimate RPG Character Backstory Guide.’ It’s akin to a graduate school course in role-playing games." ― Reviewfix "Overall, I think this is a really cool book for those of you that enjoy RPG kits, but... I think it’s also a great tool for (aspiring) character developers." ― SDGT ENT "There is an argument that could be made that

Amazing
Great
Average
High
Although this is an Average price, there's a 77% probability this price will be lower. If you can wait, our advice is to Watch it.
Buy on Amazon

The Ultimate Rpg Character Backstory Guide Prompts, is it available on Amazon?

Yes! But at Pricepulse we inform you when is the lowest price to buy the The Ultimate Rpg Character Backstory Guide Prompts

Should I buy the The Ultimate Rpg Character Backstory Guide Prompts now?

Although this is an Average price, there's a 77% probability this price will be lower. If you can wait, our advice is to Watch it.

What is the current price of The Ultimate Rpg Character Backstory Guide Prompts?

What was the lowest price for the The Ultimate Rpg Character Backstory Guide Prompts?