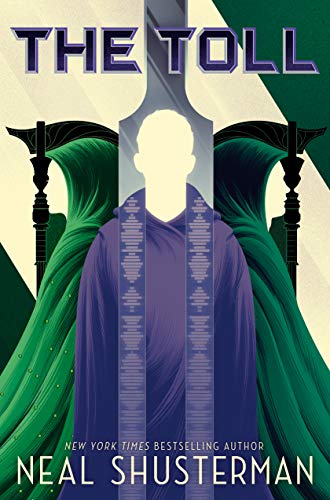 Product Description In the highly anticipated finale to the New York Times bestselling trilogy, dictators, prophets, and tensions rise. In a world that’s conquered death, will humanity finally be torn asunder by the immortal beings it created? Citra and Rowan have disappeared. Endura is gone. It seems like nothing stands between Scythe Goddard and absolute dominion over the world scythedom. With the silence of the Thunderhead and the reverberations of the Great Resonance still shaking the earth to its core, the question remains: Is there anyone left who can stop him? The answer lies in the Tone, the Toll, and the Thunder. Review "A furiously paced finale that reaches for the stars." -- Kirkus Reviews, October 15, 2019 "Nothing else like it out there... Readers will want to be here to see how it ends." -- Booklist, November 1, 2019 * "Shusterman weaves together story lines of old and new characters to create an explosive series end... Fans of the first two books will be (and have been) clamoring for this finale. Get it to them as soon as possible." -- School Library Journal STARRED REVIEW, November 2019 * "The stellar conclusion to Shusterman’s Arc of a Scythe trilogy is a gripping adventure that never stops building momentum." -- Publishers Weekly STARRED REVIEW, October 28, 2019 "A stunning and entirely satisfying ending... Breathless action sequences will appeal to readers more inclined toward an adrenaline rush, while thought-provoking interrogations of love, religion, humanity, and technology will intrigue fans of more contemplative dystopias." -- BCCB, December 1, 2019 About the Author Neal Shusterman is the  New York Times bestselling author of more than thirty award-winning books for children, teens, and adults, including the Unwind dystology, the Skinjacker trilogy,  Downsiders, and  Challenger Deep, which won the National Book Award.  Scythe, the first book in his latest series, Arc of a Scythe, is a Michael L. Printz Honor Book. He also writes screenplays for motion pictures and television shows. Neal is the father of four, all of whom are talented writers and artists themselves. Visit Neal at StoryMan.com and Facebook.com/NealShusterman. Excerpt. © Reprinted by permission. All rights reserved. Chapter 1: Surrender to the Momentum We of the SubSaharan region take extreme umbrage with High Blade Goddard’s removal of gleaning quotas. The quotas have stood since time immemorial as a way to regulate the taking of life—and, while not officially one of the scythe commandments, quotas have kept us on track. They have prevented us from being either too bloodthirsty, or too lax. While several other regions have now abolished quotas as well, SubSahara stands with Amazonia, Israebia, and numerous other regions in resisting this ill-advised change. Further, any and all MidMerican scythes are banned from gleaning on our soil—and we urge other regions to join us in resisting Goddard’s so-called new order from establishing a chokehold on the world. —Official proclamation from His Excellency, High Blade Tenkamenin of SubSahara

Current price$11.99
Since 9 hours
Average price$13.65
Based on 19 months
Lowest price ever$11.99
9 hours ago
Highest price ever$18.99
19 months ago
Amazing
Great
Average
High
This is absolutely the best time to buy. Don’t miss out, there's 45% probability of this price being higher soon. Buy now.
Buy on Amazon

The Toll 3 Arc Of A Scythe, is it available on Amazon?

Yes! But at Pricepulse we inform you when is the lowest price to buy the The Toll 3 Arc Of A Scythe

Should I buy the The Toll 3 Arc Of A Scythe now?

This is absolutely the best time to buy. Don’t miss out, there's 45% probability of this price being higher soon. Buy now.

What is the current price of The Toll 3 Arc Of A Scythe?

What was the lowest price for the The Toll 3 Arc Of A Scythe?

The lowest historical price was $11.99