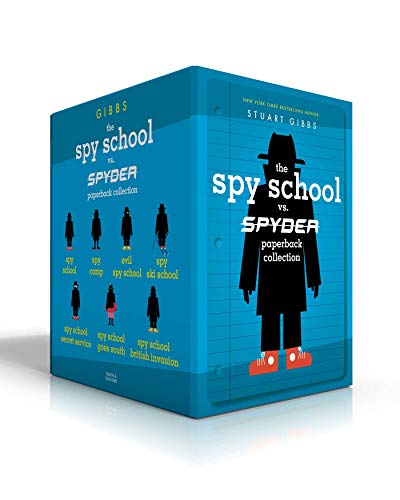 Product Description The first seven books in the New York Times bestselling Spy School series by Stuart Gibbs are now available in a collectible paperback boxed set! Can an undercover nerd become a superstar agent? Ben Ripley sure hopes so—and his life may depend on it! When Ben Ripley is recruited to the CIA’s Academy of Espionage, it’s a dream come true. But as soon as he gets on campus, Ben finds out that Spy School is way more deadly than debonair. And given his total lack of coordination and failure to grasp even the most basic spying skills, Ben begins to wonder what he’s doing here in the first place. Luckily, through a series of hilarious misadventures, Ben realizes he could actually become a halfway decent spy…if he can survive all the attempts being made on his life! This fast-paced paperback boxed set is ideal for newcomers to the series and loyal fans alike and includes: Spy School Spy Camp Evil Spy School Spy Ski School Spy School Secret Service Spy School Goes South Spy School British Invasion About the Author Stuart Gibbs is the N ew York Times bestselling author of the Charlie Thorne series, the FunJungle series, Moon Base Alpha series, and Spy School series. He has written screenplays, worked on a whole bunch of animated films, developed TV shows, been a newspaper columnist, and researched capybaras (the world’s largest rodents). Stuart lives with his family in Los Angeles. You can learn more about what he’s up to at StuartGibbs.com.

The Spy School Vs Spyder Paperback Collection Spy, is it available on Amazon?

Yes! But at Pricepulse we inform you when is the lowest price to buy the The Spy School Vs Spyder Paperback Collection Spy

Should I buy the The Spy School Vs Spyder Paperback Collection Spy now?

What is the current price of The Spy School Vs Spyder Paperback Collection Spy?

What was the lowest price for the The Spy School Vs Spyder Paperback Collection Spy?