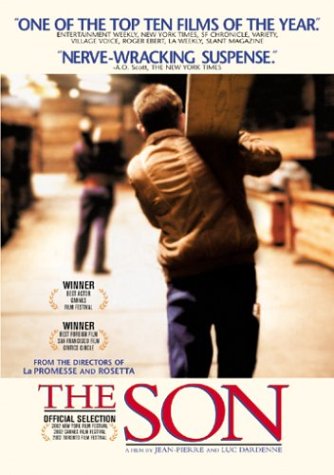 The brothers Dardenne craft lean, unfancy movies, full of ordinary people, with no special effects--but the emotional impact of their movies (which include the superb La Promesse and Rosetta) is devastating. In The Son, a carpentry teacher named Olivier (Olivier Gourmet) accepts a new student into his class after having first rejected him; it is soon revealed that this new boy, Francis, is responsible for the death of Olivier's son. But Olivier takes Francis under his wing--is Olivier planning on taking revenge? Is this a phenomenal act of compassion? Is he simply tormenting himself? The movie watches Olivier engage in his daily tasks without comment, yet every scene is almost unnervingly dense with emotion (it's no wonder that Gourmet won the Best Actor award at Cannes for this performance). The Son builds complex and potent feelings from utterly mundane moments. It's simply an astonishing feat of moviemaking. --Bret Fetzer
Amazing
Great
Average
High
This is a great price to buy! There's a 58% probability this price will be higher. Our advise is Buy it now.
Buy on Amazon