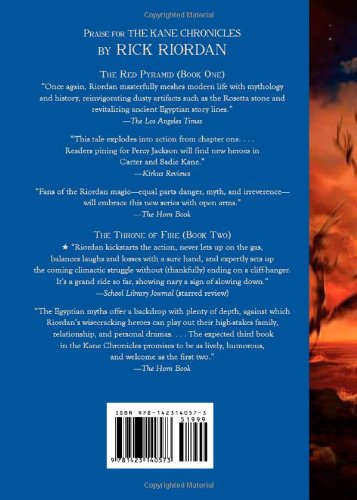 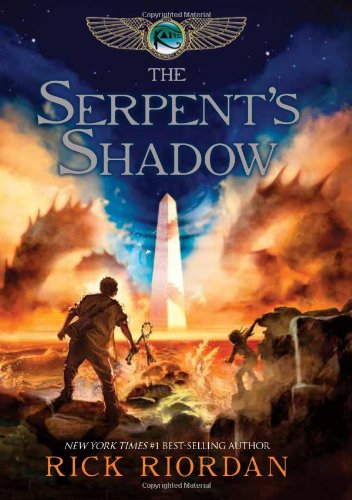 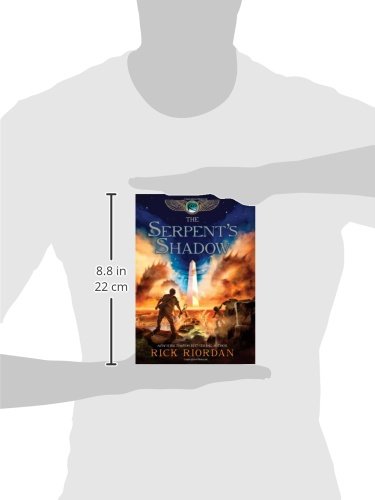 Product Description In their exciting final adventure, Carter and Sadie Kane are the mortal world's only hope of defeating the forces of chaos. "Fans of the Riordan magic--equal parts danger, myth, and irreverence--will embrace this new series with open arms."- The Horn Book #1 New York Times best-seller Rick Riordan, a master at making mythology fun and relevant, takes on ancient Egypt Told in two points of view, one male and one female Combines witty, relatable heroes, gods and monsters, prophecies and curses, and non-stop action Ideal for middle grade readers, but older readers will enjoy it, too Soon to be adapted into a movie for Netflix, with Rick attached as producer He's b-a-a-ack! Despite their best efforts, Carter and Sadie Kane can't seem to keep Apophis, the chaos snake, down. Now Apophis is threatening to plunge the world into eternal darkness, and the Kanes are faced with the impossible task of having to destroy him once and for all. Unfortunately, the magicians of the House of Life are on the brink of civil war, the gods are divided, and the young initiates of Brooklyn House stand almost alone against the forces of chaos. The Kanes' only hope is an ancient spell that might turn the serpent's own shadow into a weapon, but the magic has been lost for a millennia. To find the answer they need, the Kanes must rely on the murderous ghost of a powerful magician who might be able to lead them to the serpent's shadow . . . or might lead them to their deaths in the depths of the underworld. Nothing less than the mortal world is at stake when the Kane family fulfills its destiny in this thrilling conclusion to the Kane Chronicles. Amazon.com Review Amazon Exclusive: What are Sadie and Carter Kane Reading? Sadie Kane: "Reading? You should talk to my brother the genius… Sometimes I read books about London and occasionally I try to learn new hieroglyphics, but mostly I’m too busy with trainees and trying to defeat Apophis.” My Reading List: • The Symbolic World of Egyptian Amulets by Philippe Germond • Treasures of the British Museum by Marjorie Caygill • The Annotated Pride and Prejudice by Jane Austen • A Tale of Two Cities by Charles Dickens • The Adventures of Sherlock Holmes by Sir Arthur Conan Doyle • City Secrets London: The Essential Insider’s Guide by Robert Kahn and Tim Adams • The Importance of Being Earnest by Oscar Wilde • Concise Dictionary of Middle Egyptian by R.O. Faulkner • Egyptian Love Spells and Rituals by Claudia Dillaire • Gone With the Wind by Margaret Mitchell Carter Kane: “I read a lot. That’s why Sadie calls me Mr. Wikipedia. My dad is a pretty big history buff, so I read classics and try to learn as much as I can about Egypt and my ancestors. It’s good research when you’re trying to saving the world.” My Reading List: • The Penguin Historical Atlas of Ancient Civilizations by John Haywood • Falconry: The Essential Guide by Steve Wright • The Adventures of Huckleberry Finn by Mark Twain • The Autobiography of Martin Luther King, Jr., by Martin Luther King and Clayborne Carson • The Egyptian Book of the Dead translated by Robert P. Winston and Wallace Budge • Civil Disobedience by Henry David Thoreau • The Pharaohs of Ancient Egypt by Elizabeth Payne • The LA Lakers: 50 Amazing Years in the City of Angels by the LA Times Sports Staff • Britannia in Brief: The Scoop on All Things British by Leslie Baker and William Mullins • The Three Musketeers by Alexandre Dumas Review Joined by the Egyptian gods who helped them in previous books (The Red Pyramid, rev. 7/10; The Throne of Fire, rev. 9/11) as well as their fellow teen magicians Zia and Walt, Sadie and Carter Kane face the culmination of peril in this third volume in the Kane Chronicles. Apophis, the Serpent of Chaos, is attempting to achieve his legendary goal of swallowing the Sun God, Ra, and destroying all creation. If Sadie and Carter can collect the knowledge and tools they need from journe

The Serpents Shadow The Kane Chronicles Book 3, is it available on Amazon?

Yes! But at Pricepulse we inform you when is the lowest price to buy the The Serpents Shadow The Kane Chronicles Book 3

Should I buy the The Serpents Shadow The Kane Chronicles Book 3 now?

What is the current price of The Serpents Shadow The Kane Chronicles Book 3?

What was the lowest price for the The Serpents Shadow The Kane Chronicles Book 3?